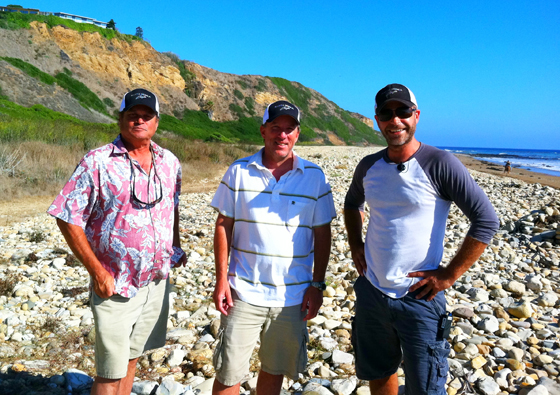 Showtime’s beloved Californication starring David Duchovny finished filming its 5th season this past summer. Like the previous seasons before, the producers tapped production sound mixer Dan Church to set the faders for the show’s audio tracks. Recently, Dan was kind enough to take time out of his day to talk Cali-shop and about his career’s first Emmy nomination.

S&P:  Congratulations, Dan. When I contacted you Emmy morning, you seemed pretty surprised. How are you feeling now about being nominated?
I was completely caught by surprise. Todd Grace our rerecording mixer has submitted for us every year for both Cali and The Mentalist and nothing has come of it, so this year it wasn’t even on my mind.  I feel so honored. Just to be recognized by the membership is really special.

S&P:  For such a fantastic show that has both great writing and acting — was it odd to be the only one on the show nominated this year?
Yeah it really is. The amount of talent on the show is amazing.

S&P:  What’s your favorite thing about working on Californication?
As my Utility, Lance says, “It’s the best summer job ever”.  It’s really a difficult show, tough locations, lots of ad libs, a lot of wide and tight, but our producers really make an effort to keep the days short, and the scripts keep us laughing all day long.  Plus we only do 12 episodes so we’re only together for 13 weeks which is not enough time to get sick of each other.

S&P:  Who’s on your sound crew with you?
Abel Schiro on boom and Lance Wandling is my utility.  You can be the best mixer on the planet, but without good guys swinging the mics, you don’t have a chance and these guys rock.

S&P:  Tell us a little bit how you work with your guys on set.
Abel is kind of our point man on the set and lets me know when things are changing.  Lance does most of the wiring of the actors and a lot of second boom.  Many times I’m just along for the ride mixing my little heart out. Of course, all the decisions on how and what we’re doing run through me, but ninety-five percent of the time after watching a rehearsal, we all come up with the same plan. Having been together for five years now, we pretty much have the same work brain.

S&P:  How did you put together your cart for such a location driven show?
All my essential gear is in one rack mount case on a mag liner so when we arrive on location there is virtually no set up.  Just pop off the front and back of the case, power up and we’re good to go.

S&P:  What keeps you going back to Californication?
It’s just a great show, run by a group of producers who really care about their crew and go out of their way to keep us all together every season.  It’s just good to go to work every day and laugh.

S&P: Being a family man yourself, what piece of advice would you give the troubled Hank Moody?
Hank’s going to hell.  I guess Hank’s biggest problem is that he cares about people a little too much.  Plus, he keeps getting hit on by absolutely gorgeous women.  Of course all the drugs and alcohol don’t help.

S&P: What’s the savior piece of gear on this show?
There is no savior piece of gear per se, but the way we wire David Duchovny is something we call “The Collini”, after Nancy Collini, his costumer.  He wears a lot of tight t shirts and she came up with cutting a tiny hole in the ribbed neck of the shirt at the shoulder.  We then thread a Sanken through the hole to the front, tie a little knot in the wire at the hole and fasten it with a tiny safety pin so it doesn’t pull out.  If it weren’t for that, wiring him would be as challenging as wiring some of the women on the show.

S&P:  The new season starts this coming January — can you give away any secrets to the fans?
Hank’s still going to hell!  If you’re a fan of the show it’s another great season.  They always do a great job of casting and this season is no exception. A few characters from past seasons make a return and a big name from the hip-hop world is a big part of season five.

S&P:  If you were able to bring home the Emmy, what would it mean for you and your career?
As I said earlier, just being nominated is such an honor, so winning would just be incredible.  I would love to think that an Emmy would really give my career a boost and the job offers will come flooding in, but that’s not how this business works.  I’m pretty darn lucky already and in these tough times to be working on these shows is really a blessing.

S&P would like to thank Dan for taking the time to let us behind the scenes of Californication. You can catch the new season January 8th on Showtime and the Primetime Emmys September 18th. The Creative Arts Award show is September 10th and will air on the Reelz Channel September 17th at 8:00 PM ET and at 8:00 PM PT.