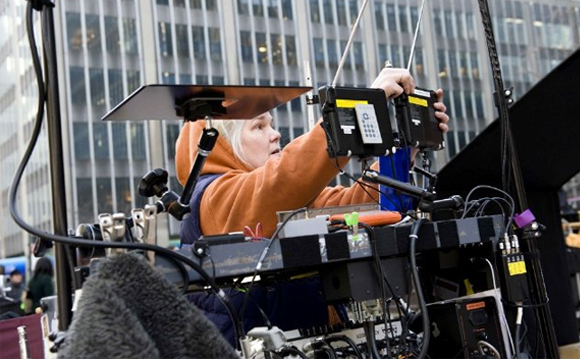 Showtime’s award winning Nurse Jackie is back again with another 5 nominations this year. Among them were the talents from the sound mixing crew for the episode Handle Your Scandal. Alongside re-recording mixer Peter Waggoner, was production sound mixer Jan Mclaughlin, CAS, who was kind enough to share her perspective in a sweet interview by S&P.

S&P: Nurse Jackie is your first nomination. What was your reaction when you heard?
McLaughlin: I had half-forgotten it was nomination day until a colleague texted me early in the morning with a, “Congrats!” Frankly, I thought the text must have referred to Edie’s nomination since her performances in season 4 are as good as anything she’s ever done, and as always had high hopes for comic genius Merritt Wever. I looked it up.

My name was listed on the press release as, ‘Jan McLaughlin, M.P.S.E, Production Sound Mixer’ so I was then sure it was a mistake, since I’m not a member of M.P.S.E..

S&P: What was it about the season finale (Handle Your Scandal) that made you submit it for Emmy consideration?
McLaughlin: I deferred to our gentleman Post Production Producer Brad Carpenter and Supervising Sound Editor/genius Steve Borne, figuring they know better than anyone what sounds and would best work for the Emmy process.

S&P: Was this the first time you’ve submitted?
McLaughlin: No. Showtime graciously put me forth for A.T.A.S. membership and submitted an episode for S3, but we didn’t get the nod. Certainly didn’t expect to my first year. Hell, didn’t expect to this time around either.

Nurse Jackie is my virgin show as a department head. On some self-depreciating, chick-based level, I suspect the nod’s because I’m a girl. On typing that last sentence re-watched a couple episodes: 410 (our submitted episode) and 404 (with Ms. Perez) and they sounded really good. We do good work Mr. O’Brien, Ms. Mader and me, and everyone in the crew and cast, really, and I’m really glad the work matters.

S&P: Besides your fellow nominee, Peter Waggoner, who’s on your sound crew on the day-to-day?
McLaughlin: If we ever got any good Nurse Jackie dialog, it was because my excellent team–the unflappable Brendan O’Brien on boom and mess-with-Michelle-Mader-at-your-peril on 2nd boom–had earned the respect of the entire crew and cast in whose hands the quality of our work product ultimately rests.

S&P: You worked a bit on the The Sopranos with Edie Falco, is that how you landed the Nurse Jackie job?
McLaughlin: I’m guessing Edie had a say, but that’s only because when I popped my head in the makeup room day one she welcomed me by name, and I sense crew atmosphere matters a lot to her. She plays #1 with aplomb and leads by dignified, professional example.

Daresay I owe this job to John Cameron Mitchell. EP Richie Jackson reps John, with whom I’d just finished a little movie Rabbit Hole. The evening of my interview with Richie, he and John were to dine together. I suggested Richie ask John if I’d be OK. It was a lock. John Cameron Mitchell is extraordinary in every way and a huge hero of mine.

S&P: Tell us a little bit about life on set of Nurse Jackie.
Nurse Jackie has been in my experience an estrogen-based, ‘cooperative’ environment. If you haven’t experienced the difference, you have that to look forward to.

S&P: Most crews become family-like, what’s something behind-the-scenes you could tell us about Nurse Jackie the public may not know about?
McLaughlin: All I can figure is somebody above the line read Robert I. Sutton’s book, The No Asshole Rule and took it to heart. It doesn’t get any better. 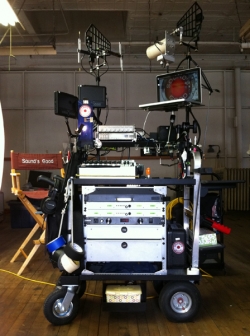 S&P: The workhorse on Nurse Jackie looks like the Audio Developments 255 mixer. How else have you set the gear on your to help track the sounds of this Showtime hit?
McLaughlin: I wouldn’t characterize the AD-255 as my ‘workhorse’, even though it’s the thing through which all things must pass. Its reliability, transparent pre’s and in/out perfection for my setup make me confident and happy [knocking on wood].

If I had to pick a workhorse, it would be my Zaxcom wireless collection and new Nomad. I see Glenn Saunders’ TX-as-recorder solution to the increasingly-crowded RF spectrum as elegant; moreover, it fulfills my requirement that all gear function as anti-perspirant.

The Nomad with MicPlexer and two QRX units will act as a bagged remote receiver when set is too small or inaccessible because of stairs. Plop the bag down, run up to 3000 feet of cat5 cable and I’m good to go from wherever. As a woman, getting the cart into stair-heavy sets is a battle I’ve chosen not to pick unless I have to; grip department help costs beer.

S&P: How do you set up your board and mix Nurse Jackie?
McLaughlin: My mix is often simply a process of finding the right balance between the wires, plants, and boom mics, so that the wires sound as open and real as possible. Making the transitions among them transparent is my favorite part. Drives me crazy to hear mixes that are clearly all wireless mics.

S&P: Even after four seasons, what are some location challenges you and crew face in a given episode? How do you overcome them?
McLaughlin: Surprisingly, there were a lot of S4 issues to be addressed, not least of which a story-point uniform change that at first brought forth noisy poly blend scrubs for all. Starting S3, had managed to get cotton scrubs for both Edie and Merritt (who’s always wired to be sure to catch her surprise, breathless exhortations). After two episodes of poly blend scrubs and a note from me, cotton scrubs were manufactured for Edie and Merritt by our fabulous wardrobe department. Thank goodness.

There was a sub-texted wardrobe-related tie war between Drs. Coop and Cruz, whereby Coop’s ties got increasingly more expensive and noisily silky to match Cruz’s already-high-end-silky ties. I called my mentor Mathew Price whose expert “White Collar” tie wiring work has been a constant source of wonderment and conjecture, and he generously shared his top secret technique. That saved us. Thanks, Matt! And no, I’m not telling.

Equally challenging was the change of our main exterior hospital location to the five-lane, bus routed, working-hospital 1st Avenue, within line-of-sight of the RF-heavy Empire State Building. Nothing to be done but beg ’em if they have a choice to change it, and deliver the sad message that some dialog will undoubtedly have to be replaced. It appears some of the whispery stuff was replaced, but I think they were able to use more than I thought they would. Either that, or the ADR team, dialog cutters and cast are more brilliant than I gave them credit for, because some of that material sounded very good and didn’t feel like ADR.

Finally, the look of the show shifted to feature more low-angle, see-the-ceiling shots that caused me to permanently break out my stash of plant mic rigs and double down on double booming. That was a lot of fun.

What sits in my back pocket is an always-deeper knowledge of what my colleagues know that I don’t know, and in recent years (thanks to Jeff Wexler’s pro sound  forum), a sense of belonging to the sound-for-film-and-television community that gives me license to call any one of these brilliant individuals for advice.

S&P: As a sound mixer, what has been one of your favorite episodes to track? Why?
McLaughlin: Sooooo many…but by far my favorite is Ep. 404 that guest stars Rosie Perez. Rosie/Edie and Rosie/Edie/Emily. Two scenes. The chemistry was…is…something to behold: to be in the presence of, being the first to critically hear, my truth meters going hot.

This was not my first job with Rosie, so I knew what glory to expect. Took the opportunity to recall with her our first project (very early in my career) when I managed to stab her but good with a safety pin. Her fault. She immediately and graciously apologized to a mortified young mixer. I am forever grateful for the oft-uttered sentence that moment of horror and Rosie gave me: “Don’t do anything stupid, I’m goin’ in.”

S&P: You’ve worked for the last 20 years in various roles from utility on up to sound mixer, what has been the hardest obstacle for you on set as a woman?
McLaughlin: Three things come immediately to mind: Pride, fear and menopause.

Pride: As a young woman accustomed to being in the company of managerial men, cussing and pride got me through a few situations in which I was clearly not welcome because I peed sitting down. In an early gender-based challenge, I was among the first women admitted to the theretofore all-male University of Pittsburgh Varsity Marching Band, as a member of which for the first time in my life I played piccolo. As a result of my level of expertise, I had only two notes to play: the trill on the Star Spangled Banner. They tried their damnedest to haze all six of us chicks OUT.

Pride and cussing seemed to endear me to even the most vehemently anti-chick among the upperclassmen, and so I later wagered all my survival chips on pride and cussing. That bet paid off; for good or ill, the lesson stuck.

Men. Mostly men. And more men. I quietly made my way, and endeavored not to take advantage of being a woman, wanting to do it–if I ever did it–fair and square.

The downside is, that pride side of the bet left me too long too proud to ask for help or proffer myself as boom/utility rather than the self-declared mixer I aspired to be.

When I finally wised up and thirded, I kept my head down, my mouth shut and…and…my eyes open. That process of learning took longer, and I’ve re-invented far too many wheels as a result. Since then, I’ve come to realize that a proper third and proper boom operator are positions that require enormous skill. I would have benefitted from doing both jobs sooner and longer.

Fear: It’s challenging to adjust to the testosterone atmosphere wherein within hours; a gaggle of men will have determined by various means their precise place in the food chain. Women by contrast are cooperators. Cooperators are sometimes seen–in the testosterone model–as weak, but I think it’s just a different and equally-effective way of playing. Understanding and respecting the differences is a first step toward allowing each work strategy to blossom.

That hierarchical process made me for a long time afraid to actively put myself forward. Don’t like to compete professionally. Either my work and work style speak memorably for themselves or they do not. A recent study characterized ‘Women’ as unlikely or unable to put themselves forward. In other words, self-promotion does not come naturally to women, which is why I recently decided to rent cojones from my awesome agent, Doug Apatow.

Menopause: By far the most difficult chick-related obstacle was a two-year stretch of impossible-to-contain menopausal emotional unpredictability. Impossible to explain because on set there are no excuses. I exhibited conduct unbecoming: I cried all the time for no apparent reason. Sheesh. Thankfully, it was temporary, but those two years really, really sucked.

S&P: What can fans look forward to for season 5?
McLaughlin: For my part, look forward to what our new showrunner Clyde Phillips brings to the table given his Dexter cred. Love the oh-so-darkly-funny Dexter and how it continually surprises. Nurse Jackie similarly makes you laugh and on the exhale proffers a gut punch. Seems like Clyde will be a great fit for a raucous fifth season.

S&P would like to thank Jan for taking the time out for our readers. You can catch the all new season of Nurse Jackie on Showtime in 2013. The Creative Arts Emmys will be held September 15th, 2012 at the Nokia Theatre LA LIVE in Los Angeles.