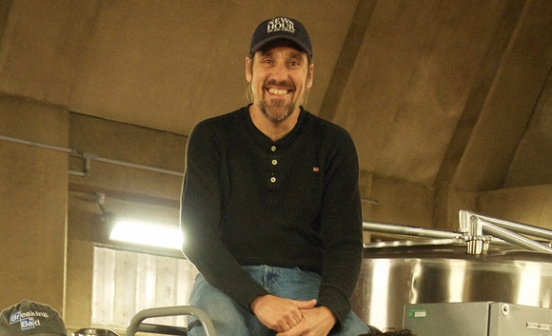 Breaking Bad is one of those shows when you start watching it, you’re hooked. You’re not exactly sure why you’re hooked, and when you start to explain to your friend why they should watch it too, you end up just saying it’s awesome, watch it. Production sound mixer, Darryl L. Frank, CAS, is just one piece of the puzzle that helps make this AMC drama about a high school chemistry teacher turned criminal so compelling. Now Emmy nominated, we sat down with Darryl to talk meth, explosions and one of the more giving characters in the show – Albuquerque, New Mexico.

S&P: This isn’t your first time being nominated for an Emmy, but it is for a television series. Do you look at it any differently?
Frank: Last time I was nominated for the miniseries Comanche Moon in 2008, it was such a surprise. Now being nominated for Breaking Bad, it’s even better. It’s just a different beast. We shoot 8 day episodes and it’s grueling so it’s very rewarding to see my name up there with everyone else’s.

S&P: Was this the first year you submitted?
Frank: I’ve been on and off the show. I did the pilot and then didn’t come back till the beginning of season three. That was the first year the show was getting some buzz when Bryan Cranston won for best acting. The show usually submits every year, but this is the first we’re up for consideration in the sound mixing category.

S&P: What made you choose the Face Off episode to submit?
Frank: I went back and forth on that with Face Off and the first episode of the season four, Box Cutter. I got nominated for a CAS award for Face Off, but the first episode had a lot of good things going on audio wise. There was a scene in the meth lab, about 8-9 minutes, with no dialogue at all. Just one-liners and tons of suspense. It made for a really interesting track. In the end, I went with Face Off, because it was written and directed by the show’s creator, Vince Gilligan, and being the season finale, it had a lot going on in it as well. 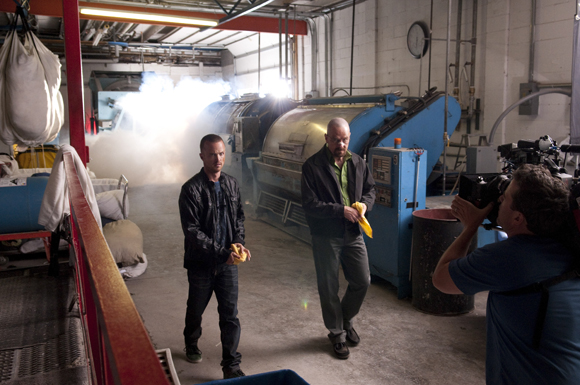 S&P: This is a very location driven show. Can you tell us about some of the challenges you face shooting in Albuquerque?
Frank: I love being out on locations. It’s part of the battle. Albuquerque is a beautiful place to shoot in. To the contrary of what most people believe, one of the first movies ever shot was not in Hollywood, but right here in New Mexico. Thomas Edison filmed a movie called Indian Day School back in 1898 in Santo Domingo. The city of Albuquerque is very much part of the show. There are only 3 or 4 studios here, but you don’t come here to shoot in a studio, the natural sunlight is just too perfect.

We do have our uphill battles. We’ll run into some real crappy locations, most with no electricity. Right now, we are shooting in a pest control garage. It’s basically a mechanics garage, but it sits on one of the busiest streets in Albuquerque. Not to mention, it’s across the street from an airport and a military base. It’s funny. We’ll be in the middle of shooting and they’ll launch F-whatever off the pad and the walls will start shaking. We tried moving to night shooting, but apparently, the base likes to do drills then too. So we’ll hear a bunch of Blackhawk helicopters taking off for training. At the time, the track sounds pretty bad, but in the end, it works out.

S&P: That’s not very sound friendly at all. When you get a script in your hand, how do you prepare?
Frank: Episode one is probably the easiest for us. Everyone is calm and knows what’s going on. We’ve been location scouting and all is great. After a few weeks, our nose is to the grind with production. We’re working. I don’t have time to send one of my guys to the production meetings or go to a scout to see what kind of obstacles we’ll have in front of us. I’ll usually read the script so I know what’s ahead, but we work from the hip on most days.

S&P: How do you approach a scene in terms of your mic’ing?
Frank: Our creator, Vince, really likes to keep the sound of the show as realistic as possible. You’ll see a dramatic scene in a film and it’s cut perfectly, but that’s not how people talk. On Breaking Bad, they like it when actors overlap their dialogue, step on a line or if a chair squeaks. It’s reality or as close to reality as we can for a drama.

We are running two cameras 80% of the time — wide and tight. I try to give our re-recording mixers Jeff Perkins and Eric Justen a lot to play with. If there is dialogue in the scene, we always run wires. I hate to do it, but that’s just the way Vince wants it as he doesn’t like doing ADR. And, of course, we’ll run one or two booms in the scene depending on its needs. I also do off camera boom as much as possible to provide post some of those dialogue overlaps.

For car scenes, which thankfully, we’re moving away from process trailers and doing more practical cars, I’ll use a combination of four mics. I don’t like to wire the actors because of how it sounds. If you listen to the show, Jeff and Eric really leave the mic inflection in the mix so the sound is closer to the camera’s perspective as a focal point. I like what they do a lot. 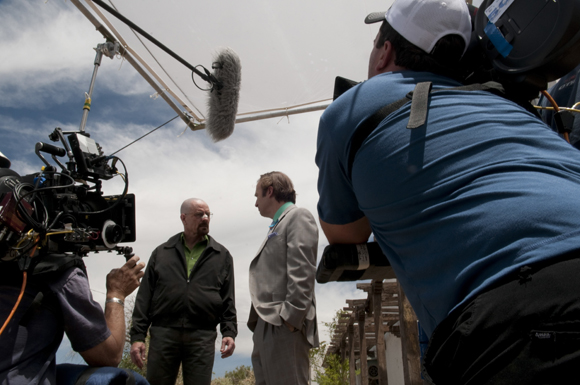 S&P: That’s a lot of mic’ing. Which ones are your go to pieces?
Frank: I like the Sanken CS-3e a lot. I love the sound of that mic. It may not reach as far as some of the other mics out there, but I love the high end on it. It’s just so sharp. I’ve been using Sanken for a long time now. Same with their lavs. The Sanken COS-11Ds are my go to wires, and we’ll use the CUB-01 for plants.

My boom operator, Jeff Knudsen, did suggest we look into the Sennheiser MKH 50 for some of our closer coverage, and after listening to it, it rocked. I ended up getting four of them for the show.

S&P: No CMIT-5U, huh?
Frank: Naw, that microphone doesn’t last out here. You’d be buying one every few weeks. A lot of people who come out here find that out pretty quickly. There’s just too much sand.

S&P: Besides Jeff, who else is on your crew with you?
Frank: Coming on near the end of season three, I ended up keeping the guys who were on it already. Besides Jeff, Steven Willer, is our other boom operator and utility. I couldn’t do any of the work without them.

S&P: Do you guys try to jump in for rehearsals?
Frank: It’s kind of a mixed bag. We work at so many locations; it’s hard to put people in the room. I prefer both of my boom ops in there, but if we can’t we manage to get by. For such a serious show, rehearsals are hilarious. Cranston is such a comedic genius. He’ll come up to you and say the craziest things. And you’ll just laugh, saying to yourself, I can’t believe he just said that. I feel pretty lucky to be on this show. 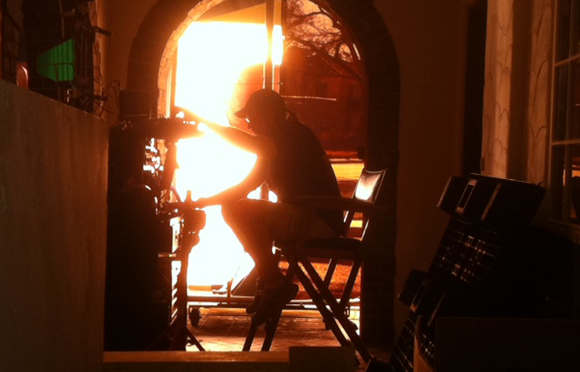 Darryl in a mix of Breaking Bad

S&P: How does your setup allow you to mix your tracks?
Frank: Since we shoot on film, I’ll do a Telecine mix and everything else is on ISOs. I’m mostly on the cart, but my setup allows me to jump into a bag pretty quickly when we need to.

S&P: How closely do you work with post from season to season?
Frank: You know it’s hard. They are in Los Angeles and I’m out here. For a long time, I was just a voice over the phone. One day, I got a phone call from the producers and they wanted me to fly out to LA. I was like, am I getting fired? That wasn’t the case, but they just wanted me to sit down and answer some questions. Our DP, Michael Slovis, told me this will be the best thing for your job. I really didn’t get it at the time, but after, I did. I was a person now. I was a face to them. Sitting down, talking over lunch. We were all on the same page — I would recommend it to anyone.

S&P: Do the meth lab costumes give you any issues?
Frank: Funny you should bring that up. We had a big discussion in a meeting about what they were going to be made of. Rubber was too hot for the actors. They were talking about the reflective properties. Everyone was giving their input on how they were going to look in regards to camera. Then all of a sudden, Vince looks up at me and says, oh my god, we need to have a side bar about this another time. No one was thinking about how the suits were going to sound. In the end, they found a material that was cloth-like. It looked near exact to the material you see on hazmat suits with very little sound issue.

S&P: Has the show’s sound adapted since you’ve been working on it?
Frank: Season 5 is the first year they wanted to put music in the show and add more background noise. I guess our show was too different from other shows and viewers started commenting. They kept saying the show was missing something. We’re so used to hearing the “dun, dun, dun” or musical elements underneath. When we took it out, I guess it was too much for the viewer. Personally, I liked the reality of it.

S&P: At the end of Face Off, Gus ends up getting his face blown off — what a fantastic scene.
Frank: Yes. You have Mark Margolis in this wheelchair. He hasn’t said anything for multiple episodes and only communicates by ringing a bell. The guy is able to say so much with just his facial expressions — he’s a true talent. When we started shooting that scene, no one was allowed to see the makeup of Giancarlo Esposito’s character Gus, and when he walked out during the first take, everyone in the crew reacted. I was like guys, we can’t do that, we are not in the scene. It just looked so incredible. Thought it was an effects shot, the practical was just so amazing. Makeup did an amazing job, and later, the special effects team did an incredible job enhancing that sequence.

S&P: How is it working on the set of Breaking Bad?
Frank: We have so many great people working together: our producers, directors, DPs, hair, makeup, all the grips and location people. Everyone helps each other out, which makes it a wonderful show to work on.

S&P: What are you still improving on as a sound mixer?
Frank: I’m always trying to get better — to make things sound better. It’s hard as a sound guy ‘cause things don’t always sound so good. You can get frustrated with mic ruffle or other location issues, but you have to get past it emotionally. I guess, knowing what’s going to be fine or what’s going to be the problem is the hardest. We don’t know what can be fixed till it hits post, so we have to be on our game every day.

S&P would like to thank Darryl for taking to us behind the scenes of his Breaking Bad mix. The Creative Arts Emmys will be held September 15th, 2012, at the Nokia Theatre LA LIVE in Los Angeles.