BOSTON, JUNE 26, 2013—When he finds something he loves, Boston-based freelance cinematographer and director of photography Albert Ayzenberg shares it with as many people as he can, especially when it comes to his preferred tools of the trade. Ayzenberg has been a fan and avid user of batteries from Anton/Bauer®, part of Vitec Videocom, a Vitec Group company and a premier global provider of batteries, chargers, lighting and other mobile power systems for the professional broadcast, video, film and healthcare technology industries, for years, and often posts photos of productions where he used Anton/Bauer batteries on various social media sites and his blog. Whether he is shooting a wedding, store opening or other type of video, he always makes Anton/Bauer DIONIC® 90 batteries and Gold Mount® solutions a part of his rig.

“Anton/Bauer’s DIONIC 90s are the only batteries I use,” says Ayzenberg. “I’ve been using them for nearly nine years. Whether a job is taking place in a studio or on location, the batteries last forever. I typically use a RED EPIC, ARRI Alexa, Canon EOS C300 or 5D Mark II DSLR cameras, and, depending on the model, the DIONIC 90s provide a full load of several hours.”

Ayzenberg, who first learned about Anton/Bauer in a high school video production class, today utilizes the batteries in film projects for corporate clients. For software company PTC, for example, he is typically charged with shooting such marketing collateral as customer testimonials, executive interviews and product demos. While he uses the company’s in-house studio and camera, Ayzenberg always brings in his own Anton/Bauer batteries to ensure he has the power he needs to get the job done efficiently. 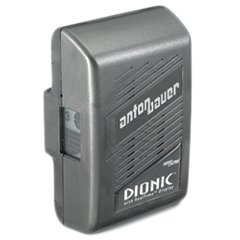 The DIONIC 90 was designed by Anton/Bauer to deliver consistently reliable performance even in the most challenging shooting environments. The 95Wh battery can handle a maximum load of six amps, and offers run-times ranging from six hours at 15 watts to 1.75 hours at 50 watts. The DIONIC 90 features an enhanced RealTime® display that indicates both fuel gauge and remaining run-time data simultaneously. The display incorporates readouts of hours, minutes and remaining capacity, making battery change decisions quick and easy. What’s more, its motion-detection feature, now standard on all Logic Series batteries, incorporates a sleep-mode setting that reduces battery self-discharge, allowing for extended periods of storage with minimal capacity loss. The battery can be “awakened” by the built-in motion sensor. These patented features offer confidence for the camera operator.

“When I have my Anton/Bauer batteries, I know that no matter what I’m walking into, I’ll be set,” says Ayzenberg. “Whether you’re using a tripod, mini-pod or anything else you might find in-house somewhere, you’re good to go. Plus, the fact that my power rig is wireless is especially important when working at a client’s studio. It gives me the flexibility to maneuver around the studio, which may be cluttered with wires from other types of equipment or cables from the lighting setup. There are so many things that you could trip over, so it’s a help to be mobile.”

Ayzenberg often uses his Anton/Bauer gear to power the 1×1 Bi-Focus Spot/SuperSpot 5600K LED Light (AC/DC) from Litepanels (a sister Vitec Videocom brand), which he typically includes in his rig. This ensures even more mobility, enabling him to quickly and easily pick up his lighting kit as he moves to the next location.

“I completed a large corporate client shoot recently, where I filmed several of the company’s customers in three different studios,” recalls Ayzenberg. “I had to run up and down to bring customers to the different studios; it was just crazy. I was so happy to have had my Anton/Bauer batteries with me. I could just go anywhere at any time during the daylong production, I was always powered up and ready to go. The production was flawless and my rig saved me a lot of time and energy.”

In addition to his corporate work, Ayzenberg also relied on his trusted Anton/Bauer gear when he captured what he considers to be his most important project, filming the birth of his daughter. “The greatest production that I’ll ever do was my daughter’s birth,” he explains. “I shot that with a Canon 5D Mark II DSLR and used two Anton/Bauer DIONIC 90s with a QR-DSLR Gold Mount. Together, they powered the entire labor, which took nearly 11 hours. The Gold Mount easily attaches the DIONIC 90 to the camera, which is a critical step in making the whole system work together to extend the battery life. On-board camera batteries often die out too quickly, so having this reliable power solution on-hand was just priceless.”

About Anton/Bauer
Anton/Bauer is recognized as the world’s innovator and a premier provider of batteries, chargers, lighting and other key mobile power systems for the professional broadcast, video and film and healthcare technology industries.  Based in the United States in Shelton, CT with offices in Europe and Asia, Anton/Bauer was established in 1970 and has expanded its product offerings to include many signature lines such as its leading Gold Spectrum™ Series, Gold Mount® system, InterActive® chargers and Logic Series® batteries such as the HyTRON® 50, 100 and 140, and DIONIC® 90, HD, HC and HCX. Their products are compatible with every camera brand on the market today.  Other Anton/Bauer high performance products include the Ultralight® 2, ElipZ®, CINE VCLX and the Tandem 150 Modular Charging System. Their superior-quality products have become an industry standard. For more information on Anton/Bauer, visit www.antonbauer.com.

About Vitec Videocom
Vitec Videocom brings together some of the most respected, most innovative and most sought-after brands in the industry: Anton/Bauer, Autoscript, Camera Corps, Litepanels, OConnor, Petrol Bags, Sachtler, Vinten and Vinten Radamec. It acts as an endorsing brand for these market-leading broadcast, film and pro video products, encouraging multi-brand system sales and simplifying the way that customers worldwide do business.

Vitec Videocom is an operating division within the Vitec Group, an international business serving customers in the broadcast, photographic and military aerospace and government markets. Vitec is based on strong, well known, premium brands on which its customers rely on worldwide.

Vitec Videocom – advancing the quality and science of media production.