When Jeff Touzeau of Hummingbird Media emailed me late August with a subject that read “Wireless opera at L.A.’s iconic Union Station,” I didn’t think much of it. When he circled back a few days later wondering what my thoughts were… I began to take notice. I mean, most operas use wireless nowadays so what was this “huge deal” he was mentioning? I reversed, read it and realized what this stoic moment was about: Audio specialist Sennheiser was helping to create LA’s first opera where the audience would be able to wander around freely listening on wireless headphones. Experimental? Yes. But so was Ben Franklin and look where that got him? History books. Meh. Who wants that?

Coined as a “headphone opera,” artistic director Yuval Sharon took on Invisible Cities to pave this historic moment for his company, The Industry. Just their sophomore production, Yuval mentions the real credit for the idea belongs to sound designer Martin Giminez. “Martin came to me and said ‘what if we did an opera with headphones’… I liked it, but I wanted something bigger. More grandiose,” says Sharon. It wasn’t until Invisible Cities came along and grounded it to the architecture inside Union Station that it made sense. When Sennheiser stepped in to assist from a technical standpoint, they knew they had something. 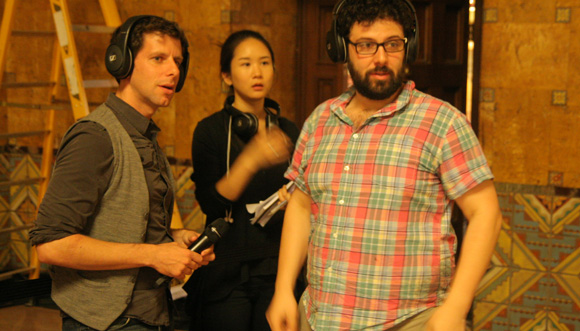 Invisible Cities is adapted from the novel by Italo Calvino of the same name and its music and libretto are by Christopher Cerrone. The story illustrates a young Marco Polo entertaining Kublai Khan with descriptions from cities the Italian visited on his journeys through Khan’s empire. Both fictitious and imagined from the mind of Polo, the two did not share the same language making the depiction of Polo’s city imagery open to the individual.

Now open until November 8th, the 75 minute production provides entertainment in any direction you want it to come.  Invited to an early dress rehearsal, I was given a pair of Sennheiser RS 120 wireless headphones and shuffled into a room with another 100 or so on-lookers, where conductor Mark Lowenstein and his eleven piece orchestra sat waiting. I could see the excited tension etched on their faces as they warmed their strings.

A few moments later, Yuval stepped in, grabbed a microphone, and spoke. His animated tones filled my headphones with crystal clear audio and told us there was no wrong way to experience this opera. To enjoy it as you saw fit. After ten minutes of orchestra, the doors opened behind us and we were free to roam. Free to sit and watch the musicians turn their pages of music. Free to sit at the bar and buy drinks. Free to take off the headphones just to enjoy the dancers’ performances. Free to walk among everyone else. Endless possibilities. Endless experiences. 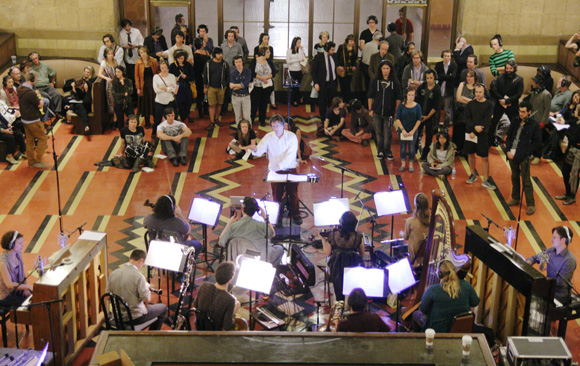 I decided to park at a bench just outside the orchestra and marveled at the technology behind this moment as it whispered into my ears. I could see the flute was mic’d with a Neumann KM 184. So was the harp, the clarinet and the violin. The piano was tuned to a Neumann U 87. A Sennheiser e 914s for the horn and 908s on some of the percussion and harmonics. Down near the main hall of Union Station, I could see a massive antenna system. Passive A2003-UHF directional antennas were paired with A5000-CP UHF antennas – four to the group.

I sat and watched. Watched as the mass of people turned their heads to follow the performance. Watched as they shuffled their feet through the long corridor around the corner. Coming towards me was a girl flying a plane in hand, holding a briefcase. She stopped beside me and shared my bench. It was Maria Elena Altany – the opera’s soprano. She sang. Right there. Right next to me as if I wasn’t there at all. As if I was part of her show at that moment.  She looked at me, turned and walked away.  I thought, what else was I missing? I stood and followed.

I later learned all the singers feathered their voices through Sennheiser MKE 1 lavaliers with SK 9000 bodypack transmitters and EM 9046 multi-channel receivers. The backbone of the entire production was on Sennheiser’s Digital 9000 series – 8 channels were used in parallel.

David Missall from Sennheiser along with Andrew McHaddad and Rod Allen at Bexel played an intricate role in the design and support to help map the frequency enigma. “For Invisible Cities, Bexel implemented a system using a variety of components based on our MAS-500 series of modular RF terminal products which allowed the Sennheiser-provided transmitters and receivers to work seamlessly throughout the performance space,” says McHaddad. 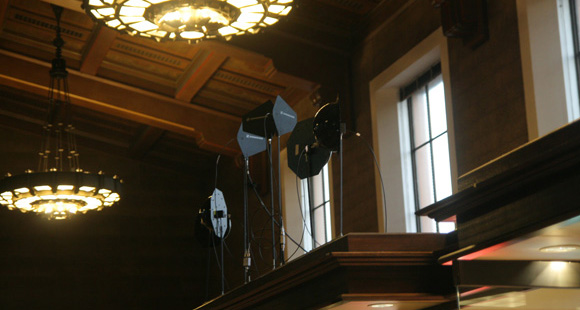 The antenna system atop convenience store

In all, four antenna systems were placed inside Union Station, utilizing seventeen A2003-UHF and A5000-CP antennas – one on top of the convenience store in the Main Hall, another outside the South Garden, one near the main entrance across Traxx Bar and another in the North Courtyard.

Since the performance was in a public place, safety was always a concern, so cables were run underneath Union Station and back to the Bagel Shop that acted as the control room during production. “The use of ultra low-loss cables was impractical due to the public space issues. We had to get creative with amplification and signal routing to deliver the maximum allowable energy to each transmitting antenna and provide the cleanest signal for the wireless microphone receivers,” adds McHaddad. 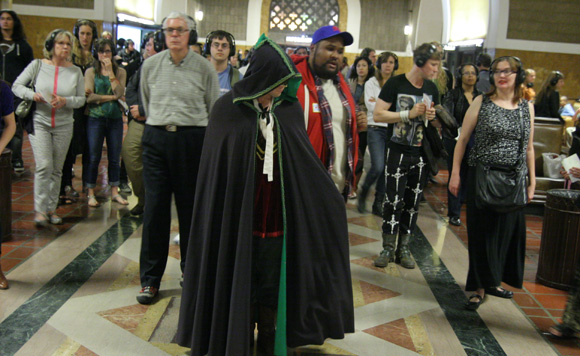 After an initial RF scan with the 9000 series, they learned they could turn down the RF to negate any unusual interference, but in doing so, they needed to add a few more antennas to make up for the loss. What may be even more surprising is after each night’s show, the crew will tear down and set everything back up again for the following show.

When I reached the Main Hall of Union Station, I shadowed a man in a green cloak walking towards the South Courtyard. Outside, water nymphs inhabited the garden, contorting, dancing and singing the city imagery of Polo’s Armilla. I turned off my headphones and watched their rhythmic nature as the unbeknownst walked by with opened, wondering eyes.

Both the singers and dancers were equipped with a Sennheiser 2000 series in-ear-monitoring system. EK 2000 IEMs and SR 2050 twin transmitters were matched with IE 4 earphones. 18 different receivers were put into play during each performance. 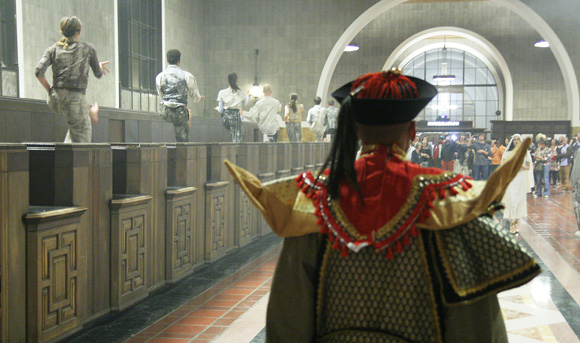 As the story came to a close and the city of Adelma spawned the undead, we were transfixed, watching Kublai Khan and Marco Polo take leave of one another in the large lobby of Union Station. I stood next to Ashley Faatoalia, who played Marco Polo, no more than an arm’s reach away. I watched as he softly bellowed his lines into my headphones. I took them off to hear the raw talent of his voice. I turned to watch the choreography Danielle Agami created for the undead dancers in front of us. There were no rules. No wrong way. Just an experience that I undoubtedly won’t forget.

You can find out more information about Invisible Cities by visiting: invisiblecitiesopera.com