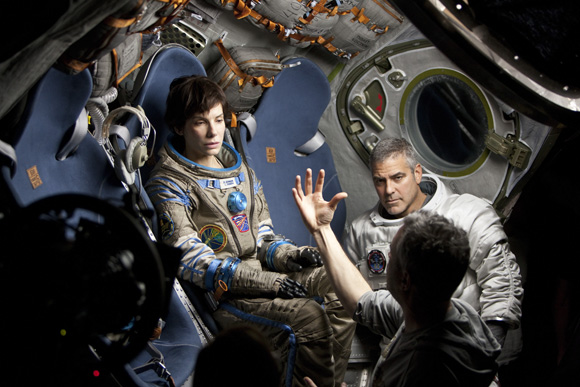 “We wanted to do something different that pushed boundaries,” explains Glenn Freemantle, the sound designer for Gravity. “Director Alfonso Cuarón wanted to make the kind of film with the biggest picture and the best sound – a true cinema experience you can watch over and over again.” Different? Check. Pushed boundaries? Check. Something I would watch again nearly immediately? Check.

From the film’s opening sound treatment that’s layered over the Warner Bros. logo, to its final fade, moviegoers are inundated with innovative sound design and imaginative visuals. “Gravity is a huge emotional journey. That’s how Alfonso imagined it, and we were lucky enough to have the support from the studio and producers,” notes Freemantle.

Glenn was tapped in December 2010 when he was asked to design sound for a 45-minute pre-visualization that would be screened to Warner Bros. “It was before anything. Before they shot any Sandra or George, Alfonso wanted to design a sequence to show the studio,” says Freemantle. It was here Glenn created a 5.1 mix with Cuarón that helped establish the film’s sound design rules and principles. “In our very first meeting, we came out of it with the concept to create sounds through touch and vibrations. At the heart of it, Gravity is a survival story, and the sound had to be as big as what you’re seeing on screen. We wanted to portray it emotionally instead of action-packed. It was a great idea, but I thought to myself; ‘How are we going to do it?,’” admits Freemantle.

Creating sound for a 7.1 mix was always the initial concept for Glenn and his team, which consisted of Skip Lievsay, Niv Adiri, Nina Hartstone and others, but it was up until the advancement of the new Dolby Atmos technology that pushed the film to a new level. “I was under an NDA at the time, and I reached out to Dolby and I told them I have the perfect film for this medium,” says Freemantle. “With 7.1 you can constantly move, but only through the dimensions you have. In Atmos, you can mix smoothly while you move and a viewer can become even more a part of it. When Sandra turns her head from left to right, so did the sound. When the whitepaper came out on Atmos, Cuarón was all for taking the step further to accomplish something great.”

Designing the elements for screen became a journey in itself. “We wanted it to be a powerful part of the film that you could immerse yourself in. Whenever Sandra was touching something or banging into an object, we wanted the viewer to feel it. When she stopped touching something or stopped using a tool, we dropped the sound and you don’t hear it,” explains Freemantle. Foley became an integral part of the process. With the help from Nicolas Becker, he and Glenn recorded some interesting sounds. One being a submerged acoustic guitar that they rubbed various items along the strings. They recorded the sounds with hydrophone and contact mics and manipulated them in post. Some of the recordings were used during the scene where Sandra is entangled with a parachute.

For the background radio chatter, Glenn turned to people who worked for NASA. “Our company was able to get a group of NASA guys together in Florida. Through Skype, we mic’d each one and walked them through scenarios without giving away any of the plot. We recorded about four hours of space talk and chatter and that became part of the track,” says Freemantle.

Other powerful parts to the design were Sandra’s breath and her heartbeat. “From the very start of the film, we wanted you to feel like you were going on a journey with her. The sound has tons of layers and everything we created aimed to be original. We wanted you to become attached to her right from the beginning. I remember watching one of the very first viewings and I saw people moving in their seat and holding their breath – I knew we made something great,” says Freemantle.

The production sound recordings were handled by Chris Munro and boom operator Steve Finn. “I’m sure Chris had many set challenges,” mentions Freemantle. “He was able to see the 45-minute concept video, so he knew what we were going for, but there was a lot going on. Sandra and George were in these boxes for most of the filming and there were these massive robots and things making noise. He was able to get great quality dialogue for us by micing inside the helmets and with an overhead microphone. Because most of the visual effects were done, they would have to trigger dialogue lines so  the visual effects would match perfectly. His team did a really good job.”

Score from Steven Price played to the emotion with unique tones as well. “Alfonso and Steve worked together relentlessly to come up with ideas,” says Freemantle. “Those two were brilliant and conceptualized towards creating an amazing cinema experience. Steve would record an instrument and treat them in a way that wasn’t recognizable. When sound wasn’t used traditionally, like an explosion, he would let the music become more like a ballet.” The score received the same type of panning as the dialogue and sound effects so everything moved together.

“We also used the score to help focus on things we weren’t describing with sound design. Even underneath the design and score, we had a subsonic layer of sound so the screen had a presence. The screen has to have weight. The picture has to have something to attach to. You don’t necessarily hear it but you feel it in your stomach. It’s like if you went to a desert or a massive empty stadium, it’s quiet, but you still feel something,” adds Freemantle.

In their final mix, for Glenn, it was the sum of all parts created. “We were a team. And this team was great. Everything was made for the good of the film instead of one single person trying to be great. We all worked together to create the best immersive sound experience we could. It was a true collaboration from start to finish.”

Besides receiving an Oscar nom for Sound Editing and Sound Mixing, Gravity has been nominated in eight other categories.