350 ACTION is a dot-org with a unique take on global warming awareness. These activists argue that we shouldn’t be naming destructive weather events after random names, but after policy makers who “deny climate change and obstruct climate policy.”

It’s a fantastic idea to say the least. Hurricane Katrina claimed 1,836 people nine years ago in August, and Hurricane Sandy resulted in over two hundred lives lost in 2012. Why place that melancholy association on the people of the world who happen to be named Katrina or Sandy? Enter Hurricane John Boehner.

The movement has already collected the necessary 50,000 signatures (113,313 to date) to send to the World Meteorological Organization, the institution that names storms, for consideration. Will they change it? Probably not. But in a clever video developed by the ad agency, Barton F. Graf 9000, has no doubt propelled awareness about who’s making an already major problem worse.

Directed by Ted Pauley, Climate Name Change has over three million views and recently took home a Cannes Gold Lion award. We sat down with the spot’s cinematographer Kris Kachikis to see how it came together.

How did you get tapped to be involved in the project?
Kachikis: I have a longstanding relationship with director Ted Pauley. So when he needed something pro bono for a good cause, he knew where to come. I was happy to help him.

What was your reaction to its narrative?
Kachikis: I love doing projects that are political in nature and send a message that make people think about who they are and how their actions affect the world at large. This was targeted at political leaders, but I love being a part of projects that make all of us think about what we do, how we treat each other, and how we treat our planet.

In prep, did you look to any references to visually shape the story?
Kachikis: Ted and I actually spoke about this TODAY! While the effect of the spot is comedic, the thrust of the images and dialogue is completely straight. I think the message comes across so strongly because we were really hoping to create straight news footage, pure and simple.

What did you look to for camera and glass?
Kachikis: We went straight to the CNN tool kit and used the cameras and lenses that are used on national news coverage.

What type of personality did you want in your lens choices?
Kachikis: We were looking for that honest, immediate, live news feeling. This dictated our choice to shoot at 30 fps as well.

How many days did the team get to finish the production?
Kachikis: We shot the project for two days (not including the shot of my daughter as “Katrina” on the swing, or the producer’s son as “Andrew” in the pool). Over the production we shot on locations, news studios, and in front of indoor and outdoor green screens. It was a very full two days. 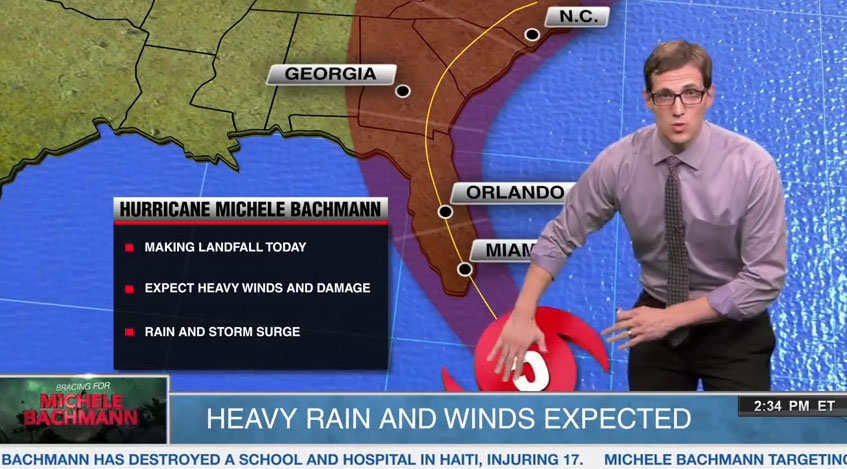 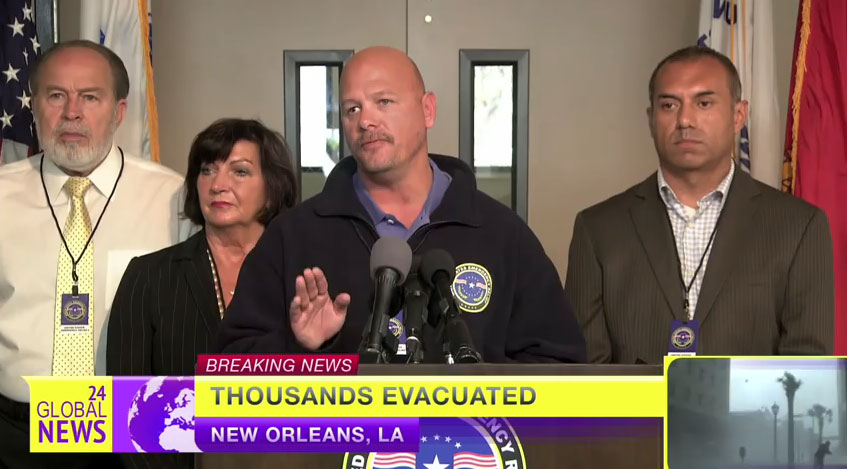 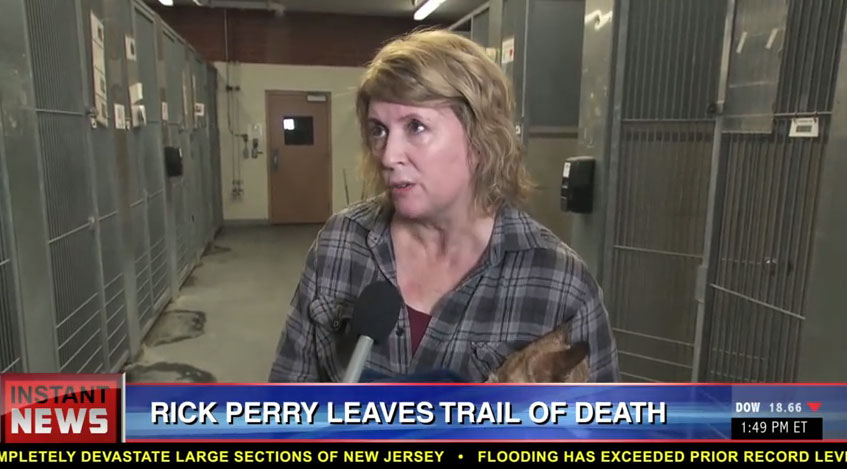 The story is intertwined with news pieces and footage. How did you approach shooting these short sequences?
Kachikis: We needed to match the existing footage that had been preselected by the ad agency creatives and Ted. That footage often dictated our lighting direction, camera angle, and even fan direction.

How did you light the newsroom sets?
Kachikis: Many of the news studios were already lit. In most cases, I brought in my own key lights for the news people “underneath” the existing lighting. Usually, I left the backgrounds as they were.

One of my favorite moments is the Rick Perry Dog Shelter interview. Did you have to bring in any additional lights for that sequence?
Kachikis: We went with the existing overhead skylight at the animal shelter because it was perfectly dingy and depressing. We then used a handheld 1×1 LED panel to get light in the eyes of the actress and give the scene a bit of tension.

Besides being the cinematographer, my guess is that you also worked the camera. Is that true?
Kachikis: Yes, I was also the operator. My AC John Pingry was also an operator.

Did you have a gaffer to help out?
Kachikis: My gaffer is Alex Skvorzov. He is an amazing part of my core team, which includes key grip Brady McElroy and AC John Pingry. Alex and I have worked for more than 10 years together. We met doing commercials when my then gaffer started shooting. We’ve been together over nine years now. I love it!

You have a stellar commercial DP reel. Anything else on the horizon?
Kachikis: Films will definitely be in my future. Working on commercials gives me great time with my children while they are young. When they grow up and leave the house, that will probably be my time to do more features.

As someone rooted in the photography world, are there any directors or storytellers you wouldn’t mind working with?
Kachikis: Alfonso Cuaron, Peter Lindberg (photographer), Krzysztof Kieslowski (dead), Julian Schnabel…
Next week I’m working with Christopher Guest, which is totally awesome!

What inspires you creatively?
Kachikis: My wife and children’s curiosity, creativity and drive inspire me in life – and in my craft. I hope I can one day be as creative as them.

Star Wars or Star Trek?
Kachikis: Because of my generation I have to say Star Wars, but the NEW Star Trek is pretty awesome.
Light meter or DIT?
Kachikis: If light meter means I’m shooting film then light meter! But then I would also need to have my right hand man and DIT Casey Sherrier with me as well. That’s a tough one!
Books or magazines?
Kachikis: Books seem more permanent.
Beatles or Rolling Stones?
Kachikis: Beatles on vinyl.
An extra day of shooting or an extra set of lenses?
Kachikis: I always carry an extra set of lenses (usually my Kowas) so I’ll take the extra day of shooting. (I guess that means I get both!)

Get updates from Kris at kachikis.com. Or Climate Name Change at climatenamechange.org