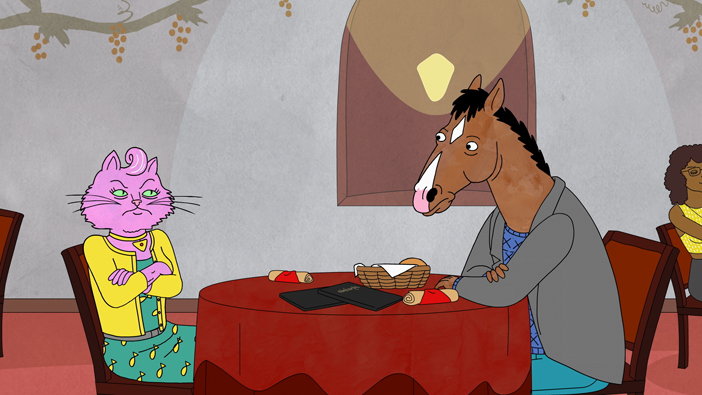 Go ahead and cancel your plans on August 22nd. Do it. Why? Because you’ll be binge-watching BoJack Horseman on Netflix. This animated comedy series has an adults only vibe (sorry, kids) that gleefully flings us into a snarky, pseudo-Los Angeles world where animal-people and humans live side by side. With punches of dark humor, the trailer is bursting with funny, and looks to be as promising as Archer and Bob’s Burgers.

Created by Raphael Bob-Waksberg (The Exquisite Corpse Project), the narrative chronicles the mishaps of BoJack, a disillusioned horse whose acting career peaked in the ’90s on everyone’s favorite family sitcom, Horsin’ Around. Twenty years later, he’s a washed-up has-been nursing his wounded career and love life with whisky and delusions. BoJack, voiced by the talents of Will Arnett, says it best: “Everyone is just out to get me because I’m famous and so well-adjusted.”

Love it. Love everything about it.

This refreshingly irreverent midnight snack of a show was brought to life by graphic artist Lisa Hanawalt and animated by ShadowMachine. You can watch all twelve episodes at 12:01am PT.