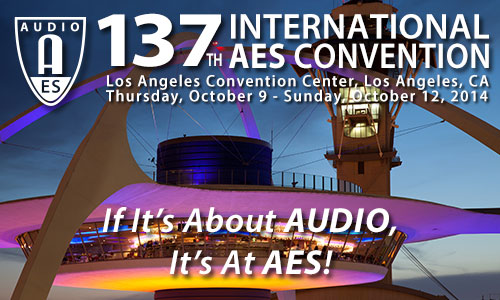 New York, NY — The ways in which both broadcast and streaming audio platforms are evolving and converging will be on display at this year Broadcast and Streaming Track during the 137th Audio Engineering Society Convention, set for Thursday, October 9, through Sunday, October 12, 2014, at the Los Angeles Convention Center in Los Angeles, California. Broadcast and Streaming Track Chairman David Bialik has identified key trends in these spheres and assembled a series of cutting-edge panels that will explore and discuss these topics.

These panels and presentations will go into considerable depth under the guidance of thought leaders in their categories. For instance, the Loudness for Streaming and Radio panel will look at key questions, such as “Is the ‘loudness war’ in radio over?” “Has it moved over to Internet streaming?” “How can we control level without disrupting the audience?” These will be examined by a panel consisting of John Kean, NPR Labs; Thomas Lund, TC Electronics; Robert Orban, Orban; Frank Foti, Telos Alliance; Tom Box, DTS; and Scott Norcross, Dolby.

Attendees at the Broadcast and Streaming Track sessions will also experience a rare treat: a look at facility design through the eyes of two audio legends. Eddie Kramer, acclaimed engineer/producer for such legendary acts as Jimi Hendrix, Led Zeppelin and Kiss; and the Walters-Storyk Design Group’s John Storyk, designer of Hendrix’s Electric Lady Studios as well as hundreds of other iconic recording and broadcast facilities, will both be there to discuss how two leading FM music stations, KEPX in Seattle and KPFK in Los Angeles, are managing substantial changes. KEPX is preparing to move to a new broadcast facility that will feature cutting-edge broadcast/recording studios and a live performance venue designed to showcase visiting artists, while KPFK, one of the most powerful stations in the U.S. at 110,000 watts, will undertake a major acoustical update of their live performance studio and create a new control room. That both stations will operate professional‐level recording studio/performance venues underscores radio’s continued importance for music, and the presence of Kramer and Storyk to share their expertise will provide a unique perspective for attendees.

Commenting on the Broadcast and Streaming program at the AES137 Convention, David Bialik states, “The AES Tracks, Sessions and Workshops are about learning ‘Technology and Technique,’ while the sales presentations stay on the exhibition floor. I believe this is the reason that the attendance for the ‘Broadcast and Streaming’ sessions only increases year after year.”

For information on how you can get your FREE Exhibits-Plus badge (pre-registration required) and detailed information on the Broadcast and Streaming Track at the AES137 Convention, as well as further Registration, Hotel, and Technical Program information, visit the AES137 webpage at http://www.aes.org/events/137/.

About the Audio Engineering Society
The Audio Engineering Society was formed in 1948 and now counts over 14,000 members throughout the U.S., Latin America, Europe, Japan and the Far East. The organization serves as the pivotal force in the exchange and dissemination of technical information for the industry. Currently, its members are affiliated with more than 75 AES professional sections and more than 95 AES student sections around the world. Section activities may include guest speakers, technical tours, demonstrations and social functions. Through local AES section events, members experience valuable opportunities for professional networking and personal growth. For additional information visit http://www.aes.org.