Montreal, Québec — Rodeo FX was rewarded with a prestigious Emmy Award for its contribution to the visual effects on Game of Thrones. Acting as one of the main VFX vendors on the series, the Montreal-based company created a total of 150 visual effects shots for the 4th season of HBO’s most popular show of all time.

A team of more than a hundred artists, project managers and technicians worked for six months on the impressive visual effects that earned Rodeo FX the statuette, which recognizes excellence in the television industry, an equivalent to the Academy Awards for film. The Creative Arts Emmy Awards ceremony was held at Nokia Theatre in L.A. last week.

“This award confirms that Montreal is one of the top players in the visual effects industry,” said Sébastien Moreau, President of Rodeo FX and Executive VFX Supervisor on the show. According to Moreau, the strategic and economic measures that were put in place in the province of Québec over the past few years explain today’s success on the world stage. “The tax credits offered by the government represent a great incentive for producers to bring work here,” Moreau explained. “We also have specialized schools where students acquire a very thorough knowledge of visual effects. Some of our most talented and experienced artists come from Centre NAD and Cégep de Jonquière; these schools have developed a curriculum that really responds to the industry’s needs.”

Leading Rodeo’s team on Game of Thrones, VFX Supervisor Matthew Rouleau is the one who got his name engraved on the precious trophy. He has nothing but praise for his colleagues who, once again, pushed the limits of their art. “There was such a contagious desire to perform and deliver beyond-stunning visual effects,” Rouleau said. “The artists really put all their talent and their heart into the work. This is why we now have this amazing statuette decorating our office!”

Rodeo FX also recognized the exceptional work of HBO’s VFX Supervisor Joe Bauer and VFX Producer Steve Kullback, whose contributions resulted in a third Emmy Award in a row for the visual effects of Game of Thrones. 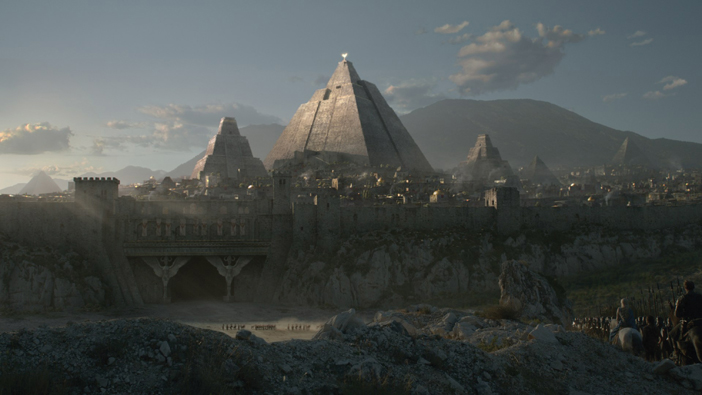 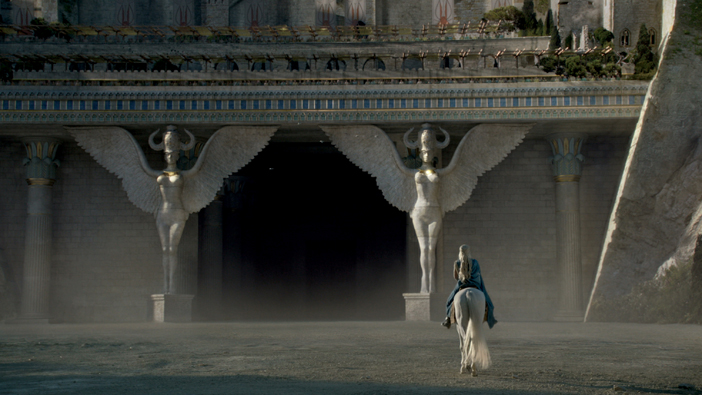 Meereen, the virtual city
Rodeo FX’s contribution to the 4th season of Game of Thrones was considerable and spectacular. In addition to creating the city of Meereen, the largest and greatest of the three great city-states of Slaver’s Bay, Rodeo FX was responsible for generating the massive CG army that attacks it; a memorable and striking scene. The Montreal studio also designed a series of grandiose CG environments, as well as creating a zombie-horse, modeling and animating a cavalry of thousands of horsemen, simulating atmospheric effects, contributing to numerous sequences of wolves and much more.

“Although there can only be one name on the trophy, this prize is the result of an incredible team effort and a lot of people deserve to have their name on the award,” Moreau said. “Matthew did an amazing job leading the team, and he was surrounded by a great squad: Producer Isabelle Langlois, Executive Producer Jordan Soles, Project Manager Annie Cliche and Compositing Supervisor Patrick David. These guys did an incredible job, and so did the entire Rodeo FX team.”

About Rodeo FX
Founded in 2006 by Sébastien Moreau, a former Industrial Light & Magic (ILM) artist, Rodeo FX has grown to more than 170 accomplished visual effects professionals. With its head office in Montreal’s Cité du Multimedia and a brand new studio in Quebec City, the company has contributed to more than 60 feature films, including three of this summer’s blockbusters: Lucy, Edge of Tomorrow and 22 Jump Street. Rodeo FX also created and produced visual effects for the unrivalled movies Pacific Rim, The Hunger Games: Catching Fire and Now You See Me, as well as for the celebrated TV series Game of Thrones, which dominated the 2014 Emmy Awards nominees with an impressive 19 bids. The year to come is also highly promising with a handful of major projects hitting the big screen. Alejandro González Iñárritu’s Birdman will open the Venice Film Festival and close the New York Film Festival, and Angelina Jolie’s highly anticipated Unbroken will hit theaters on December 25, among other projects currently in production. For more information on Rodeo FX, please visit www.rodeofx.com