American television has a long tradition of taking popular shows from other countries, tweaking them ever so slightly, and offering them as fresh entertainment. The problem with doing that in today’s globalized society is that we’re a lot closer to each other than ever before. Sharing information is easy, thanks to the Internet – anyone from anywhere can watch programming from practically any country within days of its original broadcast.

So, no matter how compelling a series might be, networks take risks producing adaptations of foreign shows, especially English language ones. Case in point – NBC’s 2003 adaption of BBC’s Coupling. It was dubbed the next Friends, but failed miserably. On the other side of that fence was The Office – hugely successful. This fall, Fox is taking a stab at it with the “new” show Gracepoint.

This adaptation is of the BBC hit, Broadchurch, which had everyone in Britain asking “Who killed Danny Latimer?” The victim this time is Danny Solano, a 12-year-old boy who’s found dead at the base of a cliff in the small, seaside town of Gracepoint, California. Heading up the case is Detective Emmett Carver, played by David Tennant, in a reprisal of his role from the BBC version, albeit with an American accent. His partner is Solano family friend, Detective Ellie Miller (Anna Gunn). As the narrative unfolds, the pair has to find a way to avoid a media circus and solve the murder in a small town where everyone knows everyone else, thus making everybody a suspect.

The most striking aspect of the pilot is the audio. The mix is sparse, involving very little music, which intensifies the sense of reality in the episode. You can hear the rustling of a jacket and the shifting on the couch as the Solanos are given the news about their son, dragging you aurally into their living room – it’s engaging, authentic.

When we do hear the music composed by Marty Beller (In Treatment), it’s usually added as a drone, peaking during the many slow motion shots in the show, acting almost like a glimpse inside each character’s mind. The audio layers also feature tracks that have just a slight twang of guitar to them. It reminds us of the soundscape made famous in Breaking Bad, but this style seems to work well for Gracepoint. It’s clear the show wants you to concentrate more on the story and characters than the use of pop songs at the end of each episode. 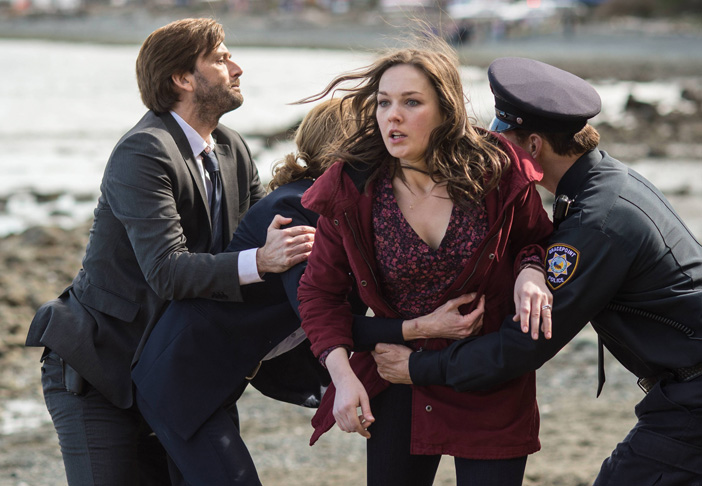 James Strong, who also directed Broadchurch, brings the same style that worked so well for the original to here in the States. Lensing the entire miniseries is DP John Grillo, where he and Strong two framed slow motion sequences to great effect in the pilot. The slow motion is often used to heighten tension in otherwise mundane moments of a scene, while at the same time conveying the emotions of the characters. Take the scene when Detectives Carver and Miller walk toward the Solano house mentally preparing themselves to deliver the news about Danny. Instead of a simple tracking walk and talk, Strong focuses on the detectives, slowing down their movements, allowing the audience to get inside their heads, and contemplate along with the detectives and the devastation that’s about to hit this family.

In a similar fashion, the slow motion allows the audience to have an opportunity to absorb the emotion of a scene. In the moment where Danny’s mother, Beth (Virginia Kull), has just realized that her missing son’s body was found at the beach, she takes off running through the stopped traffic. Strong slows down the sequence, allowing the viewers to fully appreciate Beth’s realization and desperation as she runs toward him.

But the pilot isn’t gratuitous with its slo-mo. Strong does a great job of drawing the viewer in without relying on it exclusively. In the scene when Ellie Miller is about to tell her son that Danny has died, her husband stops her just before she goes up the stairs. Strong intimately positions the camera on the stairs with the bannister in the foreground, giving the audience the point of view of following her, but it turns and looks back down the stairs to see what’s keeping her. The camera placement and use of handheld in the show really gives the audience a unique point of view, as if we were actually standing in the scene with the characters.

Bringing it all together was the skilled hand of editor David Ray. He kept an even pace throughout and found ways for the viewer to feel the raw emotions of the Solano family as they deal with their loss. The sequence in which the family is told the devastating news has all four family members sitting on the couch, and Ray holds on a group shot, never cutting as the grief rushes in, forcing audiences to confront the tragedy head on. This style of editing also serves another purpose. With any good mystery, the viewer is constantly questioning, “Who dunnit?” By holding certain shots just for an extra second or two, the viewer is given just enough to have that passing thought of “Maybe this person did it.” 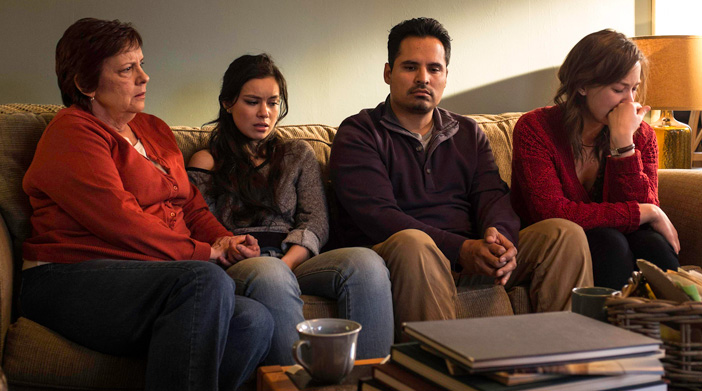 Even despite the rave reviews Gotham has received, Gracepoint is probably Fox’s best new show this season and may very well be the best new show of the fall. While Gracepoint is a taut, emotional mystery that uses an audio mix and striking visuals to enhance a story that’s overall gripping and engaging, we still like the original better.

Where Gracepoint fails ties to how closely it follows the blueprint set out by its source material, Broadchurch, which aired last summer. And, as copies sometimes tend to do, it falls short. As good as Anna Gunn is, Olivia Coleman was that much better as Ellie Miller. As good as David Tennant is, he’s even better when he’s not trying to hide his accent. Even the town itself seems too idyllic for America, yet it seems to work perfectly as a sleepy English seaside town. Everything feels just a little bit more natural in Broadchurch than in Gracepoint. You’d be better off finding the original version, but we still have to wait and see if the series is the next Office or just another Coupling.

Gracepoint is an attractive, emotional detective drama, but we still prefer the original, Broadchurch.