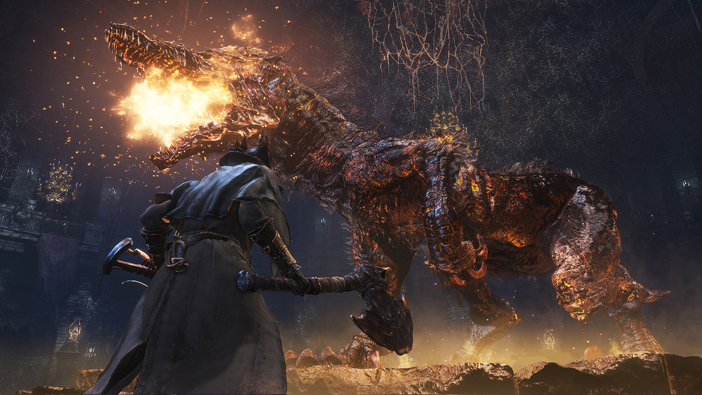 A smiling but wary Sony representative greeted newcomers to the Bloodborne booth, an upcoming title from developer From Software. “You know what this game is like, right?” she asked. “If you just mash buttons, you’re going to die.”

Director Hidetaka Miyazaki makes hard games, and apparently more than one PSX attendee slammed down their controller in frustration, muttering profanities as they left the booth. One player had to be kicked out after spending an hour in front of a demo station, dying again and again. “I felt bad,” the rep said, “but they just weren’t getting any better.”

Like Miyazaki’s previous titles, Demon’s Souls and Dark Souls, Bloodborne is a third-person action RPG with a moody horror vibe. Players choose from one of four heroes, who differ in terms of strength, speed, and weapon capabilities, and then roam the streets of Yharnam in search of… something. The demo didn’t reveal much story, instead focusing on the game’s brutal, methodical combat.

Similar to Dark Souls, players must anticipate enemy attacks, and only strike when it’s safe; failing to do so leads to a quick demise. Unlike its predecessors, Bloodborne doesn’t have a block button, but does give gamers a ranged option in the form of guns. The combat feels faster, and one-on-one fights are pretty easy. It starts getting hairy when enemies begin attacking in groups of three or more.

Visually, Bloodborne’s setting looks less like a place and more like a kind of Victorian nightmare, oozing shadows out of every pore. While players control the in-game camera, it doesn’t move as fast as one might expect, making attacks from behind particularly deadly. Yet somehow, instead of being frustrating, this actually makes the game more addictively tense; if players don’t pay perfect attention to their surroundings, or move forward recklessly, they’ll die.

Bloodborne comes out March 24, 2015, exclusively for the PlayStation 4. 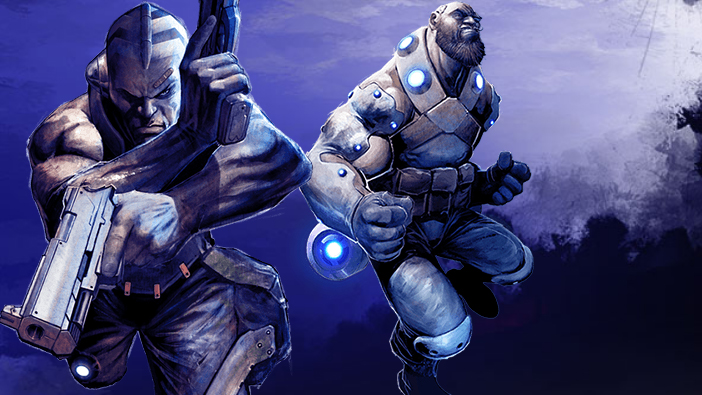 When Christian Phillips of Sony’s San Diego Studio announced Kill Strain during the PSX keynote, he didn’t offer much information. The game will be free-to-play, it’s scheduled for 2015, and the multiplayer-only gameplay is team based. There was no footage of the game in action, and other than a brief tease – “It’s a game where your enemies can quickly become your teammates” – Phillips didn’t discuss the mechanics, either.

There’s a good reason for that: the game is remarkably complicated. Not only was everyone in line at the Kill Strain booth given a handout describing the rules, but Sony representatives gave a ‘brief’ five-minute orientation to everyone hoping to play. Even with this education, most of the demo matches quickly devolved into chaos, with members of the development team even barking instructions to confused players.

All of this happened in spite of the fact that the game’s core concept is pretty simple: two teams of five humans shoot each other while trying to destroy one another’s base, while a third team of two super-strong mutants tries to “infect” the human players. Players that are successfully infected join the mutants’ side; as the game progresses the human’s numbers dwindle and the mutant team grows stronger.

All in all, it’s pretty fun, even though many players seemed lost. The human teams can gather resources and build giant mech-suits, while mutants can spread “the Strain” to increase their territory, but really the whole thing comes down to messy, button-mashing violence. The Kill Strain developers emphasized that the game is still in a pre-alpha state, which means they’ll have plenty of time to fix a number of issues with the current build. The visuals were particularly confusing, with so much happening on-screen at once that the action was hard to follow.

Sony San Diego is targeting the same hardcore audience that plays competitive online-only titles like League of Legends and Defense of the Ancients 2 (DotA 2), and Kill Strain’s proposed revenue model reflects this. The core game will be free, but additional characters and cosmetic enhancements will be purchasable. The exact prices have yet to be determined, but one developer expected them to be in line with the League of Legends pricing model.

Curious gamers can register for the PlayStation 4 beta now on killstrain.com. It’ll be interesting to watch the game’s progress. Kill Strain’s foundation is strong, but it remains to be seen if Sony San Diego can streamline the gameplay to the point where players feel compelled to leave League of Legends or DotA 2 for a new, unproven franchise. 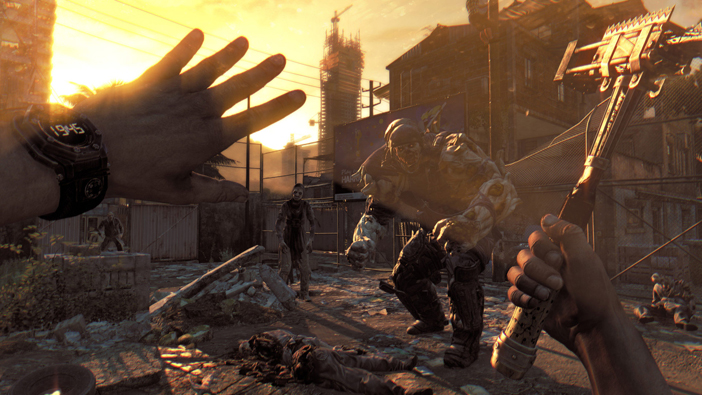 Face it. It’s almost 2015; zombies are over. Unfortunately, nobody told the developers at Techland, whose upcoming title Dying Light was on display at one of the smaller booths at PSX.

From the demo, it was hard to get a real read on Dying Light. The game’s being marketed as a survival title in which players gather supplies during the daytime and fight off undead hordes at night, yet the demo was a quick, action-heavy affair that gave players eight minutes to clear an area of undead menaces.

That means a lot of the game’s more interesting features – including a dynamic day-night cycle, the weapon-crafting systems, and the co-op multiplayer – weren’t available to try out. Instead, the demo focused on the Mirror’s Edge-style movement system and the first-person combat, with mixed results. The world itself is full of detail, and it’s easy to scale fences and jump between rooftops, but plotting a course using the mini-map is more difficult than it should have been, and it’s easy to get lost.

Fighting was a problem, too. First-person melee combat is traditionally pretty hard to pull off, and Dying Light doesn’t make any major improvements in that area. Weapons, including a spiked baseball bat and an axe attached to car battery, were creative if a little over-the-top, but didn’t help the combat feel any less clumsy. With practice, the system would probably get easier to handle, but during the demo it didn’t feel compelling enough to devote much time to.

And then, of course, there were the zombies. The creatures looked good and the gore effects – particularly the occasional blood splatter that hit the in-game camera lens – added a lot to the experience. Still, at this point, the whole undead thing is tired. Dying Light wasn’t bad exactly, but at a show filled with fresh, innovative games, it stood out mainly for its reluctance to do anything new or exciting.