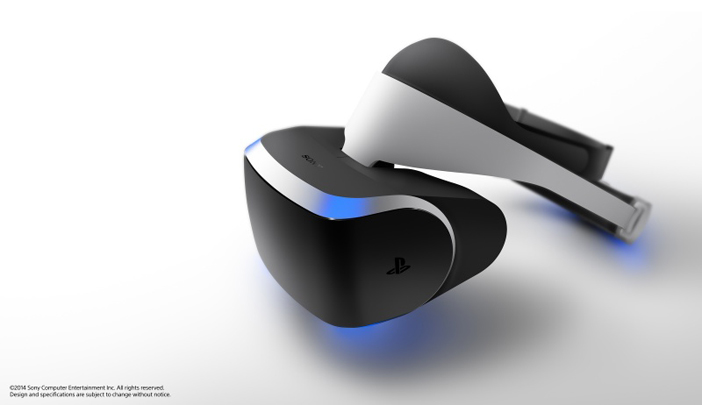 You’re standing in a castle courtyard, holding a sword. An armor-clad practice dummy stands in front of you, missing most of its limbs. Suddenly, something screeches overhead. You look up just as a 20-foot-tall dragon lands and swallows you whole. It’s almost impossible to keep from screaming.

With that, a Sony representative removes your headset. Suddenly, you’re back on a bustling convention center floor in the middle of Las Vegas, having just survived an experience with Project Morpheus, Sony’s new virtual reality (VR) headset. By combining the power of the PS4 with cutting-edge audio-visual technology, Sony’s Magic Lab hopes to create a home-based VR system that delivers compelling virtual experiences without breaking the bank.

And judging by the reaction at the PlayStation Experience (PSX) event, the team might be onto something. While developers and the press got their hands on the Morpheus unit at last year’s Game Developers Conference, PSX marks the first time that the headset was available to the public. Gamers’ enthusiasm for the VR system was immediate and palpable. Project Morpheus demos were tucked away in a special, ticket-only display. Waiting-list tickets disappeared after a couple of hours, but attendees trying to sneak their way inside constantly surrounded the booth anyway.

In addition to Castle, described above, another popular demo was Deep Dive, in which Project Morpheus users are submerged in a steel cage and are attacked by a great white shark. This title was also featured during the Project Morpheus panel at PSX, where Sony Worldwide Studios’ European director Dave Reynard shared a video of his mother trying the game for the first time. The poor woman was terrified, screaming while trying to push the virtual shark away. That’s the power of Project Morpheus: intellectually you might know that you’re wearing a headset, but emotionally you react as if you’re really there. 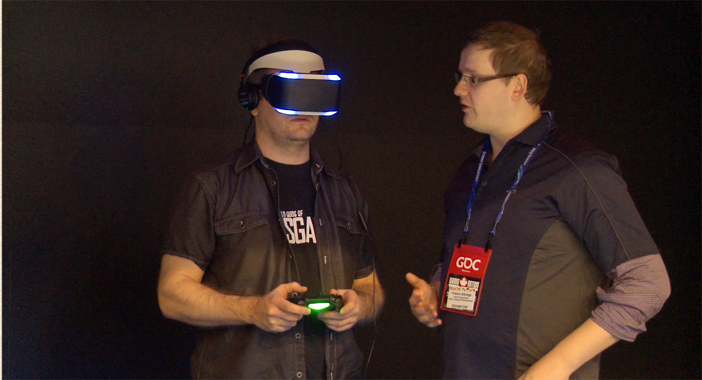 Castle and Deep Dive were more like theme park rides than games, and while both demos provided users with limited opportunities to interact with the environment, they always ended the same way. Only one piece of software at the Morpheus booth – a multiplayer, bomb-diffusing title called Keep Talking and Nobody Explodes – was a real game, and that was originally developed for the Morpheus’ main competitor, the Oculus Rift.

Still, both demos demonstrated the VR unit’s uncanny ability to trick the user’s senses, delivering the all-important sense of “presence” in a virtual world. Players experience a few moments of disorientation right after putting on the headset, but once their eyes adjust to the Morpheus’ stereoscopic 3D display (powered by dual 1080p LED monitors and Sony’s “new 3D audio technology”), the effect is complete. For all intents and purposes, you’re convinced you’re somewhere else.

It’s that sense of immersion that sold SCE Worldwide Studios president Shuhei Yoshida on virtual reality as a concept. The Magic Lab has been playing with jury-rigged VR concepts for years, mostly attaching PlayStation Move sensors to traditional 3D glasses. It wasn’t until Yoshida was able to physically turn his head and see his own digital body standing in a virtual space that he understood the Morpheus’ true potential.

Supermassive Games developer Pete Samuels describes a similar experience. While playing a racing game on an early version of the Morpheus, he crashed his virtual car. Samuels says that as the world spun around him, “I was absolutely convinced I was going to die.”

The experience inspired Samuels and his team to create Jurassic Encounter, in which Morpheus users observe a battle between dinosaurs of various sizes. The sense of presence conveyed by these digital beasts was so “real and disturbing” that Samuels decided to make Supermassive’s upcoming PlayStation 4 horror title, Until Dawn, completely Morpheus-compatible.

Other funny things happened during the Jurassic Encounter demo, too. Samuels noticed that users wearing the Morpheus started unconsciously mimicking the dinosaur’s behavior, similar to the way people mirror each other’s body language during casual conversations. Because users feel like they’re actually in a virtual world, it’s easier to create empathy with digital characters, which opens up a myriad of possibilities for interactive storytelling. While most of the Morpheus’ early demos focus on short, high-adrenaline experiences, Yoshida is confident that slower-paced games will work too. Ideally, the system will provide compelling content for everyone. 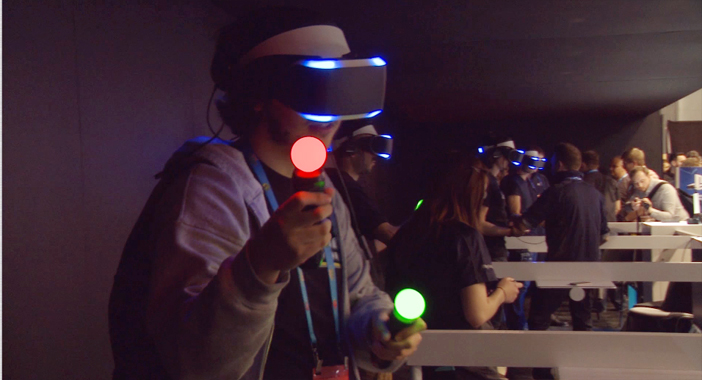 The Morpheus isn’t the only VR device making news, of course. The Oculus Rift has dominated game industry discussions for roughly three years, starting with a record-setting Kickstarter campaign all the way through a $1 billion acquisition by Facebook.

The sudden appearance of multiple VR devices isn’t a coincidence. According to Richard Marks, a Magic Lab researcher and the creator of Project Morpheus, technology has finally reached the point where developers can truly deliver on the promise of home-based virtual reality. Previous attempts at consumer VR systems, such as Nintendo’s ill-fated Virtual Boy, were forced to use cheap displays and subpar processors, which ultimately limited their potential. Now, powerful, graphics-based workhorses like the PS4 are common in living rooms across the country, while high-quality displays are increasingly cheap to manufacture. The real challenge behind Project Morpheus is making all these pieces of technology work together while ensuring there’s enough quality software available for the device when it launches.

The design isn’t perfect, of course, and developers are ready to admit its shortcomings. On a software development level, Samuels notes that any inconsistency in the virtual environment immediately breaks the illusion of a reality. Many shortcuts that developers take while developing traditional games simply won’t work in a VR environment. Virtual reality sickness – the nausea that some people feel while using VR headsets – is still a problem when players aren’t fully in control of the in-game camera.

And of course, the Morpheus only replaces two senses: sight and sound. While the DualShock 4 and PlayStation Move do an adequate job of allowing users to physically interact with virtual worlds, they’re not perfect solutions. Marks and the Magic Lab team want to keep the Morpheus “low encumbrance,” and keep wearable gear to a minimum, but other haptic feedback solutions – devices that emit ultrasonic sound waves in order to mimic solid objects, for example – are still a long way away. The PlayStation Camera can do basic body tracking, but currently struggles with finer details like hands and fingers. Marks seems skeptical about the camera ever tracking feet, so if locomotion is going to be a big part of VR software, the Magic Lab’s going to need a different solution.

There are also questions surrounding the Morpheus’ cost. While Sony promises that the system will be reasonably priced, many of the demos required additional devices, including the PlayStation Camera and the PlayStation Move. In order to get the full VR experience, customers might need to purchase an array of equipment, which might ultimately make the device more of a niche product. With Project Morpheus, Sony has a device that could change the face of video gaming forever, but the company needs to make sure it delivers an experience that’s accessible to the everyday user. Sony will also need to provide enough exclusive content to set the Morpheus apart from the Oculus Rift before setting a release date. Virtual reality has a bright future ahead of it, but it remains to be seen if Project Morpheus will ever evolve beyond a novel, albeit impressive, gimmick.