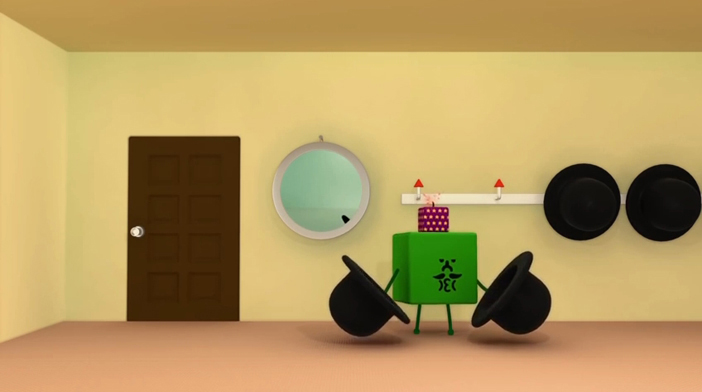 Acclaimed Katamari Damacy game director Keita Takahashi doesn’t like to talk. He opened his PlayStation Experience (PSX) panel, “The Art of Creating Surprise and Discovery in Games,” not with words, but with a long, exasperated sigh. “If there’s any part of what I say that you don’t understand,” he began, “please use your imagination.” He laughed nervously throughout the entire presentation, and when the moderator asked the audience for questions, Takahashi rolled his eyes and shook his head. The moderator ignored him.

Takahashi prefers to communicate through art, not words. When he first met his producer, Robin Hunicke, they “talked” by drawing cartoons together in a notebook. Despite this unconventional conversational style – or maybe because of it – the two quickly became close friends. Now, they’re working together to produce Wattam, the second title from Hunicke’s Funomena development studio.

Takahashi was apparently at PSX to discuss Wattam, but he went out of his way to reveal as little information about the title as possible. “I don’t like to talk about or show things that aren’t finished yet,” he explained, “but I have to, because I’m here.” While Takahashi shared the upcoming game’s earliest concept art – simple cartoons of block-people scribbled in crayon on a cardboard box – he refused to say much more. The brief teaser trailer shown during the PSX keynote (and repeated at the panel) also raised more questions than it answered.

Instead of focusing on the game, Takahashi spent most of the panel describing his creative process. Unlike most game developers, he isn’t motivated by telling stories or crafting worlds; all he wants to do is “create fun in our daily lives.” While studying sculpture in art school, Takahashi noticed people laughing at his whimsical pieces, which included a flowerpot shaped like a goat and a table that transformed into a robot. “Funny stuff makes people smile,” he realized. “And [a]smile is better than thought, or crying.”

Ultimately, however, sculpture’s limited appeal drove Takahashi away from life as a professional artist. While “sculpture and art are put in museums or galleries” and can only be experienced by a few people at a time, video games have a global audience. He explained that video game production is “one of the few jobs that’s [about]creating fun and something familiar [for]people in other countries.”

Look at Takahashi’s previous games, Katamari Damacy and Noby Noby Boy. While both games can be ‘beaten,’ the end goals of each aren’t as important as the moment-to-moment experiences they provide along the way. Rolling the Katamari around or untangling Noby Noby Boy both feel a lot like playing with toys, and that’s the point. After all, games are something we play, not something we do.

Hunicke argues that the ability to both surprise and delight is what makes Takahashi’s games unique. She says, “We really believe that games about curiosity and creativity and exploration have value, and that they add this quality of joy and surprise to the world…. That feeling is usually very joyful because it makes you see the world in a different way.”

That’s a pretty good way to sum up Takahashi’s development process, which starts by taking everyday assumptions and questioning their usefulness. For example, during his presentation, he shared sketches of a playground he designed. The project was ultimately shelved due to budgetary and safety concerns, but the whimsical equipment – a teeter-totter so big that it has to be controlled by dangling ropes, or a looping structure that people can both climb up and slide down – exhibits a playful disregard for convention. He seems annoyed by complaints that his ideas were too dangerous (after all, a little bit of danger can be fun, too), and thrilled by the idea of challenging long-held beliefs.

“There are some meaningless restrictions which people don’t know the reasons for, because they were established long ago,” Takahashi says. By challenging or changing those restrictions, he argues, we create fun. After all, “Things we think are obvious are not really obvious. This is [how I like]to think, because if you think like that, it will open possibilities in our daily life, our job, and in everything.”

Ultimately, Takahashi hopes that his games reintroduce adults to a childlike sense of wonder, and allow people to view the world free of preconceived notions. At playgrounds he’s noticed that “normally parents just watch their kids or talk with other parents.” That’s not right. In Takahashi’s mind, “Parents should stop talking and play at the playground too.” In doing so, people’s perspectives will broaden – they won’t just lead happier lives, but richer ones too.

After all, as Takahashi says, “Putting a restriction on yourself is [what it means to be]an adult – and honestly, who wants that?”