It’s not breaking news that crowdfunding campaigns have opened the door for more of us to be creative. To invent. To actually do something rather than just talk about it. We’ve seen the Coolest Cooler raise over thirteen million; OUYA, a video game console, catch fire snagging nine million; and the revival of Reading Rainbow – yeah, the PBS series. But let’s not forget about your friend of a friend’s film, short, or web series. It’s hard not to notice the pitches to donate in our social media feeds – even the Veronica Mars movie stemmed from crowdfunding. So when producers Jeff Hinman and Jeff Johnson wanted to make a documentary about comedian Bert Kreischer, they looked to Kickstarter to help fill the financial gap.

“It’s interesting,” says Johnson. “Hinman and I were looking for a documentary subject, we were ready to make a film, but just hadn’t figured out about who. Hinman’s family has been friends with Bert’s family for years, and one night over dinner, Hinman was explaining to Bert that we’ve been wanting to make a film. It was kind of kismet. In talking, Bert said he wanted a film made about him, something that his young daughters could one day watch that showed why he was gone all the time while they were growing up.”

An early decision for the producers was how to budget the project. “We basically tried to figure out a realistic dollar amount so we could get fully funded,” says Johnson. “We set it at 20K, but wound up raising over 32K.” Much of the campaign’s success could be attributed to Kreischer and his fan base. “Mike Calta, a radio DJ in Tampa, Florida, and friend of Bert’s, would mention the project on air and we would start seeing donations roll in immediately,” adds Hinman. “The same for Joe Rogan and his podcast – when he had Bert on, we would instantaneously surge. It was this great, very organic, real-time feedback during our thirty days of raising funds.”

Since the campaign ended, it’s taken the team more than three years to deliver the doc. “We’re not exactly thrilled with the time frame, but you run into some things later on that are completely out of your control,” mentions Johnson. “Let’s just say when you’re dealing with a subject that has managers and lawyers, you really need to have some things in writing before you start shooting. We were pretty naive to the business side of things – we thought as long as all three of us [Kreischer, Hinman, and Johnson] were on the same page, everything would be fine. But it’s all worked out and we’ve created something we’re proud of and we hope the backers will enjoy.”

Their journey started off on a bit of a rollercoaster as the filmmakers learned that Kreischer was going to tour in Amsterdam and London, which they wanted to shoot. “Honestly, we hit the ground running and figured if we ran out of money we would continue funding the project ourselves – which we did,” notes Johnson. The ninety-two minute documentary shapes the life of Bert Kreischer as a father, a husband, and what he’s probably most known for – being a party animal comedian known as “The Machine” who tells jokes stemming from a time when he befriended the Russian Mafia. For the storytellers, the key word, from preproduction through post, was authentic: “We wanted to create something that was real and not false in any way,” says Hinman. “Our approach was to make a film that stood up more on the behind-the-scenes footage and story over his performances. We know Bert is very funny, and we knew the stand-up segments would be great, but we wanted to make a film that was two-thirds story, one-third performance. Even after eight months of shooting we weren’t sure if we had enough story.”

During production, they followed Kreischer to a lot of different cities, filming at various comedy clubs and locations – even questioning the comedian’s parents about their son. “Matt Schuler, Bert’s former manager, helped us coordinate where he was traveling and staying. Matt was 100 percent on board with the project and he would even get in touch with the clubs to make sure it was OK for us to shoot there. He was an awesome resource and we really appreciated how he saw the vision of the documentary,” explains Johnson.

The project was shot using a Canon 7D and a Canon XF100. In most cases Hinman and Johnson were the entire crew. For sound, they used a Zoom H4n with Shure lavs and a Rode directional microphone. “One of the most handy things I found to use along the way was a simple Bogen monopod. I could stick it in my belt with a neck strop on the camera and use it as a makeshift steadicam,” says Johnson. “It wasn’t the best, but it did the job.” For low light situations and the comedy club scenes, the filmmakers tapped an inexpensive Sigma 30mm lens to provide the needed latitude at the location. In the end, they wound up with 130 hours of footage. 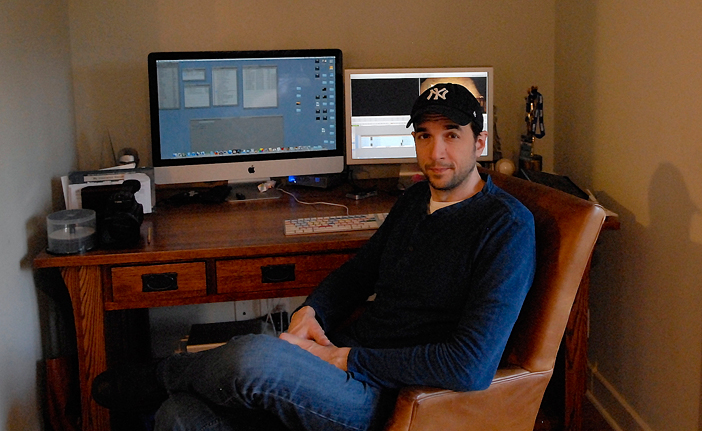 When it came time to edit, Hinman did the bulk of the work on an Avid after returning home from his day job. “Jeff and I both work in postproduction, so one of the hardest things to do was to work for a full day then come home and edit more, but we did it,” says Hinman. “My goal was to work two–three hours a day, four days a week, throwing in some full weekends until it was done. It took us about eighteen months to get a rough cut together. The majority of the time was spent mining those storylines and making them work.”

One of those storylines shows how much time Kreischer spends apart from his family while on the road. “We knew from day one that was going to be the heart of our story,” says Johnson. “This wasn’t about us following around another comedian, but rather how does this guy juggle family life with an insane schedule.”

The film depicts another side of Kreischer as well, his drinking. “We knew that Bert was a party waiting to happen. Rolling Stone did a cover story on him as the biggest party animal in America when he was in college, so it was no secret,” mentions Johnson. “We didn’t really set out to highlight his drinking, but he’s very open about how much he does. He has moments in the film where he shares his concerns about not living long enough to see his kids grow up, and some of those concerns are certainly based on lifestyle.” 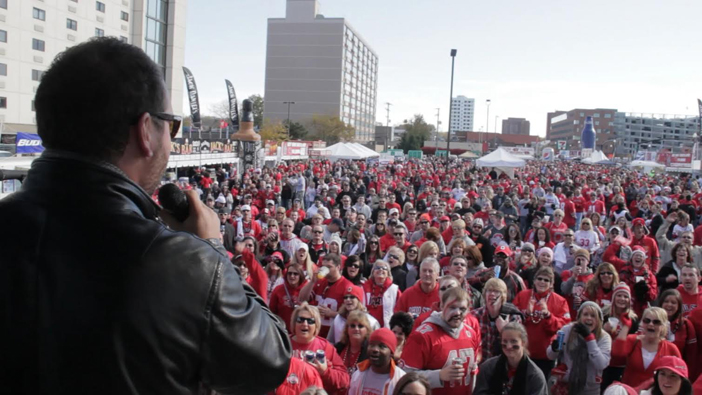 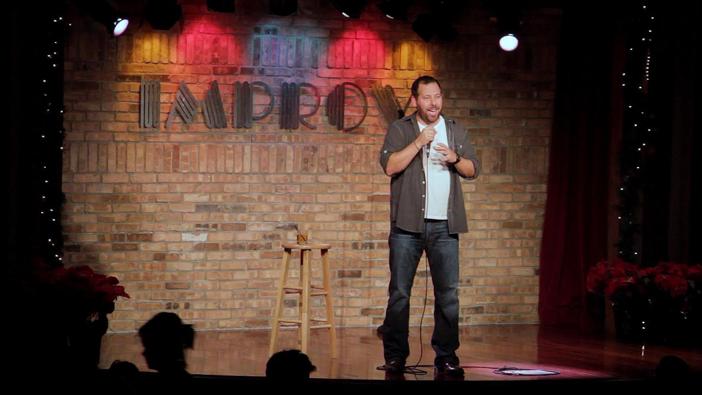 Another aspect of the documentary is a grudge between Kreischer and fellow comedian Jay Mohr, who started telling a Kreischer joke as his own. We won’t give too much away, but the joke is about a time when Kreischer hung out with comedian Tracy Morgan – and it’s hilarious. “The Jay Mohr thing became more important to us as filmmakers as it became more important to Bert while we followed him,” says Johnson. “Initially Bert and Jay were friendly, we even filmed a podcast at Jay’s house for the Kickstarter trailer. As we went along that friendship, we could see it taking a toll on Bert. People would yell the story out from the audience and he would reference it, but he was clearly uncomfortable. Finally one night on stage Bert said that he and Jay used to be friends but they weren’t any more, it sucked, but it was Jay’s choice. At that point I knew I needed to talk to him about it more in depth, and that’s what you get to see in the film.”

To keep the film’s pace, Hinman used what each city gave him. “We had a lot of footage and just tried to find something interesting in the editing room. I had a piece of paper taped to my monitor that was my mantra for editing and it said, ‘Is it funny? Is it entertaining? Is it interesting?’ That was what I considered for every scene I cut.” One of the more challenging sections was Kreischer’s visit to London. “It was tricky to try and tell the story we witnessed with limited footage,” says Hinman. “The club Bert did stand-up at wouldn’t allow us to shoot what we wanted, and the five minutes we were able to film, we had to pay five quid to do so. We rolled when we could, and I think we were able to put together a pretty genuine moment.”

The final cut changed a dozen times along the way, but the one thing the three all agreed on was that “The Machine” story – one of Kreischer’s most well-known jokes – was the ending to the film. The storytellers used a mixture of stage performance and animation to tell it visually: “We actually got the idea from seeing it on YouTube. Corri Loschuk did the animation of Bert’s story for Joe Rogan’s podcast and he was gracious enough to make some revisions to fit our film,” says Johnson. 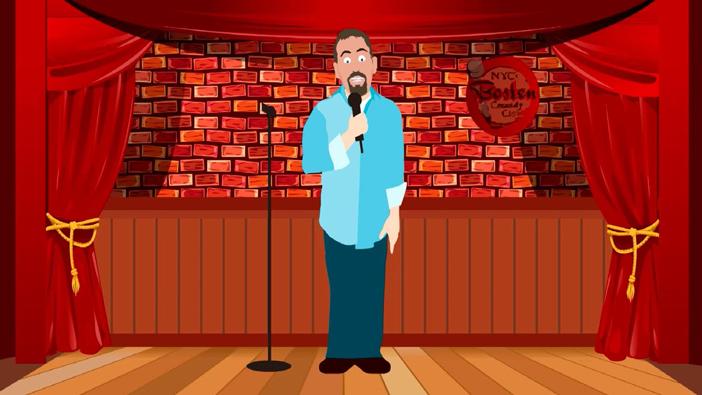 After each night’s show, Hinman, Johnson, and Kreischer would discuss how that night’s version had gone and how it might work to end the film. The version they ultimately ended up using was the last one shot in Portland, Oregon. “I don’t want to spoil it for anyone, but it’s a pretty happy accident that I was even able to film it. We thought we were wrapped but I really wanted to do the Portland show. Hinman couldn’t go, but I had a friend, Jeff Hochstrasser, in Tacoma, and he agreed to come down for it. I can’t imagine any better version of ‘The Machine’ story than the one we got. People will ultimately accuse us of setting it up, but we are not that smart. It’s definitely not the version of ‘The Machine’ you would end a comedy special with, but it’s perfect for the documentary. “In fact Bert even said ‘That’s the ending to our film’.”

Looking back at the process, Hinman adds, ” I think the thing that impressed me the most with Bert is his professionalism. Being a comedian is a job, and there are many job-related tasks, including radio interviews, etc., and he handles it so well. He knows which stories are appropriate for which audiences and he knows how ‘on’ to be at any given time.” For Johnson, “I was afraid we’d end up with a concert film or stand-up special and in the end we didn’t. To me, the most important lesson we took from documentaries we watched before we started was to be open to things happening, don’t have such a specific agenda that you miss the more interesting things that are taking place – that’s where the Jay Mohr story came in. We never set out to have that be part of the movie but it was part of his [Kreischer’s] life at the time, and so there it was.”

Bert Kreischer: I am The Machine will premiere at the NewFilmmakers Los Angeles Festival January 10, 2015 at 10:15 p.m. You can find out more information about the festival by visiting www.newfilmmakersla.com.