The Visual Effects Society, an organization representing the global visual effects community, announced the nominees for the 13th Annual VES Awards, and once again video games made a strong showing – but not necessarily in the places you’d expect.

The VES first included video games as part of its competition in 2004, when Half-Life 2 took the award for Best Video Game Visuals. While the categories have changed over the years, games never disappeared, and they’ve become a fixture of the annual awards ceremony. This year, video games were eligible in a record-setting four categories, and were nominated alongside commercials and television shows for the first time. That’s a big step for gaming, and indicates just how close video games are to achieving parity with more traditional media formats.

In the past, the VES has devoted multiple categories solely to gaming. This year, there’s only one: Outstanding Real-Time Visuals in a Video Game. The rules for the category are simple: games are judged on the strength of their in-game visuals for sections of the game that include some degree of interactivity. Basically, cut scenes don’t count. The game must be completed (no early access titles), and had to have been released in 2014. This year’s finalists are Alien: Isolation, Call of Duty: Advanced Warfare, inFAMOUS: Second Son, and Sunset Overdrive. That’s a remarkably strong list (although DriveClub and Far Cry 4 also deserve nominations), and any of those titles could easily take home the top prize.

Nominees for Outstanding Real-Time Visuals in a Video Game

Of the four nominees, Alien: Isolation seems like the least likely winner. While Alien’s stark lighting and moody sets capture the foreboding horror of Ridley Scott’s 1979 film, the game’s aesthetics feel more like a re-creation and less like something truly new. The Creative Assembly team certainly deserve credit for their attention to detail – for example, the in-game video was filmed on Betamax tapes, just like on the original Alien – and the narrow corridors and industrial hangar bays are faithful to the source material. They’re just not always particularly interesting to look at. Alien: Isolation isn’t a bad-looking game by any means, but compared to the rest of the competition, it falls a bit short.

Deciding between the other three nominees is significantly harder. If the award is based solely on technical achievements, the Call of Duty: Advanced Warfare nominees seem the most deserving winners. Sledgehammer Games developed a brand-new engine for this title, which renders the game’s urban battlefields with an unparalleled degree of realism. Despite the game’s complex firefights and environmental effects, the whole thing runs at a buttery-smooth 60 frames per second. Facial animations are handled by the same system that powers James Cameron’s Avatar 2, creating in-game characters that are more realistic than any others seen in a video game thus far. 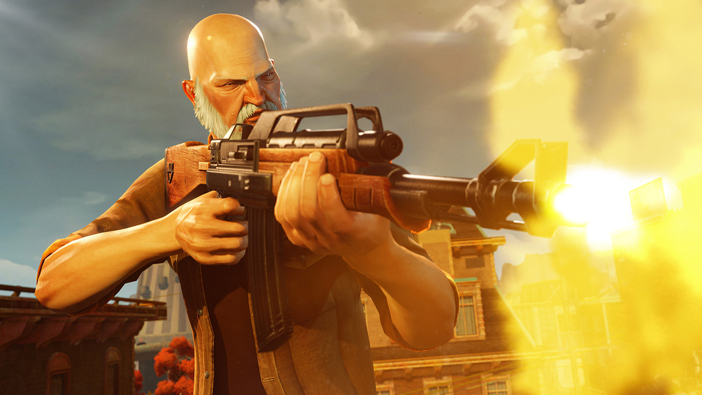 By contrast, Sunset Overdrive and inFAMOUS: Second Son aren’t as technically accomplished – character animations are stiffer than in Advanced Warfare, and both games top out at 30 fps – but in many ways they’re more fun to watch. Thanks to the PlayStation 4’s upgraded hardware and the Sucker Punch team, inFAMOUS‘s virtual Seattle shines, with detailed rain and lighting effects that make the game’s signature superpowers dazzle on screen. Sunset Overdrive’s developers pushed things even further, creating a gaudy neon dystopia that’s perpetually in motion, yet the in-game camera makes sure that the action’s always easy to follow. All in all, inFAMOUS probably strikes the best balance between real-world photorealism and well-rendered fantasy, but it’s hard to be disappointed with any game in this category.

Video games were also eligible for Outstanding Animated Character, Created Environment, and Effect Simulation in a Commercial, Broadcast Program, or Video Games, but the game industry only scored one nomination across the three categories. After a quick look at the rules, that’s not surprising. Both the Animated Character and the Effect Simulation nominations are based on a scant two-minute sample, and most of the competitors use prerendered footage.

That’s just not how video games work, especially now that most cutscenes are rendered on the fly. As powerful as modern consoles are, they don’t have the graphical horsepower to compete with the top-of-the-line 3D workstations. Honestly, the only real oversight in these two categories is DriveClub’s dynamic weather system, which simulates rain with near-perfect accuracy and could easily give other effect simulations a run for their money.

The Created Environment award is a little more complicated. According to VES rules, an eligible video game environment “is a single setting within the story, and not, for example, multiple locations within an entire city or open environment in a video game.” That essentially eliminates video game worlds like Far Cry 4’s Kyrat, Grand Theft Auto 5’s Los Santos, and the kingdom of Thedas in Dragon Age: Inquisition, where the overall world is more important than any single location. Andrey Bogdanov, Mikhail Datcik, Dmitriy Ovcharenko and Ekaterina Bogdanova are nominated for the “Battlefield” level in their well-received but not widely-discussed game War Thunder, but with many big-budget games moving towards a non-linear, open-world design, it’s hard to imagine the most popular titles cracking this category any time soon.

The commercials’ inclusion among the nominees for Outstanding Commercial is important for two reasons. For one, the nominations speak to the massive resources Activision (which published both games) is willing to commit to marketing its biggest titles. More importantly, however, both titles use live-action footage, not gameplay videos, to sell games. That’s either a deceptive marketing move or a glimpse of the future; as the VES nominations prove, video games may not look realistic just yet, but they’re certainly well on their way.