You’re alone in the woods, in trouble. A handheld radio is your only link to the outside world. The woman on the other end, Delilah, seems nice enough — but can you trust her?

That’s the central concept of Firewatch, a first-person mystery title currently in development at Campo Santo. Players control Henry, a man who isolates himself as a fire lookout in Wyoming’s Shoshone National Forest after a series of troubling personal events. When the summer starts to take a sinister turn, he and his boss, Delilah, must work together long-distance to get to the root of the problem. How players choose to manage this relationship will color the outcome of the game. The major plot beats never change, but the two main characters do, creating a unique experience for each player.

Firewatch isn’t the first game to feature an unreliable narrator — lead writer/designer Sean Vanaman lists the first BioShock title as a major influence — but the developers are aiming to create a title that really captures how adults talk to one another. When Delilah speaks, players get only a few seconds to decide how Henry answers. Silence is also a valid option. These choices are one-time-only events and have permanent consequences; like real life, Firewatch has no do-overs and players can’t “lose.” As Vanaman told us, “You don’t get kicked out of a movie if the protagonist dies, but because you care about what’s happening you’re able to feel fear and dramatic tension.” No matter what, the story goes on, and you’ll have to live with the choices you make.

It’s an interesting approach to storytelling, and one that the studio is well equipped to handle. Vanaman and his Campo Santo co-founder, Jake Rodkin, were co-project leads on the first season of Telltale’s award-winning The Walking Dead game, which was widely praised for its innovative and mature storytelling. Other members of the team come from narrative-focused studios like Double Fine and 2K Marin. 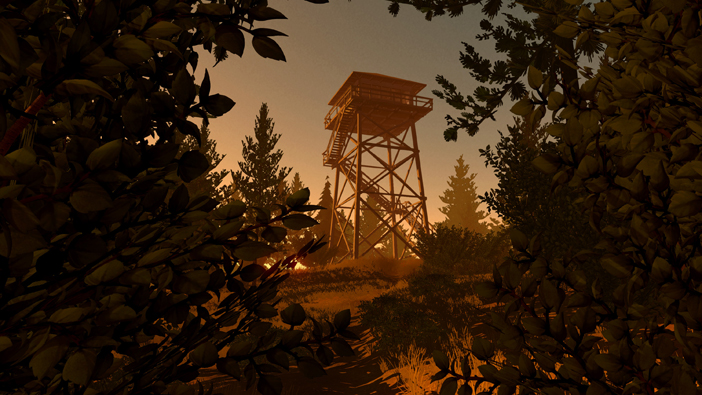 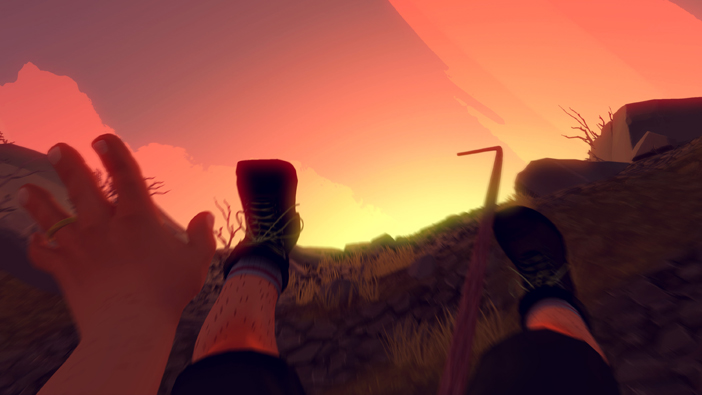 Of course, none of these credentials mean anything if the characters don’t resonate with the audience. As Vanaman puts it, “Firewatch is 100 percent about this relationship, so if it doesn’t work, the game doesn’t work.” Thankfully, Henry and Delilah (voiced by Mad Men’s Rich Sommer and The Walking Dead game’s Cissy Jones, respectively) have a natural, easy banter, which Vanaman partly credits to the recording process.

In many voice-over projects, actors record their lines separately, and conversations are edited together later. That’s not the case here. Both Jones and Sommer have in-home recording booths, and all of the game’s dialogue is captured during conference calls. In a way, that allows Vanaman to have his cake and eat it, too; while the actors can play off one another in a live recording, they’re also separated geographically. Like Henry and Delilah, Vanaman says, Sommer and Jones “are actually developing a real audio-only relationship while we make the game,” making the dialogue that much more authentic.

In addition to relationship management, Firewatch also emphasizes exploration, and Campo Santo promises that traversing the Wyoming wilderness will be a compelling and painless experience. The game runs on a version of the Unity engine that’s been enhanced by SECTR, a module suite that allows sections of the environment to be loaded as needed, and discarded when they’re not. This should eliminate loading times, making traversal feel seamless. As players progress, they’ll receive new navigation tools (a climbing rope, for example) that unlock previously unexplored sections of the forest floor.

Campo Santo is also taking great pains to make the game’s wilderness as compelling as its characters, with artist Olly Moss delivering most of the design work. Typically, Moss will work with Rodkin and Vanaman and design an environment, sometimes taking inspiration from the real-life Shoshone Forest. He then sends the final piece to environmental artist Jane Ng (formerly the lead artist on Double Fine’s The Cave), who works with Moss to translate these images into fully realized 3D landscapes.

It’s not a perfect translation, of course; in a Campo Santo development blog entry, Ng says that the team focuses on capturing the spirit of Moss’ pieces rather than crafting pixel-perfect recreations. His work is focused on minimalist designs and sharp, geometric shapes; it’s a style that evokes the iconic National Park posters produced by the Federal Art Project during the Depression era.. Converting these images to 3D requires more than little technical wizardry.

Moss’ distinct color choices create challenges, too, and are further complicated by the game’s dynamic night-and-day cycle, which changes lighting conditions on the fly. To solve this problem, the Campo Santo team is using a plug-in called Marmoset Skyshop, which gives the Unity engine an image-based lighting scheme. Graphics programmer Paolo Surricchio has also developed proprietary fog and post-render color correction systems, which makes the environment inviting and vibrant no matter what time it is in the game.

It’s extra work, but Ng thinks it’s worth it. Instead of “pooh-poohing ideas that are out of [our]comfort zone,” she says the Campo Santo developers are pushing ahead, and the game’s visuals are both unique and immediately recognizable. The Shoshone forest looks bright and alive, seemingly glowing even in the absence of the titular fire. One can only imagine how the game will look when the trees actually go up in flames.

The sound design promises to be equally as unique, with an ambient soundtrack that changes according to what’s happening in the story. Vanaman says that the sounds players hear may “not necessarily be ‘biologically appropriate’ for the region,” but will always help drive the story. After all, most of the story is told via audio, and designer Chris Remo’s been taking great pains to make sure that the dialogue, music, and ambient noise all work together to create a cohesive whole. “There are parts of the story where you actually just talk to Delilah about a sound you hear — nothing else — and I’m really excited for those,” Vanaman told us.

The Campo Santo team is keeping quiet about the specifics of the game’s story — an excellent choice. It’s a mystery story, after all. The team hopes to get the game out for Windows, Mac, and Linux by the end of 2015, but honestly, if they need to take longer, that won’t be a problem. Firewatch looks like it’ll be worth the wait.