Wednesday March 18th: I started off my first day at SXSW 2015 at the Wild Honey Pie/Pianos/Ooh La La Records/Yeebo Music/Blackbell Records Showcase at Banners. I arrived just as Jeremy Loops started. Jeremy Loops mostly does just that – loops a variety of sounds from instruments –or his mouth – for a unique sound which he often sings over, but sometimes raps over. He’s also occasionally joined on stage by collaborators James Faull and Motheo Moleko who help elevate his live show to another level. If you’re into Jack Johnson or Dave Matthews Band and like hip-hop, you might want to check Jeremy Loops – all the way from out.

If you’re more into pop rock and bands like The Killers, In Flight Safety might be more your speed. A very mainstream pop rock outfit from Canada, they tore through a quick, upbeat set that kept the outside crowd happy. Keeping the indie pop going and the crowd dancing, was Brooklyn, New York outfit Modern Rivals. They’re a young band that reminds me a lot of Vampire Weekend, but a bit trippier. You can tell they have a lot of disparate influences that they manage to meld together nicely. Definitely interested to see how these kids do in the near future.

The pop music continued with Fort Lean. I really enjoyed their jangly, classic rock influenced songs – especially the big, catchy choruses that make you want to sing along. These guys are destined to be playing bigger venues in the near future. Also destined for bigger venues is Bright Light Social Hour. The hometown Austine boys didn’t take long to win over everyone at the show. Their mix of psychedelic jams and dancey beats had the entire packed crowd dancing for the duration of their set, leaving them wanting more. They’re about to head out on tour and I’d highly recommend checking them out.

The sounds definitely changed as I made my way to hear the off-beat, folksy sounds of Jack and Eliza. Bringing to mind bands like She and Him and The Dutchess and the Duke. Their music also nicely employs the sounds of hazy, sixties pop with their simple folk structures. Public Access TV proved they were worthy of their buzz by delivering a raucous set of new wave indie pop. The crowd excitedly danced to the indie band from New York’s catchy and melodic hooks. Just some good ol’ pop rock and roll that’s made for the radio. 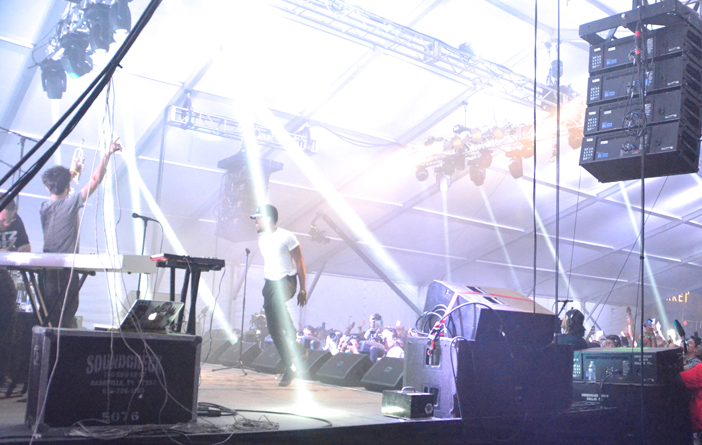 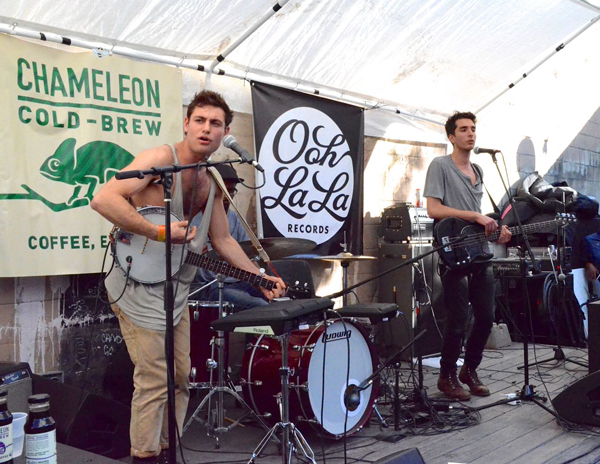 Yellerkin was making some very different sounds – indie pop mixed with electronica and folk. Their sound, especially the drumming, brought to mind basic, early Animal Collective beats. The banjo mixed in with the ethereal and whimsical vocals of the duo make for a truly unique sound that I wasn’t expecting to like, but ultimately found myself enjoying. If you’re looking for something different, Yellerkin may just be what you’re looking for.

After Yellerkin, I made my way over to the famed Fader Fort to see Chance the Rapper. The line wasn’t terribly long, which was surprising since the Fader Fort is one of the premier venues/parties at SXSW with some of the most buzzed about up-and coming acts. As much as I like to see the hot new artists, I do hate waiting. And to say I waited a long time for Chance to go on would be an understatement. Even his band started to seem restless – not to mention everyone else in the crowd. Just before I decided to skip out, and crowd levels of annoyance reached their highest levels, Chance took the stage. The crowd immediately forgave him and started going crazy for the Chicago rapper. Chance has a great flow and stage presence and is someone you’ll be hearing even more about in the near future.

I wanted to make sure to get into the NPR Party – yes, even National Public Radio has a strong presence at SXSW. I was excited to see TV on the Radio for the umpteenth time, but really excited to see much-hyped Australian artist, Courtney Barnett. But before she took the stage, I got to see someone I normally wouldn’t have – Shamir and Boogie. I really had no idea what to expect as they took the stage in bright neon outfits making me think of early ‘90’s style. Maybe something like Technotronic? I wasn’t far off – the music was a mix of house, pop, disco and funk that got everyone near the stage dancing in one big frenzy. The kids at this NPR Show were really into it, so I wouldn’t be surprised if you hear more Shamir really soon and probably not just on NPR. 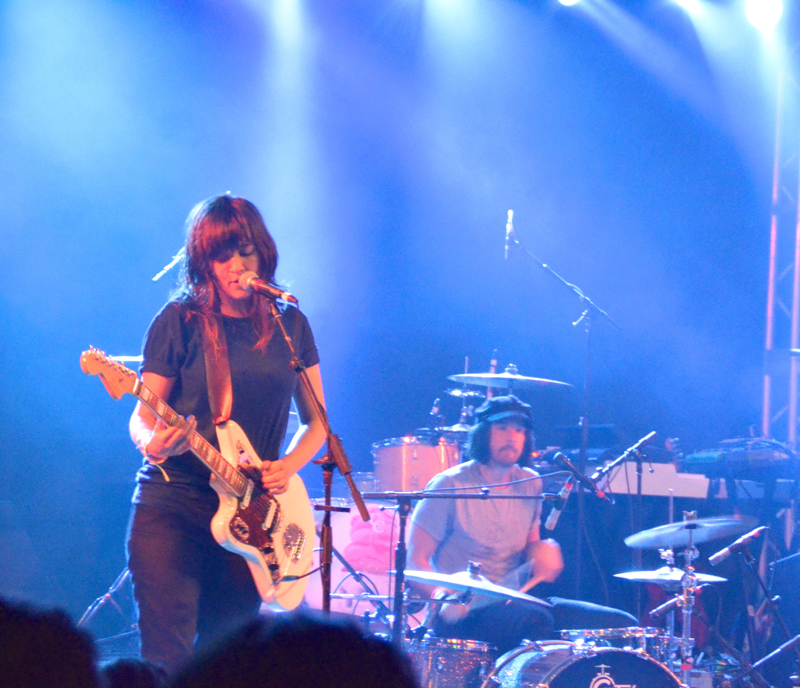 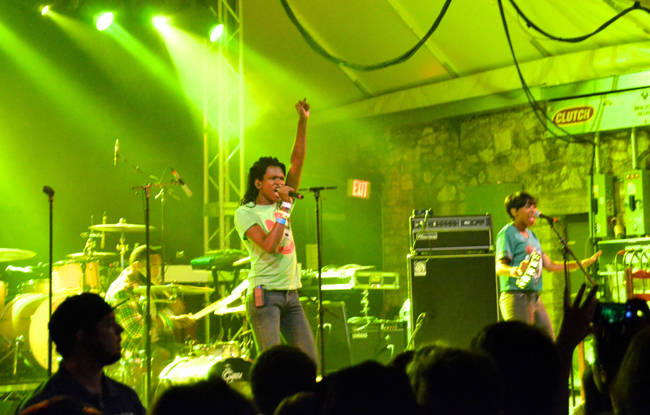 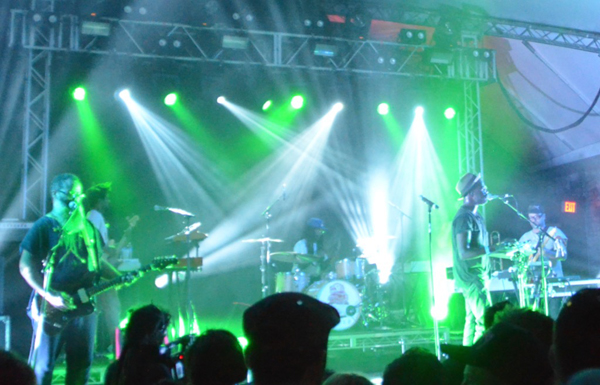 TV on the Radio

Up next was Courtney Barnett. From Pitchfork to NPR and every other music site out there, Courtney is getting best new music or a must see act. All of this buzz is with good reason as Courtney Barnett did not disappoint. The new album, “Sometimes I Sit and Think, and Sometimes I just Sit” is a banger of a rock album owing a lot to 90’s alternative and overcranked distortion pedals. Her wry sense of lyricism is still intact and she performed graciously for a large adoring crowd. As far as I’m concerned, all of her hype is well-earned and I’d recommend you picking up the new album and checking her out when she comes to your town.

After I retreated to the back of Stubbs to see the next artist Stromae. They went on to much fanfare, but I personally did not get his Belgian style of electronic dance pop – or most of what he was saying to the audience. It also didn’t feel like a great fit sandwiched between Courtney Barnett and TV on the Radio, but NPR is known for its disparate music taste. Unfortunately this wasn’t the radio, so I couldn’t switch it to something else. I’m sure Stromae is for someone just not for me.

TV on the Radio is a band that does not disappoint live. They decided to kick things off with the song “Young Liars” off the EP with the same name that was released when Kyp Malone officially joined the band. Live, “Young Liars” is a real slow burn as the song takes time to build into a full blown psychedelic wall of sound – it’s a great set opener. After that, the band was off, rocking just as hard as ever on new and old tunes alike. They always have high energy and put on a very entertaining show – they’re touring their new album “Seeds” right now and it’s an absolute must see.