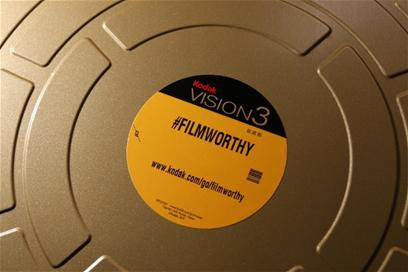 Los Angeles, CA — Kodak will celebrate the 50th birthday of the Super 8 format at Cine Gear Expo, which takes place June 5-6 on the Paramount Lot in Hollywood. Activities in Kodak’s area (#XO 102) include Stop By Shoot Film sessions with Pro8mm, a preview of the new Logmar Super 8 camera, and an opportunity to win a Super 8 production package.

To highlight the weekend’s festivities, registered Cine Gear Expo attendees can stop by Kodak’s Airstream to get a hands-on opportunity to shoot Super 8 film for free. Kodak and Pro8mm will host four Stop By Shoot Film workshops, beginning Friday, June 5 at 5:45 p.m. and continuing on Saturday, June 6 at 12:00 a.m., 1:30 p.m. and 3:00 p.m. Signups will be taken at the Kodak booth (#XO 102) on a first-come basis. Stop By Shoot Film sessions are designed to provide hands-on opportunities to use motion picture film. Participants receive basic training and a roll of KODAK Super 8 film, which will be processed and scanned to HD in Pro Res by Pro8mm. (Note: photo ID required to check out the camera).

Cine Gear attendees have the opportunity to win a valuable Super 8 production package, which includes over $200 worth of Super 8 film from Kodak, and $500 in services from Pro8mm.

The highly anticipated Logmar Super 8 camera will be on display in Kodak’s area. Made for professionals, the new camera will be exclusively distributed by Pro8mm, and features an electronic viewfinder, WiFi remote control, audio recording, and much more.

“Super 8 has stood the test of time.,” said Andrew Evenski, president and general manager of Kodak’s Entertainment & Commercial Films. “It is the first love and experience for so many filmmakers, from first time users to Oscar® winners. Super8 has launched careers, captured life’s most important moments, and preserved art for five decades. These are the same reasons Super 8mm endures today, and will remain a strong format of choice in the future.”

Filmmakers who are interested in producing their next project on film are encouraged to come by the booth and learn more about the support Kodak can offer. Evenski noted, “Film isn’t just for the studio’s tentpole productions. It has always been a big part of the independent and emerging filmmaking community. We want it to stay that way and are here to work with filmmakers to make shooting on film a reality.”

About Kodak
Kodak is a technology company focused on imaging. We provide – directly and through partnerships with other innovative companies – hardware, software, consumables and services to customers in graphic arts, commercial print, publishing, packaging, electronic displays, entertainment and commercial films, and consumer products markets. With our world-class R&D capabilities, innovative solutions portfolio and highly trusted brand, Kodak is helping customers around the globe to sustainably grow their own businesses and enjoy their lives. For additional information on Kodak, visit us at kodak.com , follow us on Twitter @Kodak, or like us on Facebook at KodakNow.