Leonardo DiCaprio fighting for survival on the harsh American frontier? Director Alejandro G. Iñárritu teaming up with cinematographer Emmanuel Lubezki to shoot a film entirely with natural light? The Revenant is the cinematic experience we’ve been waiting for—inventive and raw.

Academy Award winner Iñárritu (Birdman, Babel) directed and co-wrote the film with Mark L. Smith, which is inspired by true events and loosely based on a novel by Michael Punke. The story follows renowned explorer Hugh Glass (Leonardo DiCaprio) as he sets out on an expedition through the uncharted American wilderness. Things turn dark quickly when Glass is attacked by a bear and left to die by his own hunting team and supposed confidant, John Fitzgerald (Tom Hardy). An expedition soon turns into one man’s will for survival and revenge.  20th Century Fox, the studio behind the film, describes it as “immersive and visceral”, “capturing one man’s epic adventure of survival and the extraordinary power of the human spirit.”

For arguably the number one cinematographer in Hollywood, Emmanuel Lubezki (Birdman), taking on a large scope film is no new feat. However, collaborating on a film that works to expose nature and human spirit in its rawest form, as well as shooting entirely with natural light, was an exciting challenge that we can’t wait to see play out on screen. 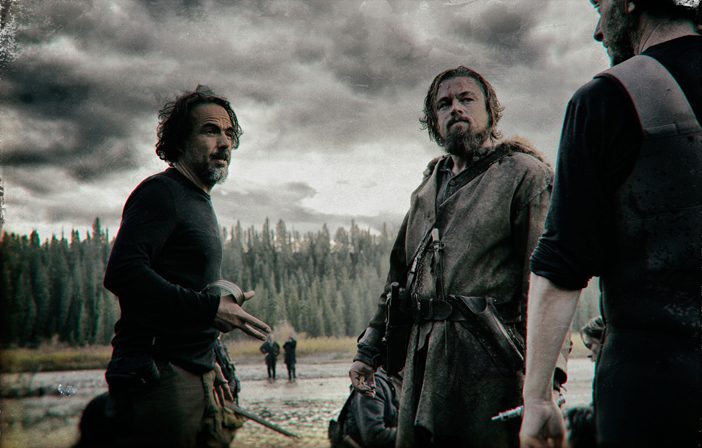 Shot on the new ARRI Alexa 65, the trailer gives us a taste of Lubezki’s beautiful, stark cinematography. The film’s dark, cold color palette reflects the narrative of the film and captures the unforgiving climate where the action unfolds. Shot on location in Alberta, Canada, temperatures were so cold that the monitors would freeze. The fact that the crew put themselves in this position shows the pure dedication that this film had gunning behind it. Visual Effects Supervisor Richard McBride (Gravity) worked with Iñárritu and Lubezki to produce a final product film that was realistic, stark, and unembellished by CGI. Picture editor Stephen Mirrione (Birdman) will bring the final vision to life.

The Revenant, boasting the tagline “Breathe. Fight. Survive,” is due for a December 25, 2015 release. Christmas can’t come soon enough!