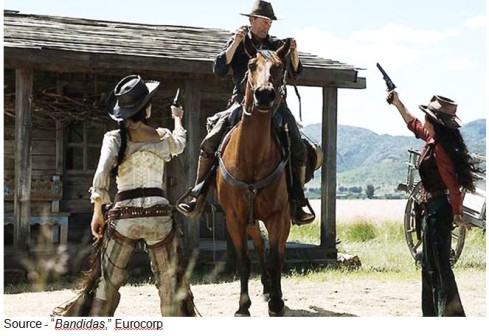 I’m not a huge fan of award shows.

Honorees thank everyone for their award, the events are long and IMO kinda’ boring.

However, I was curious how things would go for the Emmys this year because of all of the pre-event noise on the lack of diversity in the business, creative/production and talent sides of Tellywood.

The award committee showed they were prepared to cover multiple bases when Jill Soloway took home an Emmy for directing Transparent, a transgender father comedy.

But the best signs of change came with:

But with all of the drama surrounding the rapidly shifting audience preferences, maybe it was the perfect time to show change is possible.

You know, lead by example.

Turn control over to someone who is willing to make changes they think will be of interest to the audience rather than the accountants.

Discussion Continues
It’s true, the Emmy show didn’t resolve the industry’s gender and diversity problems; but it did raise the bar for the rest of the award events for the year and perhaps for all organizations.

I’m looking forward to finding out if the attendees at this month’s HPA’s (Hollywood Post Alliance) women in post and SMPTE (Society of Motion Picture and Television Engineers) think there will be any real shift.

With discretion being the better part of valor, I probably don’t need to point out that every industry is faced with the same challenge – making the best use of the best talent, regardless of race or gender.

Change won’t come as fast as many would like, but business/industry has taken an important first step by making a commitment to change.

Companies are increasingly looking at ways to identify people with different backgrounds to be on their board of directors including establishing term limits, modifying director searches to consciously include women and minorities based on experience rather than stale business resumes.

Management realizes that for their firm to achieve its fullest potential there is a need for women to gain equal recognition, pay, and status in the workplace; and they need to get more of them in supervisory roles.

I tried to relate my past work experience with a recent workplace sexism study by Ekaterina Netchaeva of Bocconi University in Milan that concluded men felt their masculinity was threatened when they had a female supervisor.

While in the military, I had a very good boss who happened to be female.

Frankly, I got along a helluva’ lot better with her than I did the male who worked under her.

She’d listen, discuss (and cuss); we’d arrive at a plan of action.  If it was more her idea than mine, it didn’t matter; it would be done. 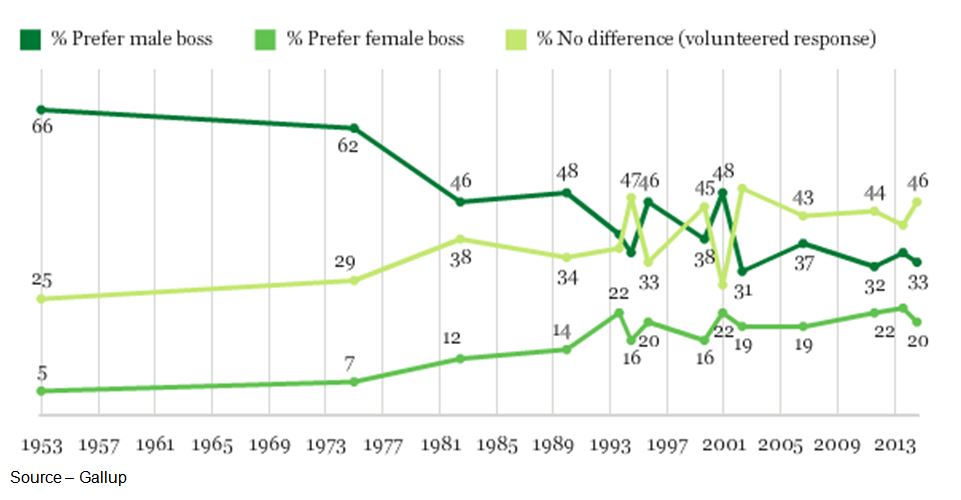 Slim Margin – According to Gallup, Americans (male and female) prefer a male boss but the tide is slowly shifting to the point where it just doesn’t matter as long as he/she is a good boss.

Unlike the recent Gallup report, my experience was that her gender really didn’t matter.

I can’t think of a time I ever felt emasculated.

Areas of Strength
The fact we all have to face is that there are certain management areas where women (regardless of race) are better than men.

That’s apparent when you consider such global random sample reports such as Zenker/Folkman’s study of leadership in high-performing companies.

They rated men and women in 15 business functions, and females were rated more competent in 12 of them.  That included areas that are usually dominated by men – sales, product development, legal, engineering, IT and R&D.

Perhaps Geena Davis, of Thelma and Louise and the Geena Davis Institute on Gender in Media, was on to something when she suggested a solution for the entertainment industry that might work for business, “Go through the characters and change a bunch of the names to female.”

In other words, instead of teaching women how to make it to the top, change the way the top operates. 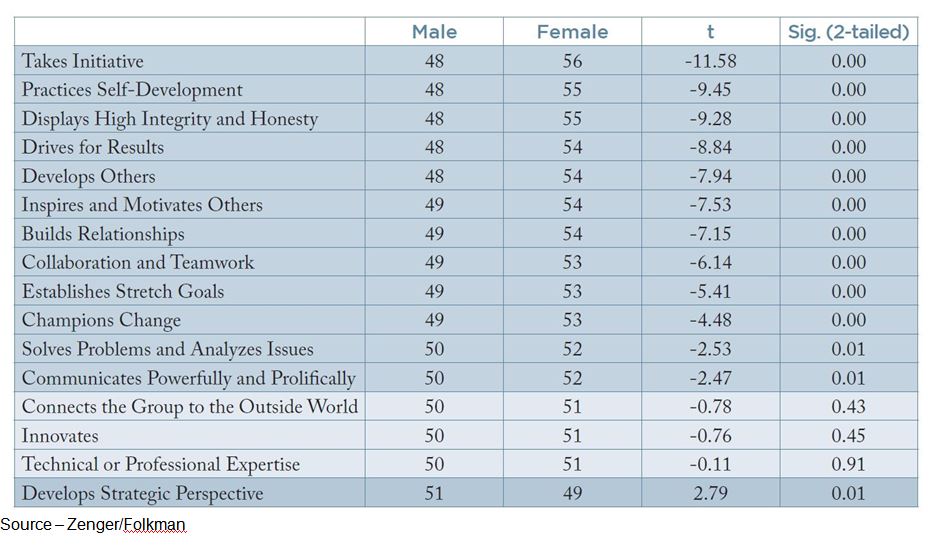 Equal May Be Better – In many of the corporate functions, female capabilities rated higher than men. In overall leadership performance, the two sexes were almost equal with women having a slight, just a slight, edge.

Of the competencies in the Zenker/Folkman study, females were rated more positively by their managers, peers and others in the organization as well as indirect reports.

True, women are better at nurturing competencies such as developing others and relationship building; but the major differences between guys and gals were in taking the initiative, practicing self-development, integrity/honesty and focusing on results.

Looking at the numbers, it’s difficult to fully grasp that even though women as bosses have made significant progress, Tellywood and business in general have a long way to go.

Face Uncertainty
Facebook’s Sheryl Sandberg in her book Lean In notes many women have difficulty in understanding and appreciating their competency and success.

Sandberg summed it up nicely in Lean In:

“Multiple studies in multiple industries show that women often judge their own performance as worse than it actually is, while men judge their own performance as better than it actually is. Assessments of students in a surgery rotation found that when asked to evaluate themselves, the female students gave themselves lower scores than the male students despite faculty evaluations that showed the women outperformed the men. A survey of several thousand potential political candidates revealed that despite having comparable credentials, the men were about 60 percent more likely to think that they were very qualified to run for political office. A study of close to one thousand Harvard law students found that in almost every category of skills relevant to practicing law, women gave themselves lower scores than men. Even worse, when women evaluate themselves in front of other people, or in stereotypically male domains, their underestimations can become even more pronounced.”

Women shouldn’t feel singled out because men have had the same self-doubt, including Albert Einstein, who once said, “The exaggerated esteem in which my lifework is held makes me very ill at ease. I feel compelled to think of myself as an involuntary swindler.”

There’s nothing wrong with self-doubt (male or female). In fact, it’s a healthy part of leadership. It shows you considered the pros/cons, the upside/downside.

The key to being a good leader is being strong enough to make changes to achieve the group’s goal.

Good managers at every level are strong and compassionate, able to listen and help, able to move effortlessly between male and female traits.

Almost every organization has come to realize the power of the new way of evaluating, selecting leaders. 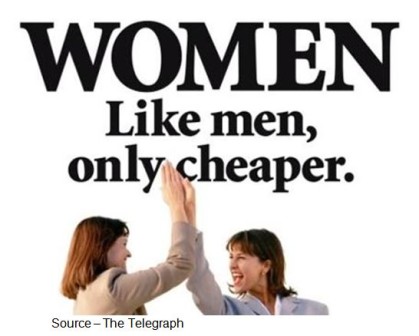 One of the most difficult hurdles Tellywood and businesses will have to overcome is to quit counting skirts and focus on the individuals’ management strengths and weaknesses.

Part of that hurdle is most obvious – equal pay!

Diversity and equal pay should go hand-in-hand, but it continues to be a slow and almost painful process to move the needle.

Perhaps not unsurprising is the fact that business parallels the M&E (media and entertainment) industry when it comes to having equitable representation in positions of management. 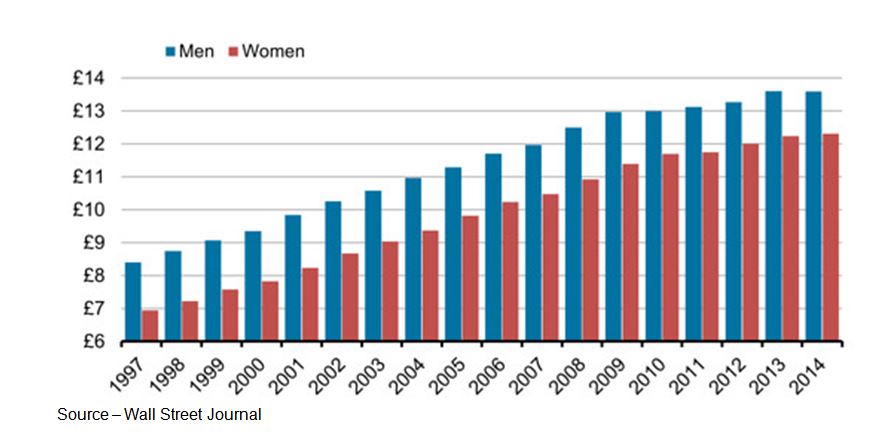 Coming Up Short – The number of women in management positions has risen over the past few years but the equality of pay continues to lag. Researchers reported that men tended to focus more on a higher salary than the opportunity, challenge. Women’s wages are catching up but slowly, very slowly.

As companies strive to develop race and gender equality (responsibility and pay) in the workplace and events like the Emmys turn the spotlight on the few successes Tellywood has in this area, more people are recognizing the need for change.

To keep things moving in the right direction in business and the entertainment industry, we have to constantly remind ourselves of Tyler Jackson’s observation, “Always count your bullets, senoritas.”