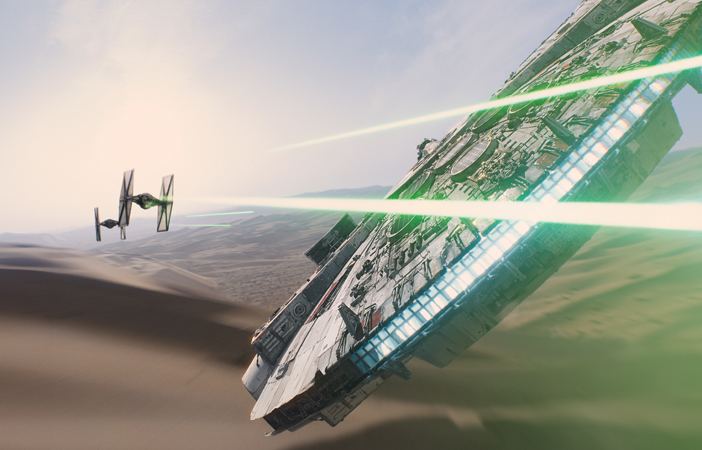 It’s already a good awards season for The Force Awakens’ visual effects supervisors —yes there are two —Roger Guyett and Patrick Tubach. En route to Oscar night, where the Star Wars crew will compete against the practical effects of Mad Max: Fury Road and the “naturally” rendered digits in The Revenant, they’ve already picked up a key win from the Visual Effects Society in their “Outstanding Visual Effects in a Photoreal Feature,” category—the Society’s “best picture” trophy for an FX-driven film.

We caught up with Guyett and Tubach, along with fellow winner Chris Corbould, the film’s special effects supervisor, and Neal Scanlan, who oversaw the “creature shop” for the film, on the Disney lot before the awards circuit lit up like the beam on a Jedi’s sidearm.

We started by asking Guyett and Tubach about their previous work with director J.J. Abrams, helping to reboot the Star Trek franchise. What was the difference between being able to play around and reinvent in one “iconic” sandbox, while needing to more carefully “preserve” so many well-loved toys in another?

Guyett replies that “when people say Harrison Ford got to be Han Solo and Indiana Jones, I sort of feel the same way about us,” he says of the “apparent obsession of working with movies with the word ‘star’ in them.” 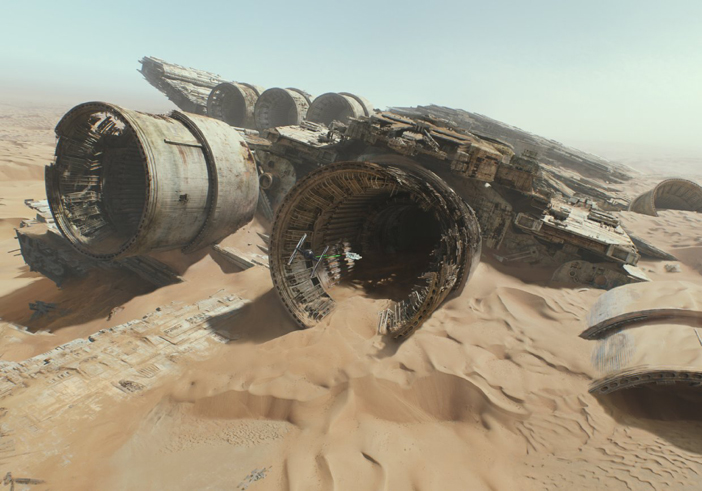 “But Star Trek was sagging a little bit—and we were able to give it a kick in the tush-tush. They went through phases in those movies where they would re-invent themselves,” Guyett points out. So in their own “futures,” uniforms changed, Kirk became an admiral, etc. There was a sense of time moving on for those in the Federation.

But aside from Han Solo and Princess-now-General Leia getting older, for Star Wars, “it was a much more subtle process. Our brief was much more straightforward. The challenge was to find the right blend of naive charm and the technology they had.  And at the same time, bring this kind of excitement of just extending on that same path—is that the real Millennium Falcon taking off in the desert!?”

“It’s one of those things,” Tubach adds, “where you look at the fact the movie was thirty years ago—but everyone’s tastes have changed, as much as they say they love it,” He mentioned the entire generation that has grown up with digital technology since, both in their hands and on their screens. “But you are not off the hook from having to wow audiences the way they felt wowed the first time they saw Star Wars,” he emphasizes.

“It’s just really about making it believable, as real as possible,” Guyett continues. “Soaking it in the DNA of the original franchise and making it a subjective and immersive experience.”

“We had to stay true,” Corbould agrees, “but how do we bring it up to date?” 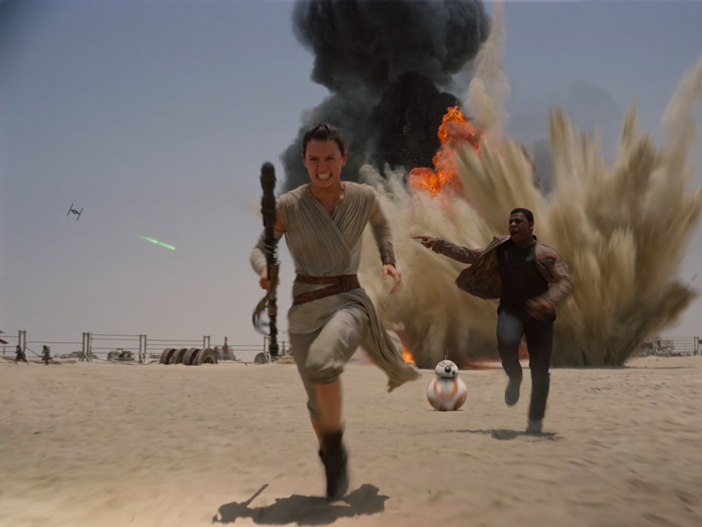 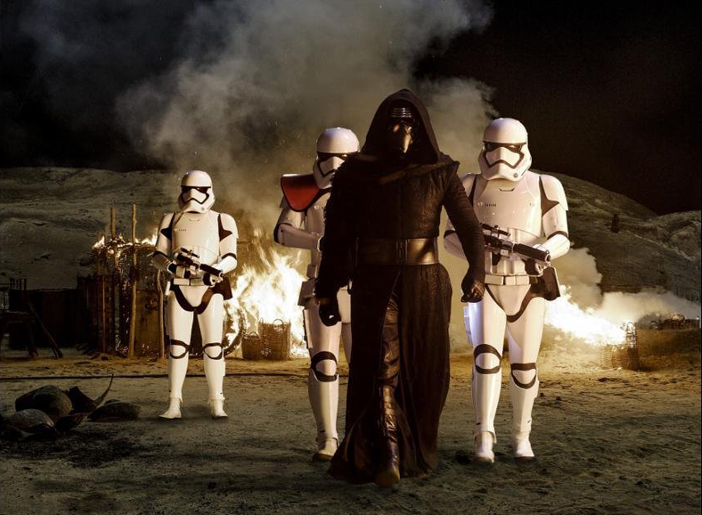 “From the creature perspective,” Scanlan says, “it’s a world that somehow you feel you’ve seen before.  You feel comfortable in it. You don’t feel completely estranged. One of the things Isay is that when you’ve got to get your car fixed,  there’s a compressor in the corner of the garage. And when you watch Star Wars, that compressor seems like it’s in the corner somewhere. That was the thing in the concept designers’ minds. To hold on to that cherishable world that George had.”

For Corbould, it really came alive when they ventured into the desert to create the village on Jakku where the First Order stormtroopers attacked. “It was magical!” he says. “There wasn’t a window in sight we could break, so we really went to town.”

For all the explosions they were rigging, they “ran through those two or three times, then introduced Daisy (Ridley) and John (Boyega),” to what the plans were. “What do you think of this? Then they could concentrate on their acting.”

And for Ridley, there was also the matter of Rey’s speeder. “We spent a lot of time with Daisy. We had a motorized four-wheel chassis with a 1000cc engine on it. It could speed across the desert, and then the CGI guys could paint it out. It was a really good marriage between CGI and practical effects.”

And as with any good partnership, “there was a lot more freedom to be a little more creative,” Tubach recounts, especially compared to the earlier Star Trek universe where more aspects of the universe were spelled out. With The Force Awakens, there was “still a feeling there were things you haven’t discovered.”

Exactly the kind of thing that keeps a marriage fresh.