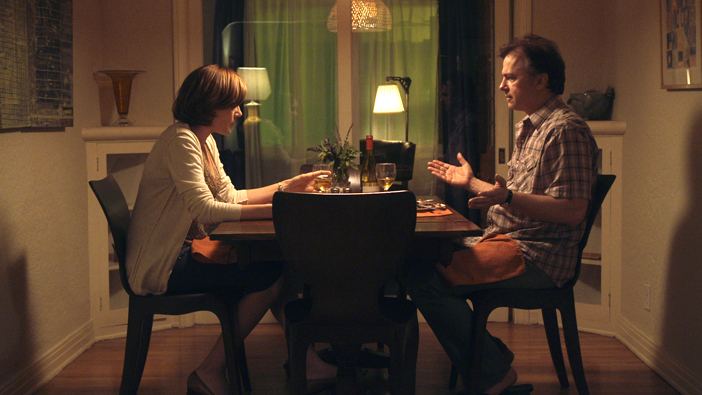 I hope that nothing I say here will be construed as antiestablishment or against the status quo of the film industry. I embrace the industry. It has provided me with a great career, and most importantly, the freedom to pursue some other things about which I am passionate. Besides, there is no place more magical than a film set.

My primary work is as a production sound mixer for motion pictures. I have been lucky enough to win two Academy Awards, one for my work on Jurassic Park, and the other for Saving Private Ryan. But like many in the industry, I have always wanted to make my own films. I know of directors of photography who have made the transition to directing, and of course it’s quite normal for writers and film editors to do so. But I’m not aware of any other production sound person who has done it. If you have – please get in touch with me!

But a huge benefit of current technology is that almost anyone can go out and make a film – for very little money. Does that mean you should make a film? That question begs another one: Do you have something to say? But that’s for you to decide. The point is that you can do it.

In 2011, my wife Jennifer Young, our friend and fellow filmmaker Judy Korin, and I set out to make a micro-budget feature called Finding Neighbors. Our model was loosely based on what Mark Stolaroff teaches in his No Budget Film School seminars, which are in turn based on a filmmaking paradigm pioneered by a (now defunct) company in New York called InDigEnt. Recent examples of other micro-budget films are Blake Robbins’ The Sublime and Beautiful and Sean Baker’s Sundance favorite, Tangerine. You can learn more about the project by visiting our website at FindingNeighborsMovie.com. 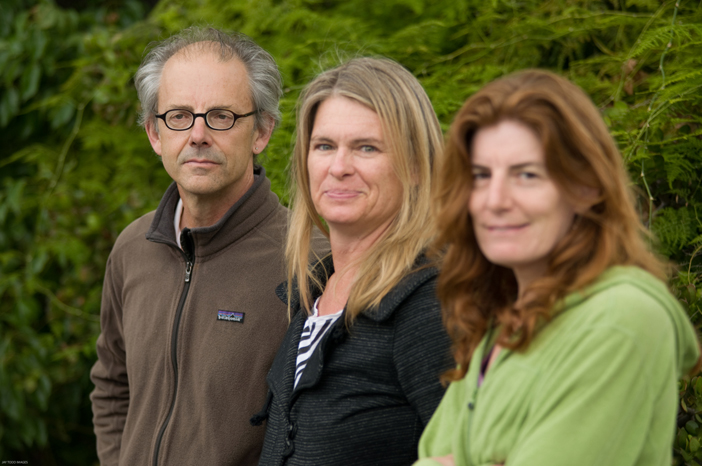 We shot Finding Neighbors for seventeen days in our Los Angeles neighborhood of Atwater Village in May and June of 2011. After principal photography, we cut the movie for approximately five months with editor Travis Hatfield, who did a superb job. We had several focus group screenings during this time and incorporated much of the feedback. In the fall of that year we closed down the editing room and I left to go work on the production of Lincoln.  The break was fortuitous as I returned home with a new perspective and continued to fine-tune the film, culling through outtakes for performances and working to streamline the ending. Late in this process, Heather Persons (Sunshine Cleaning) came in for a couple of days as a consulting editor. I would highly recommend doing this, as Heather brought fresh eyes to the movie and helped us lose a lot of material that was redundant or unnecessary.

Around this time, we had a very unfortunate experience with a post sound house here in Los Angeles, resulting in the depletion of a good amount of our funds – with a lot of work still to be done. So Jennifer, Judy, and I staged a very successful Kickstarter campaign late in 2012 to help us move forward with the animation and the other remaining post expenses. This set us up to have an unbelievably positive experience with many great folks while mixing at Skywalker Sound.

Finding Neighbors premiered at the Austin Film Festival late in 2013, and we spent the greater part of the next year taking the film to festivals across the country – where the film won multiple awards. Because of the positive response, there were several distribution companies interested, so we entered into a protracted seven-month negotiation period with one of them which fell apart at the eleventh hour due to what we thought was a minor contract disagreement. This ended up being a fantastic turn of events though, as we then connected with Strand Releasing and fairly quickly realized an agreement, which probably wouldn’t have been available to us seven months prior. Strand is recognized as one of the leading distributors of foreign language, American independent, and documentary films in the United States. We are delighted to report that Strand rolled out Finding Neighbors on digital platforms on September 22 of last year.

So the film got released four and a half years after we began work on it. This is not so unusual in the indie world!  But let’s take a minute to note some of the ideas behind the micro-budget film model. 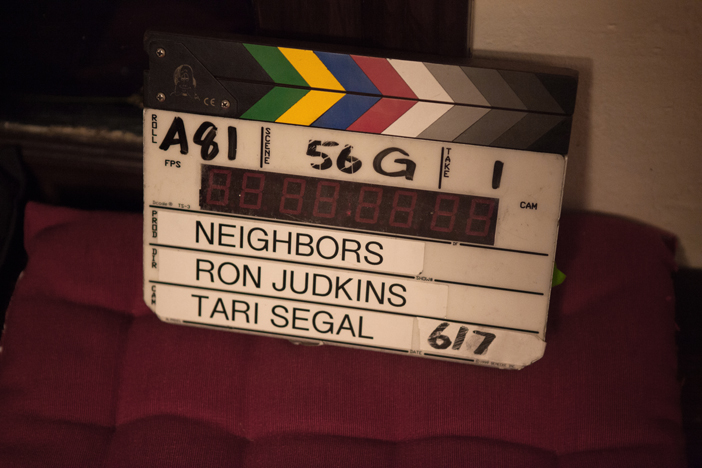 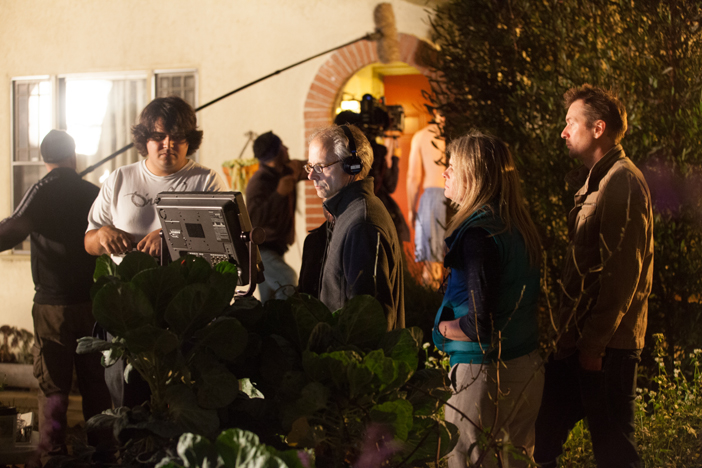 The Micro-Budget Film Model: What it is and what it is not 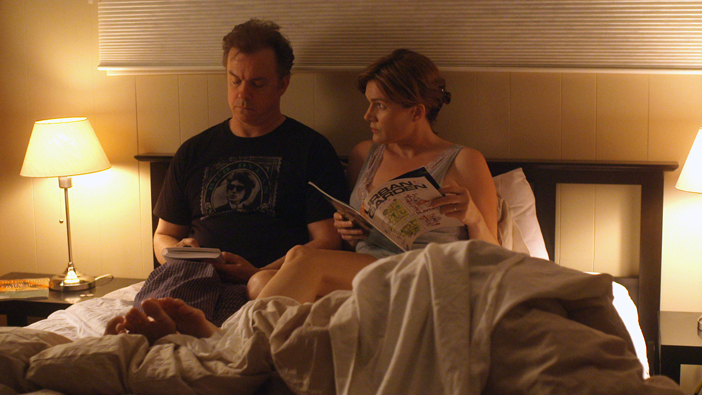 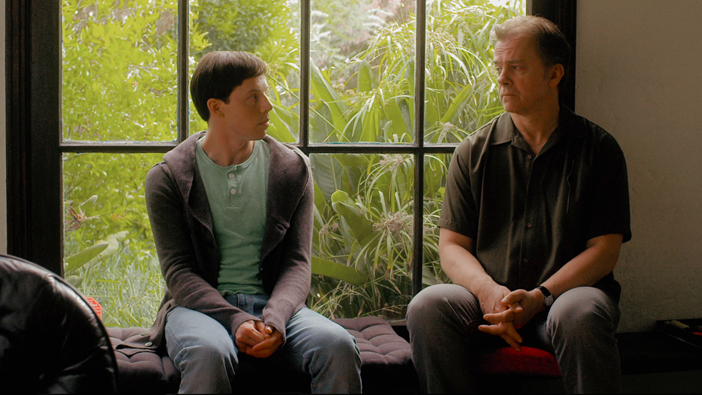 Creating value
As producers, Judy, Jennifer, and I always strove to create value. Because we couldn’t pay folks much, we were always looking for ways to provide good reasons for people to want to be a part of what we were doing.

Even in our social media and marketing we worked to engage people by providing value. On our Kickstarter campaign we produced several videos about filmmaking technique: about how we created the animation, about the experience of the many women on our set, about the creative experience of creating a film scene from real-life experiences, and more. As I write this, I’m working on a piece about the working style of the talented Ronit Kirchman, the music composer on the film, and another one which is a reflection by Jennifer, Judy and myself on the making of the film, three years later. I’ve gotten a lot of feedback from people who have enjoyed and learned a good deal from these videos. The philosophy behind our Kickstarter campaign was to not just say “Hey, give us some money!” but to lead with providing value up-front to potential contributors.

As for cast and crew, we were always looking to create what we called a “win-win” relationship. The crew member “won” by taking advantage of an opportunity to do something new or stimulating in their career, while we the producers “won” by enjoying the talents and energies of all involved. This completely changes the atmosphere on a micro-budget set from one of exploitation (everyone making so little money) to one where everyone is absolutely happy to be there. Along with this, we structured a financial framework under which every participant, large or small, shares in any potential profit made from the film. Everyone is invested in the game. 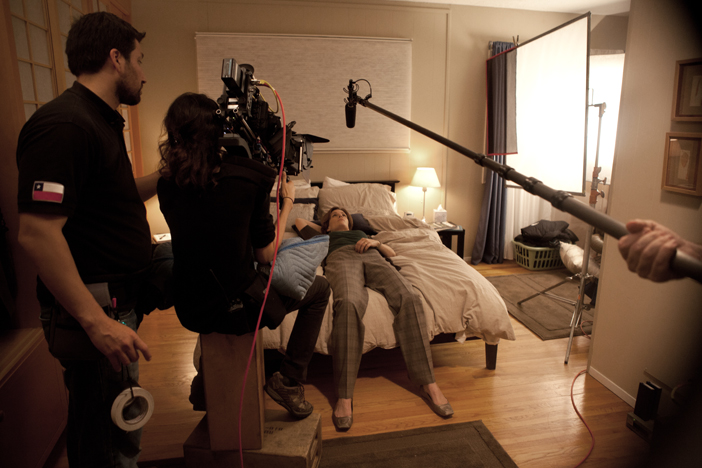 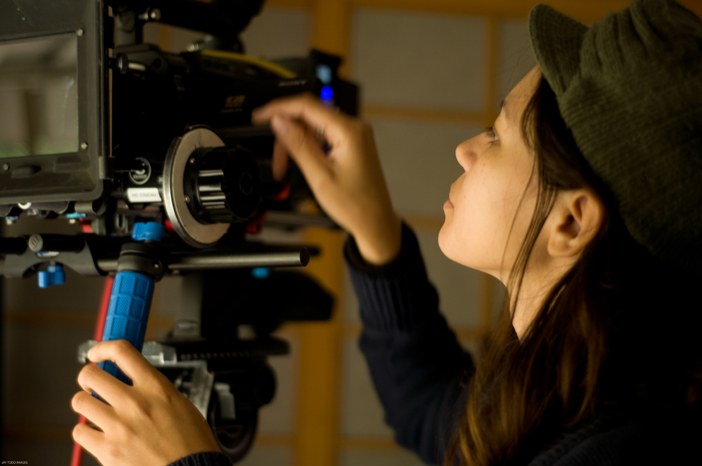 Are there things we would do differently?
Sure there are! I think it would be much better to actually cast the principal roles of the film before setting a start date in stone. Of course, there is an axiom that if you don’t actually set a start date and work toward it, you will never make your film. But this creates an incredible amount of stress. You’re searching for cast – and have offers out waiting to be considered – while that start date is ever approaching! Don’t get me wrong, I’m completely happy with the cast of Finding Neighbors. But I believe that the majority of the success or failure of any film is due to casting. So as a filmmaker, you want to be working through that process in as considered and methodical way as you possibly can.

The twelve- to eighteen-day micro-budget shooting schedule does work against you creatively. After the meeting where we went through the first rough draft of the Finding Neighbors shooting schedule, I basically broke down in tears! There was no possible way that I could make a film with that schedule. Since you’re making a film in a completely nontraditional way to begin with, why not reinvent that process so that it benefits you as a filmmaker? Create a longer shooting schedule with a smaller crew. Allow for a more improvisational style. Let the shooting process become more experimental. These are all things I’m mulling over for the future.

We would also take EPK (Electronic Press Kit) and production stills far more seriously. We got burned for not having proper EPK and marketing photos, and have had to do a lot of work to try to correct this deficiency. We would also want to have more of a fallback distribution plan in place. Is the film you dream to make one that would lend itself to self-distribution? Are there easily identifiable niche audiences for it? These are important questions to ask. 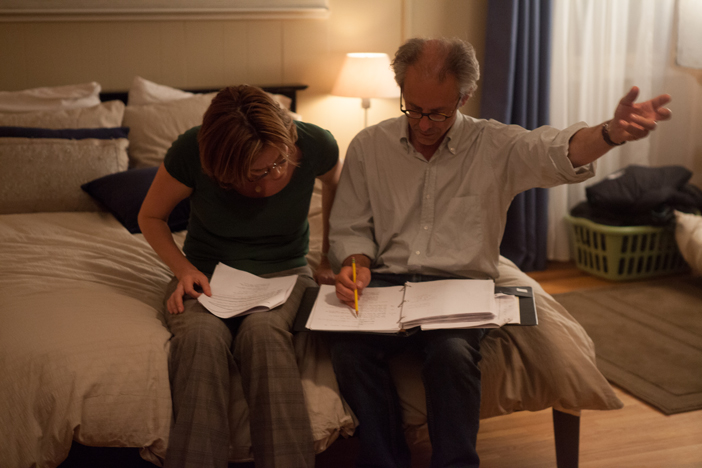 At the end of the day you have to tell a story that you care about. Many people will suggest that you make a genre film or something that is “more likely to make money.” But the fact is that none of these films are likely to make money! If you’re in it for money, please do something else. Because two or three years down the road when you’re working to rally your energies once again for postproduction, for film festivals, for marketing, for distribution, for social media – you’d better have selected a story that is still relevant to you. And that’s the point anyway, right?

As a storyteller, if you choose an issue that concerns or is personally important to you, there’s a fighting chance that others might relate to it as well. For example, I am a baby boomer. As a filmmaker, I had success with a film some years ago, but honestly it had been difficult for me to piece together another project. Let’s face it, the film industry thrives on youth and new talent. Sometimes a lot of capable and very talented people get passed over in the rush for the “flavor of the month.” So I set out to write about that.

In Finding Neighbors, “Sam Tucker” (Michael O’Keefe) is a graphic novelist who was at the forefront of his career, but more recently he’s hit a slump. He’s in a downward depressive spiral and the lack of any positive feedback only confirms his feelings of worthlessness and stagnation. This was part of the issue that concerned me. Would others relate to it? I wasn’t sure. But when I started sharing early versions of the script, so many people responded, “That’s me! I know that guy so well!” This response came from producers, writers, and craftspeople alike. I had hit pay dirt. So trust your instincts. 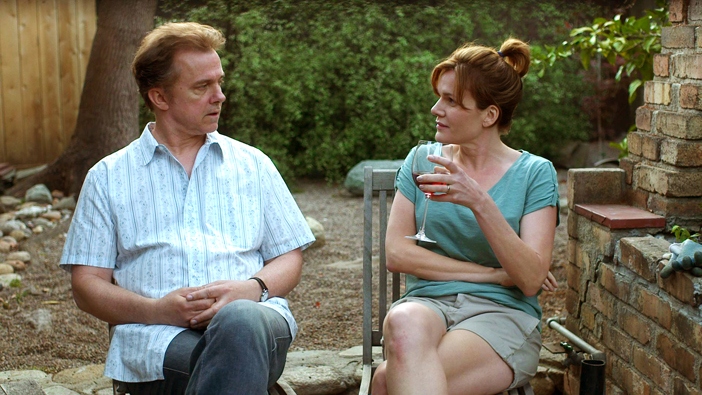 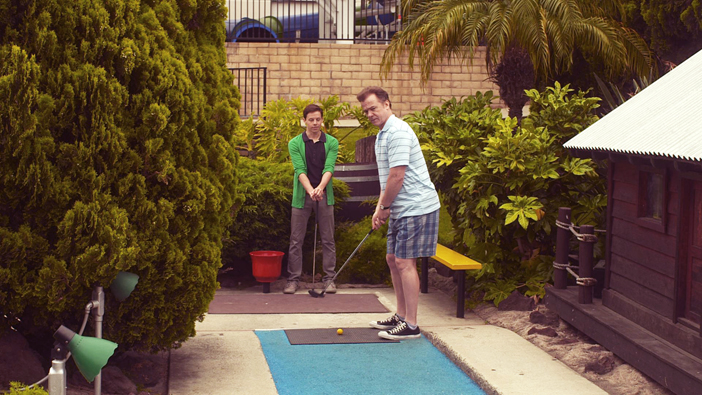 At a Q&A after a festival screening in Richmond, Virginia, a woman slowly stood up to say, “I was a painter, but years ago I put away my paints. Tonight when I go back home I’m getting the paints down from the attic and I’m going to start working again. Thank you for your movie!”

That one woman made this whole experience worthwhile.

I love a film set. I love that magic that occurs when the camera is rolling and a scene is unfolding, and what was only imagined on paper is now becoming “real.” So if you’ve wanted to make a film – and if you have a compelling story to tell – go do it.

Watch the trailer for Finding Neighbors: 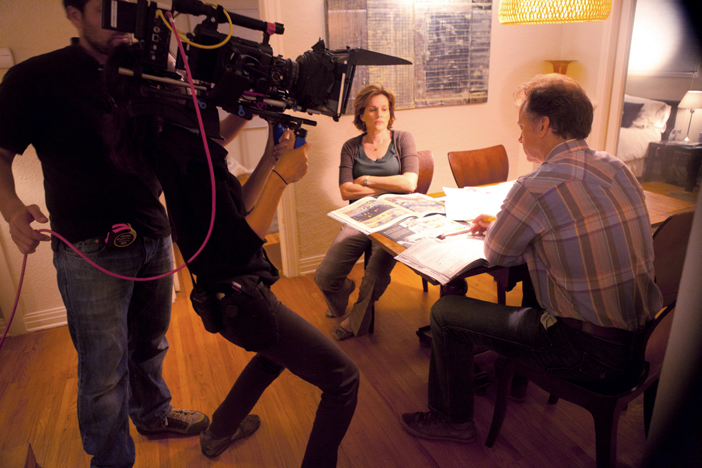 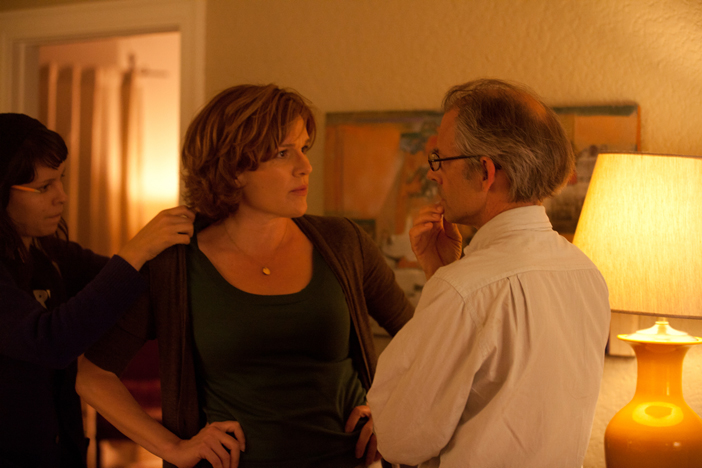 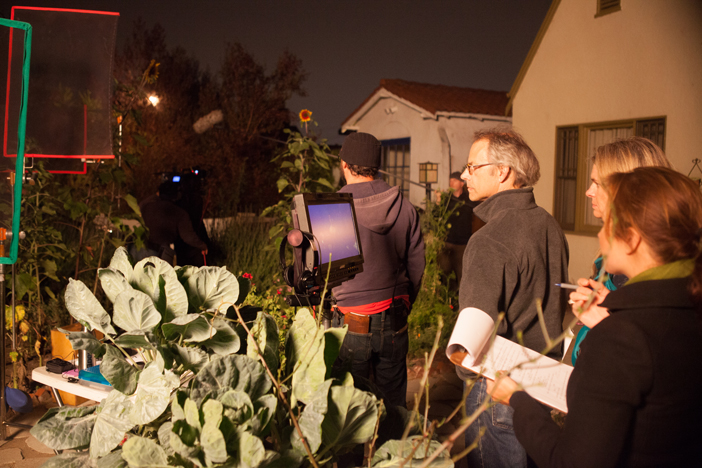 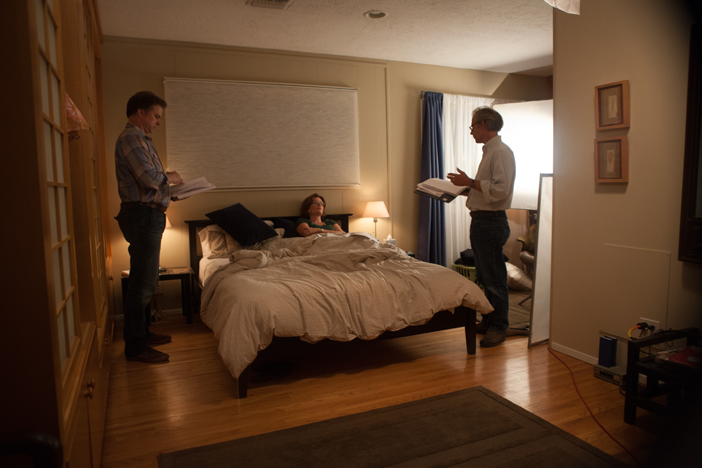 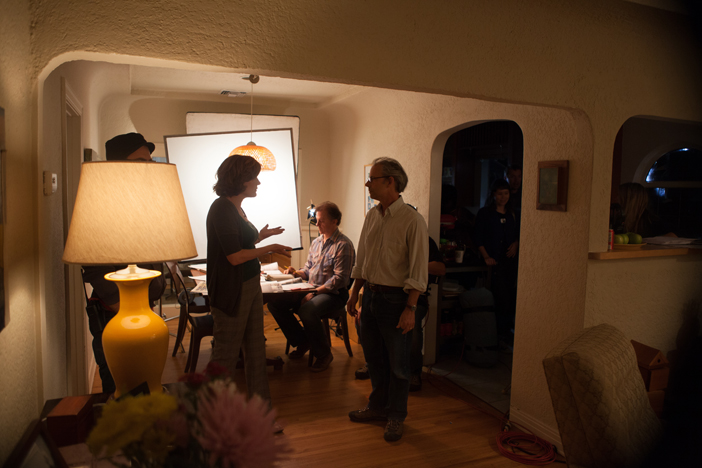 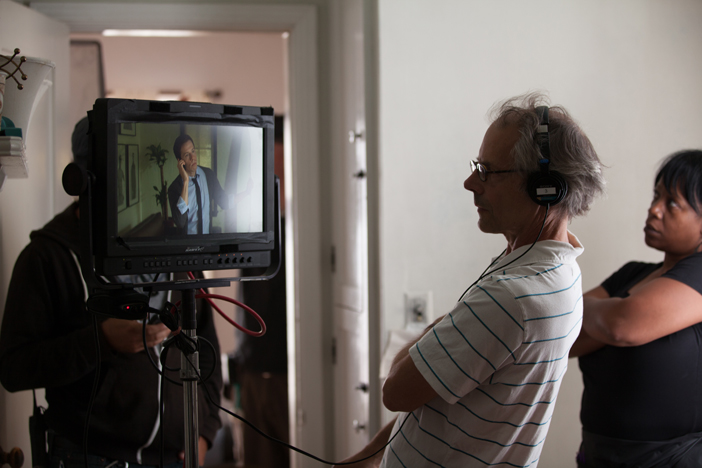 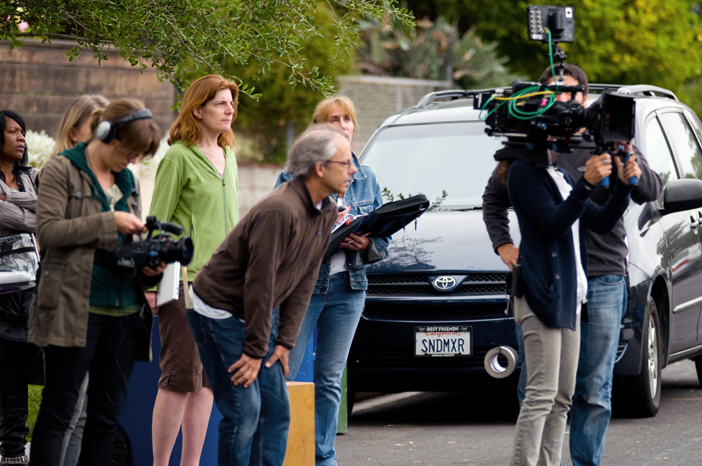