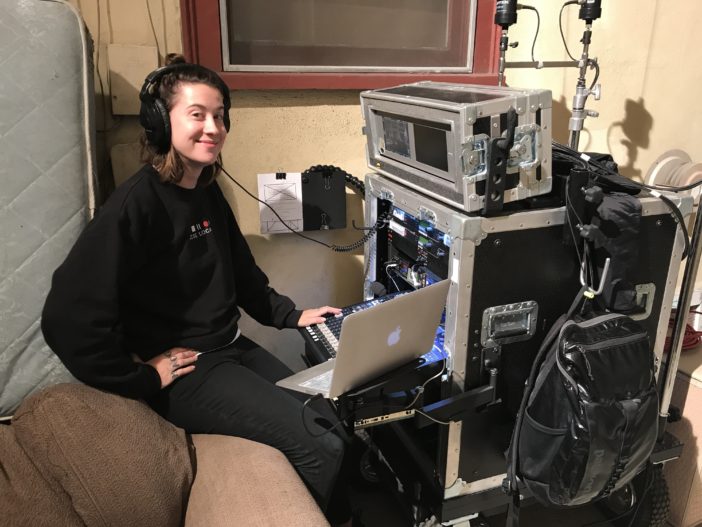 Amanda Beggs, CAS, found she had a knack for capturing audio after taking a sound class at Georgia’s Savannah College of Art & Design. It was there that she fell in love with a dream—a career in audio—which began when asked if she could mix on a fellow student’s short film a mere two days before production was set to begin.

“I one-hundred-percent lied,” she admits with a laugh. “I said it was going to be no problem. I downloaded every manual…. Basically faked it until I made it. I did this whole short film with literally zero prior experience at being a production sound mixer.”

She studied hard and learned quickly. Developing those technical skills in audio completely sidetracked her original plans for a degree in visual effects and thrust her into the highly competitive world of production sound mixing. 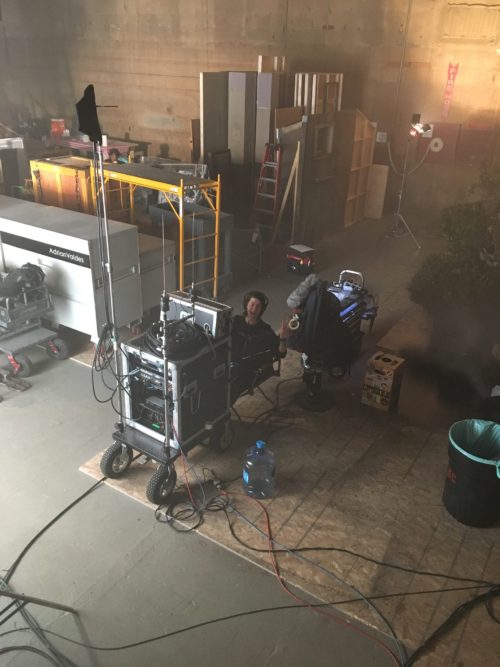 Amanda Beggs behind the scenes on the Amazon TV show ‘The Last Tycoon’. Photo by Zach Wrobel

“Being a production sound mixer was in high demand in college. I think I did over 80 student films in the 4 years I was there…mostly as a sound mixer, sometimes as a boom operator and different positions. By the time I left, I’d been on-set a lot! I definitely knew my way around (audio) equipment.” She adds, “I first learned on a Nagra and then transitioned to DAT, and then used Fostex PD6. My last year there, we got a Sound Devices 702. As soon as I found out, I wanted to get my hands on it and play with it. So I started with the 702, and then I got my hands on a Sound Devices 744T.”

After college, Beggs headed for Los Angeles with eager dreams of working on movies, but breaking into that tight-knit industry would prove more difficult than she first imagined.

“I had really crappy timing and came here with the writers’ strike,” she says with a grin. “So, things were definitely slower when I first moved here than they had been in previous years.” However, her technical know-how and experience with Sound Devices gear began to pay off almost immediately. “When I moved to Los Angeles, there were some older mixers that I ended up booming for who didn’t know the 744, because it was relatively new. Since I already knew it really well, I actually got a couple of gigs.”

“The 744T was actually the first ‘real’ piece of gear that I bought. I mean I had a boom pole and a mic, but I knew I needed a 744T. I had to have timecode. I had to have a recorder that would record to solid-state media, so I saved up my pennies, like a poor, sad 21-year-old, and bought a used 744 from Location Sound,” she says, laughing. “The 744 is so tiny and amazing.”

The 744T’s size and portability was a boon for Beggs who started out doing a lot of what she called ‘one-man banding’ on reality-style shoots for lower-budget, straight-to-DVD movies. She has since moved onto bigger ‘three-man team’ features, and she credits her ability to stay ‘ahead of the curve’ for much of her success.

“It’s such a tech-based job that you have to know the most recent equipment, so it just made sense for me…. That’s definitely what drew me to it (initially). And then, honestly, once I started playing with it, the 744 is user friendly. It made sense. It had everything—I never had any complaints with it…. For me, it just comes down to, what do I need the machine to do?”

Beggs still has her 744T recorder, paired with a Sound Devices 442 mixer, but over the years, she has added to her arsenal of audio gear with even more equipment from Sound Devices, such as a 788T-SSD audio system, including accessories: the CL-8 mixing control surface, the CL-9 linear fader controller, and CL-WiFi. “That to me was definitely a game-changer ’cause jumping from a 744 to having the 788 was incredible. I don’t know what I would change…. That machine’s incredible, and it afforded me the opportunity to get bigger and better jobs.” 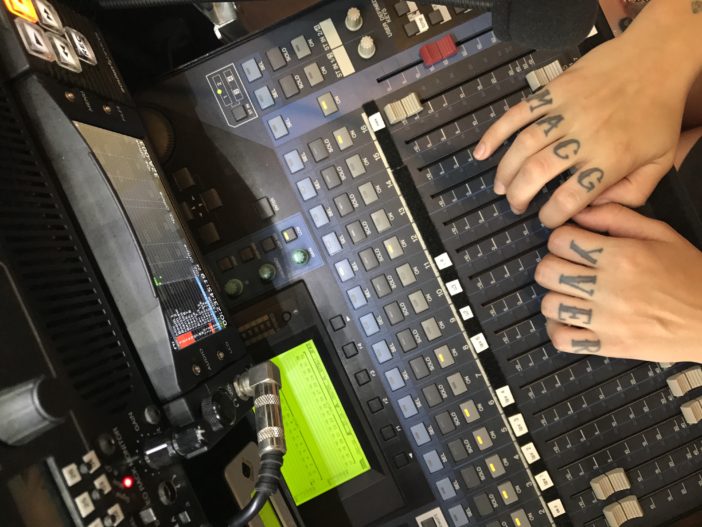 An admitted fan of the original MacGyver TV series, Amanda Beggs mixes tracks on the 970.

She uses her 7-Series recorders as “mobile rigs” on a small cart or for bag work, but nowadays on her big cart, she relies on the Sound Devices 970—a rack-mount, Dante-enabled audio recorder, capable of recording up to 64 tracks of audio.

“I wanted something that would be able to handle more tracks,” she said. “Now that I’m using a 970, it’s like, ‘Oh yeah! There’s way more options out there!’ I joke that the 970 is my dream machine.”

Beggs pairs her 970 with multiple Lectrosonics Venue modular receiver systems and a Yamaha O1V digital mixing console, and says she prefers to mix on it, especially when track count is a bigger factor in the production than portability.

“Any show where I want to have a bigger board, more channels, especially when you’re dealing with simultaneous playback, which has happened in a lot of the movies I’ve done,” she said. “There’ve been musical scenes and things like that, so it’s so nice not having to worry about when I have one more mic and I’m out of channels. Not on the 970! You’re not going to run out of tracks. I love it!” 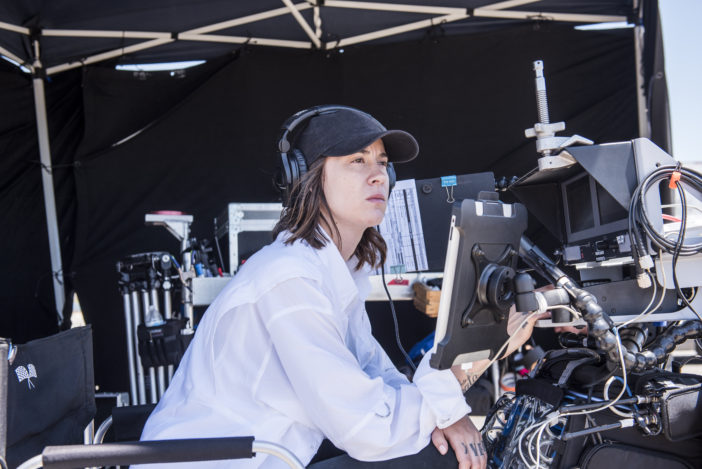 Since moving to California, Beggs became one of the youngest women to earn membership in the prestigious Cinema Audio Society, and has worked on numerous projects from independent films, such as Camp X-Ray with Kristen Stewart, to blockbusters, such as Star Trek Into Darkness, Star Trek Beyond, 20th Century Women, 10 Cloverfield Lane, and Star Wars: The Force Awakens.

“Star Wars is crazy to be a part of, to see Han Solo walk past you is pretty unreal, but at the end of the day, when I’m sitting at my cart and watching levels and mixing the hands-on faders, I just want to get the best possible sound. I don’t want to have to have an actor loop anything, whether it be on the world’s biggest movie that’s come out in the past decade or on an independent feature with a director who’s got this true artistic vision, and we’re fulfilling that.”

For some of the movies shot in multiple locations, like the Star Trek movies and 10 Cloverfield Lane, Beggs was responsible for recording audio for pickups once production moved back to Los Angeles for reshoots.

“I’m like the reshoot and pickup queen,” she jokes. “A lot of times these movies are shooting for six months, and it’s a lot of hard work, and you don’t want to come in (for reshoots) and have it not match. That defeats the purpose…. I’m really good at doing pickups—really good at seamlessly integrating with what another mixer has done.” 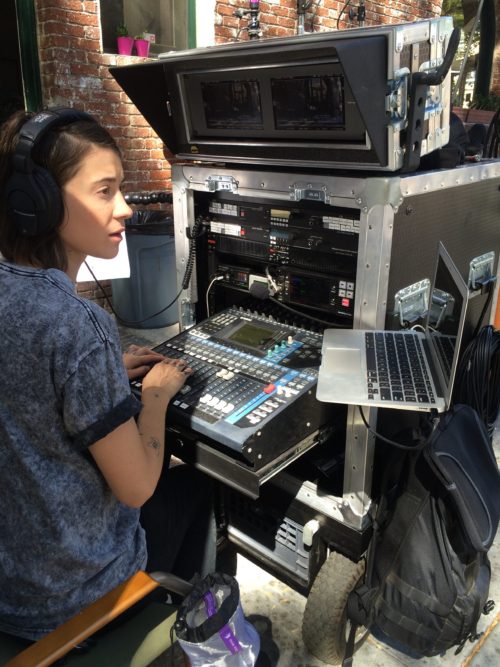 Amanda Beggs records audio with the 970 with PIXNet, on the set of ‘Lady Bird’. Photo by Jesse Kaplan.

“There’s a lot of trust in you, and I take that very seriously,” she adds. “I think of myself as an actor’s ally. We really are there to help tell the story through their performance, and if we’re not there to capture it, if we don’t have the right tools, or if the tools fail because it’s tech-based—I can’t tell an actor we missed the line because the battery died, or I didn’t hit record on the machine. You don’t want to be the person to have to say that, which is why I use the gear that I do because I trust it explicitly.”

“As a sound mixer, the gear you own is your calling card, so if I’m going to book a show, they’re going to expect me to show up with everything I’m gonna need to make it happen…. I wouldn’t have been able to get to the point I have had I not invested in all that stuff.”

“Nothing makes me happier than going home at the end of the day on a feature and knowing the actors gave these incredible performances and we nailed it….That’s what you live for.”

The Sound Devices, LLC, headquarters is located in Reedsburg, Wisconsin. Additional offices are located in Madison and Chicago. For more information, visit the Sound Devices and/or Video Devices websites: www.sounddevices.com and www.videodevices.com.