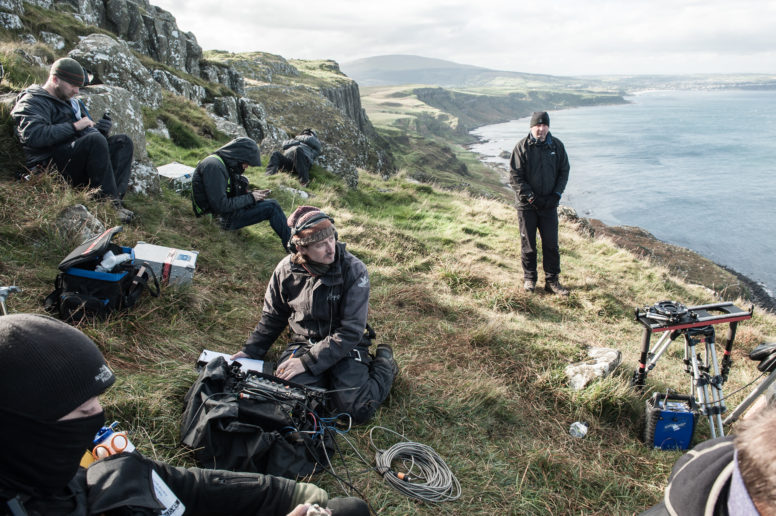 IT’S IN MY BLOOD

“My career in sound started when I was a child, working on occasion with my father, Patsy Hill, who was a freelance news cameraman. If there was a soft news story local to our home in Ballycastle on the North Antrim coast, I would hope to be involved. This is where I got my love for film…. Little did I know, that years later, I would revisit some of these picturesque locations as production sound mixer on Game of Thrones.”

Since the pilot for HBO’s ultra-successful and critically-acclaimed Game of Thrones, Hill has worked as the production sound mixer, seven seasons so far, and counting. In all that time, he has recorded hundreds of characters, but one character in particular is special.

“You might think that with over three hundred principle characters it would be difficult to choose a favorite. But one stands out beyond the rest. His name is Varys [played by actor Conleth Hill], and his voice has been familiar to me all my life as he is my brother. It is always a pleasure to listen to him at work!” 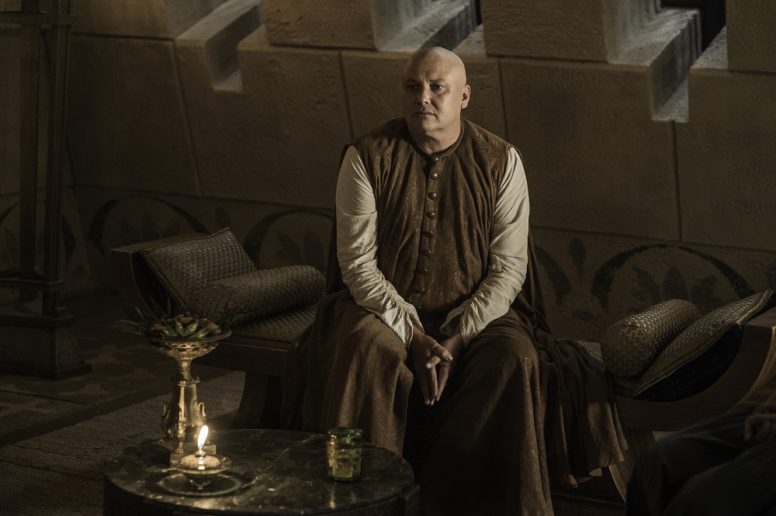 While choosing a favored character might be easy, after recording audio on at least sixty-seven episodes, Hill has a harder time picking just one that posed the biggest challenges.

“Each episode has its own way of testing your abilities. ‘Blackwater’ Season 2 was the first mammoth episode.  ‘The Rains of Castamere’ [The Red Wedding] Season 3, was dramatically charged. Then there was ‘The Watchers on the Wall’ and ‘The Children’, Season 4. Season 5 saw the successful entry of ‘Hardhome’, and Season 6 had ‘Battle of the Bastards’.”

About Battle of the Bastards (BoB), he adds, “I watched the episode at a crew screening in a Belfast cinema, and it was amazing. The post sound team did a fantastic job and brought every frame of the epic pictures to life.”

Three of those episodes—’Blackwater’, ‘Hardhome’, and ‘BoB’—earned Hill and the Game of Thrones audio team coveted Emmy awards for Outstanding Sound Mixing. 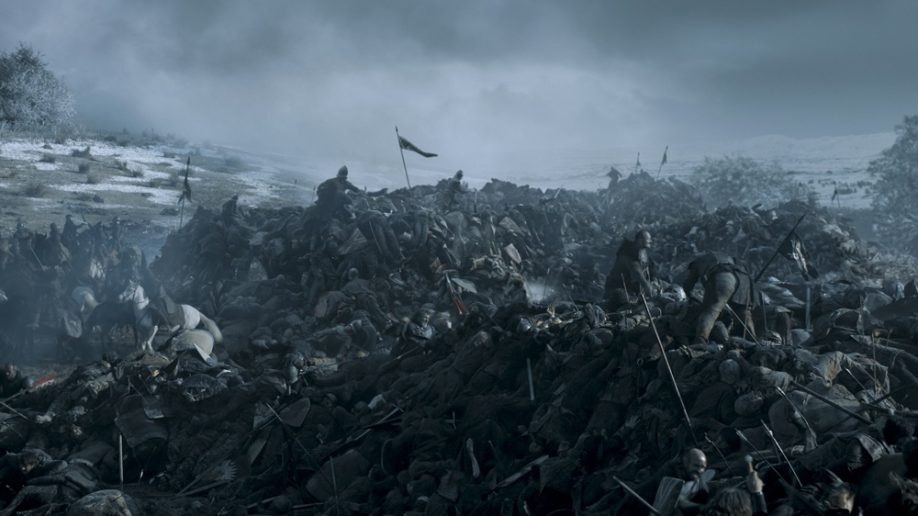 Battle scene from ‘Battle of the Bastards’, Season 6 (Photo: HBO)

“One great thing about Game of Thrones is the meticulous planning which goes into every episode,” Hill says. “‘Battle of the Bastards’ was a fine example of this with every sequence mapped out in advance. With a plan at hand, we prioritized characters with dialogue to radio mic and action to record with stereo effects.”

“For me, it’s never enough just to record the dialogue, and we try to record stereo effects in addition to a mono boom where possible, to get a real sense of drama. We also fitted mics to cameras on tracking crane arms and radio mic’d a few horses, placing the capsule on the girth to get clean horse hoof effects for the charge into battle.”

“In addition to boom and stereo mics, Jon Snow would have been radio mic’d with particular attention to mic capsule placement and transmitter placement. When you fit a radio mic to a person their body absorbs some of the signal. The fact that he is surrounded by a large compressed crowd makes getting a radio signal from his transmitter very difficult, but it is essential to record the integrity of the original performance.” 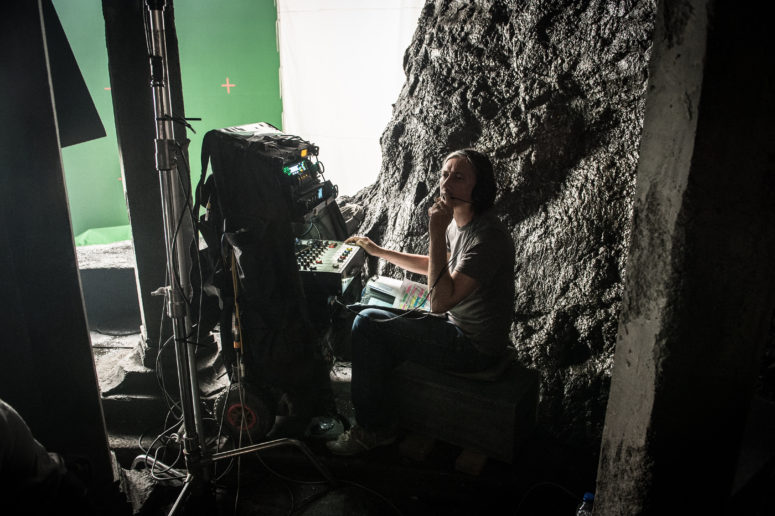 TOOLS OF THE TRADE

“At the heart of every setup is the Sound Devices 788T. I use one 788T SSD as my main recorder on the cart and a second for portable over the shoulder work. The 788T has proved extremely durable and reliable for the job…. I have replaced the Sound Devices 744T with a Sound Devices 688 as backup on the cart.” Hill adds, “The [newer]  688 is a lovely piece of kit. The menus are intuitive and it functions well. I use it to record a backup of the mix and ISOs from my Cooper 208 mixer, and it gives me greater flexibility with the track count.”

About his Cooper 208D, he says, “It sounds as good as ever and the only reason I can imagine changing it is for a desk with more channels.”

As one might expect for such a big production, Hill’s kit includes a large variety of mics paired with his Cooper and Sound Devices equipment. 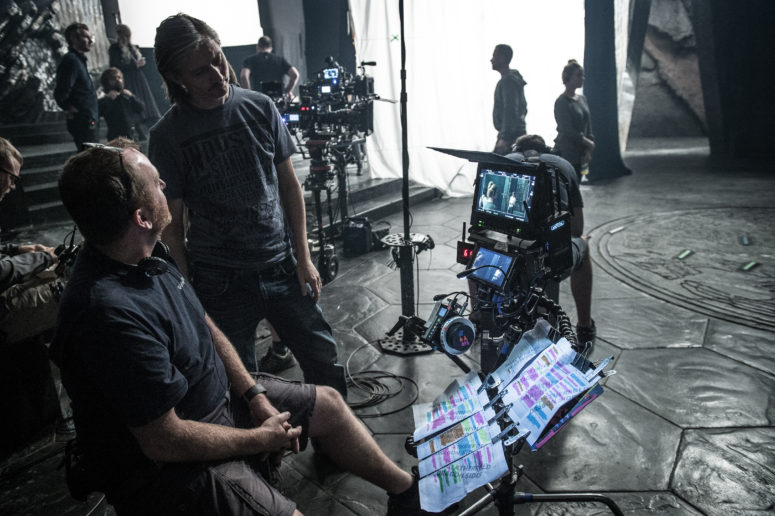 “I have used Audio Ltd 2040s since Season 1 and hope to start integrating their new digital radio mic systems on Season 8. An internal SD card recorder seems like a great belt and braces idea and encryption I imagine will become mandatory in the future.  I have three Sennheiser MKH 60s and an MKH 70, which I use for exteriors. For interiors, I have four MKH 50s. I also have two MKH 8050s and two MKH 8040s with all the accessories, which allow us to break them down and place them in areas too small for the 50s.

“For wireless headphone monitoring, I use the Sennheiser IEM 2050 transmitter and 2000 receivers which allow great flexibility. I don’t run a return for video playback to the mixer; instead, I provide a transmitter for video on an adjacent channel. By pressing one button on the IEM receiver it can be switched from ‘Sound’ to ‘Video’ depending on whether you want direct sound or playback.
It can also be utilized for two-zone use.”

“For Season 6, I purchased three of Rycote’s new Cyclone baskets and suspensions for the 60 to cope with the local weather. They sound more open than the old baskets and are proving to be an asset in our fight against the elements.” 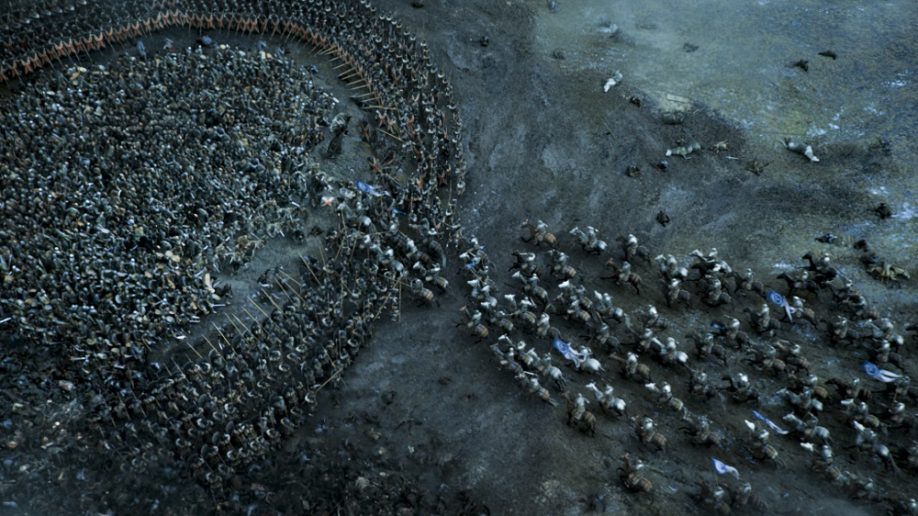 With such massive-scale battle scenes shot outdoors—something for which the series is well known—portability and the weather are challenges Hill faces every season.

“The battle scenes give you a sense of the scale of the battlefield and this huge area required a degree of flexibility,” Hill says about Season 6. “I tend to find the best plan is for the sound cart to be on the edge of the shot, as close to the action as possible. The sound cart is powered by lithium batteries which means it can be moved quickly to facilitate the setup when there is no handy corner to hide. A second Sound Devices 788T is rigged for run and gun situations or when the setup does not allow me to be cart-based. The Audio Ltd radio mics performed very well with good range using high gain Yagi antennas, and as you have the flexibility of using the 2040 transmitter as a body pack or with a phantom power lead as a radio boom, setups can be quickly changed.”

“Mud is part and parcel of Dragon Unit, and ‘Battle of the Bastards’ was no exception. The equipment was cleaned on a daily basis. My sound van was covered in mud from ‘BoB’ which dried and ended up on the floor of my garage. As I placed the last of it in the bin I wondered if I had missed a classic eBay opportunity!” 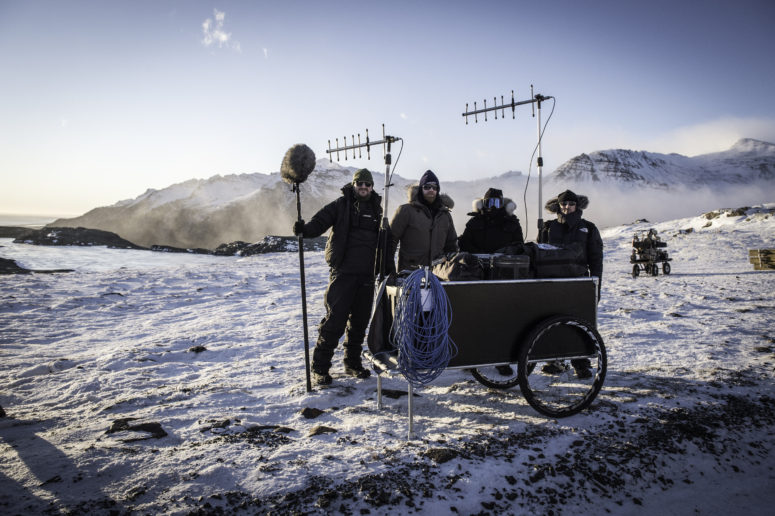 Season 7 took Hill and crew to Iceland for more extreme shooting on glaciers and mountain tops in the middle of winter.

“Most of the locations were remote, traveling in by four-wheel drive and then walking and pushing the rest. The weather was hostile with snow, rain, hail, high winds, and temperatures well below freezing. The first day we had gale force wind in excess of 60 mph and wind chill below -30C.”

“I had been to Iceland once before with the show, and you soon realize that it’s not suitable for a cart based system. [So] I had a Polar Bag made for the 788T by KT systems in the UK. The bag was thermally lined and had arm holes and a clear cover to allow mixing in any conditions. It also had space for two Audio Ltd. RK3 racks with seven 2040 radio mic receivers for the seven cast who were wired every day.”

“When you are traveling for hours to a location facing the worst of the weather and temperature and having only a few hours daylight to shoot, you need to be able to rely on your equipment. With my experience over the years, I have total faith in Sound Devices.”

Behind the Scenes in Iceland for Season 7 (Photos: Helen Sloan – HBO): 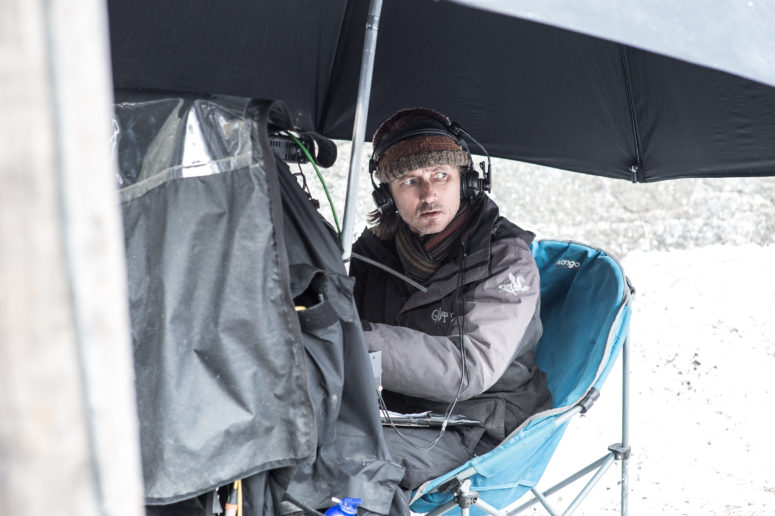 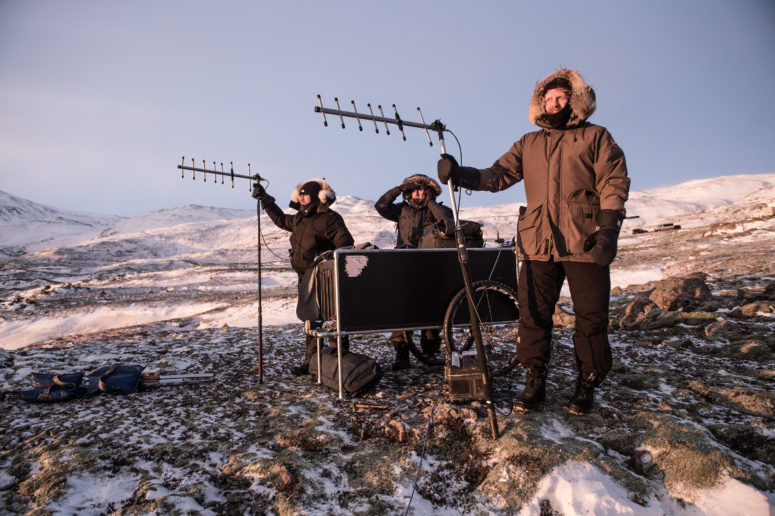 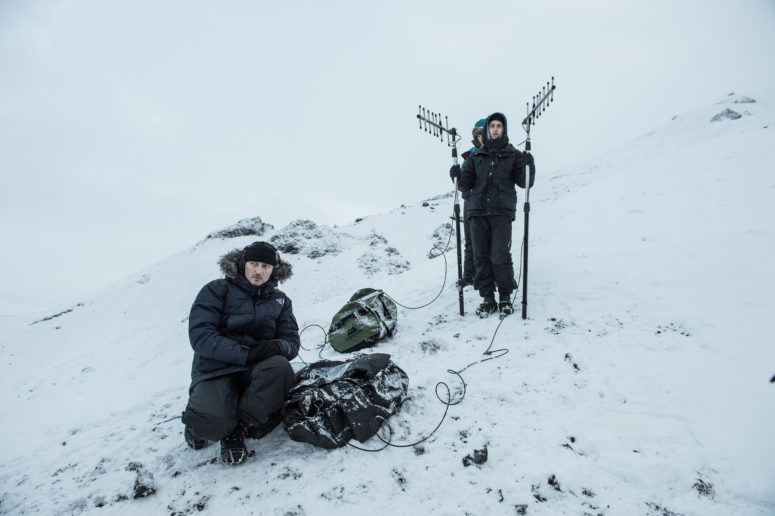 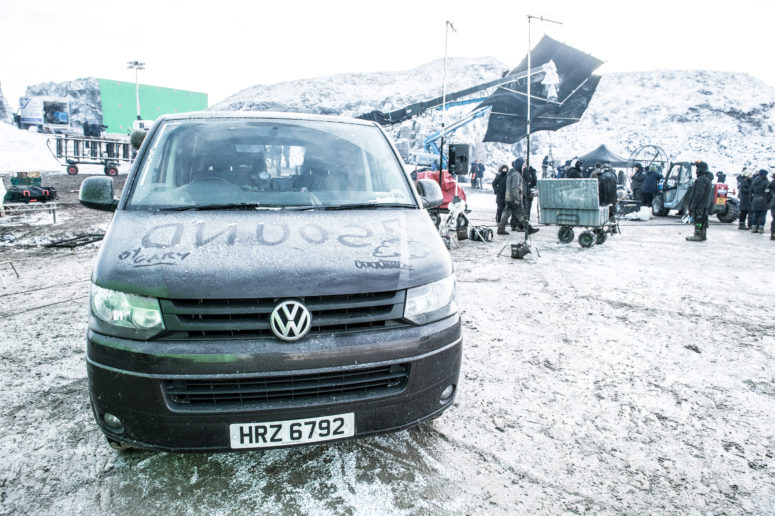 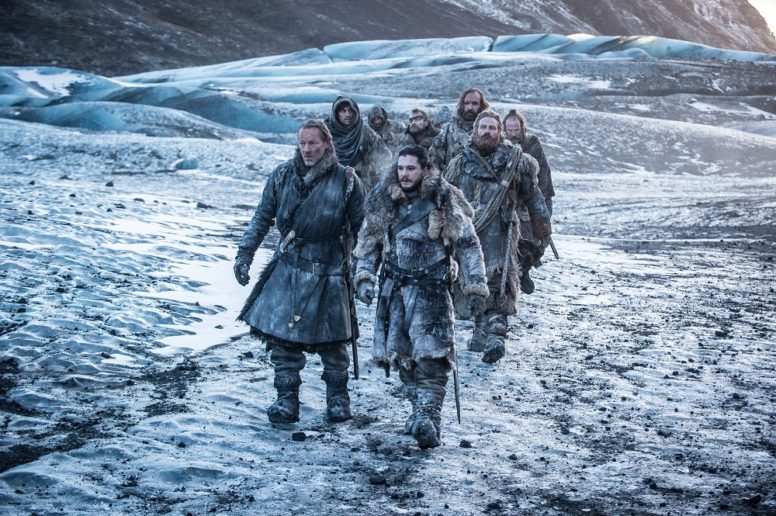 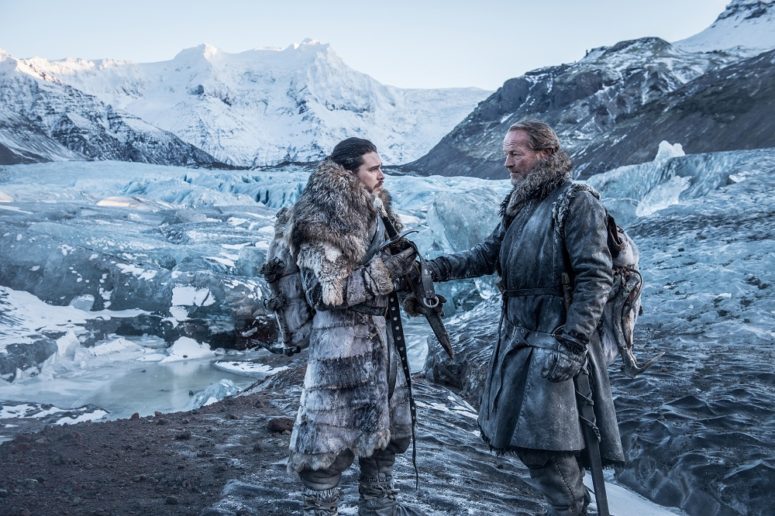 Ronan Hill on location in Iceland: 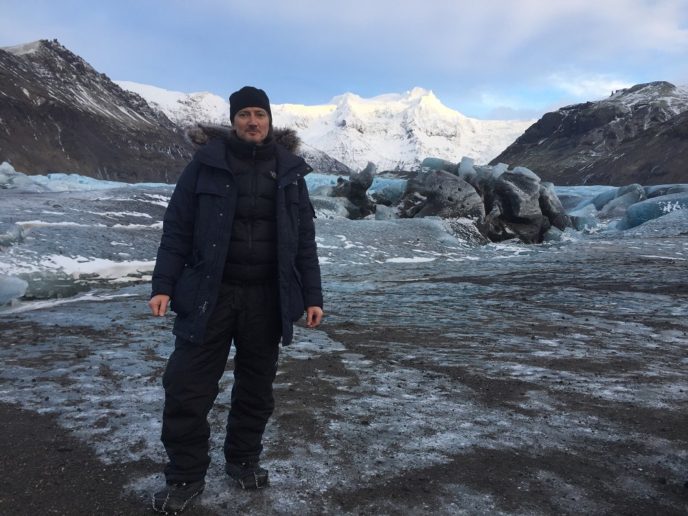