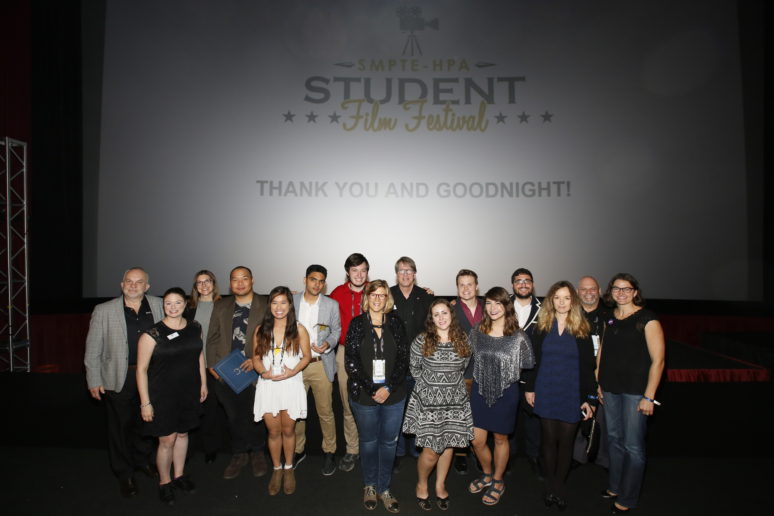 Los Angeles, CA — SMPTE®, the organization whose standards have supported a century of technological advances in entertainment technology and whose membership spans the globe, and the Hollywood Professional Association (HPA), the organization serving the professional media creation and finishing community, have announced the winners of the third annual SMPTE-HPA Student Film Festival.

Held on Monday, Oct. 23, at the TCL Chinese 6 Theatres in Hollywood, California, in conjunction with the SMPTE 2017 Annual Technical Conference & Exhibition (SMPTE 2017), the film festival showcased submissions demonstrating creative uses of technology in storytelling. SMPTE and the HPA received 119 submissions from more than 30 countries, and the 17 official selections screened during SMPTE 2017 represented Germany, Hong Kong, the U.K., and the U.S.

The event was hosted by Howard Lukk, SMPTE director of engineering and standards, who is also a film director, and by Aimée Ricca, SMPTE marketing and communication, who previously worked in cinema. The official selections at the festival were screened in SMPTE-DCP format, courtesy of Sundog Media Toolkit. Eight films earned awards in the following categories:

Innovative Use of Technology in an Experimental Short

Innovative Use of Analog Technologies in a Live Action Narrative Short

Documentary Short With Technology as the Subject Matter

The student filmmakers behind the winning selections received awards for their work, as well as prizes courtesy of Avid, Blackmagic Design, Other World Computing, and Sundog Media Toolkit. Filmmaker information is available at http://www.smpte2017.org/student-film.html.

“The art and craft of filmmaking demands an ever-growing ease with technology that changes at lightning fast speeds. This year’s outstanding submissions demonstrate impressive facility with these tools in the service of the filmmakers’ artistic endeavors,” said Seth Hallen, President of HPA. “Storytelling is the goal, not the technology, and it is inspiring to see how these talented young filmmakers have marshaled the tools to tell the stories they are interested in telling. The HPA is proud to support this festival, and congratulates this group of talented filmmakers!”

The jurors for this year’s festival featured a diverse group of accomplished professionals from around the world. They included Elisa Bonora, ACE, an editor and producer whose credits include multiple Emmy®-nominated documentaries; Christina Capra, a director and producer of  virtual reality (VR) content; David Creed, an award-winning short-filmmaker; Andrea Dimity, a film producer and literary manager; David Ginsberg, a postproduction technology consultant; Tim Heindl, senior vice president of research at Sony Pictures; Katie Hinsen, a digital intermediate artist and founder of the Blue Collar Post Collective (BCPC); and Niven Howie, ACE, editor of commercials, pop videos including Sting’s “Ten Summoner’s Tales” and XTC’s “Dear God,” and the features “Dawn of the Dead” (2004) and “The Hitchhikers Guide to the Galaxy” (2005).

SMPTE 2017 is the premier annual event for motion-imaging and media technology, production, operations, and the allied arts and sciences. This is the third year that SMPTE and the HPA have hosted a student film festival in conjunction with SMPTE 2017.

More information about the film festival is available at http://smpte2017.org/student-film.html.

About the Hollywood Professional Association
Hollywood Professional Association (HPA) serves the professional community of businesses and individuals who provide expertise, support, tools, and the infrastructure for the creation and finishing of motion pictures, television, commercials, digital media, and other dynamic media content. Through its partnership with the Society of Motion Picture and Television Engineers® (SMPTE®), the leader in the advancement of the art, science, and craft of the image, sound, and metadata ecosystem, the HPA continues to extend its support of the community it represents. Information about the HPA is available at www.hpaonline.com.

About SMPTE
For more than a century, the people of the Society of Motion Picture and Television Engineers® (SMPTE®, pronounced “simp-tee”) have sorted out the details of many significant advances in media and entertainment technology, from the introduction of “talkies” and color television to HD and UHD (4K, 8K) TV. Since its founding in 1916, SMPTE has received an Oscar® and multiple Emmy® Awards for its work in advancing moving-imagery engineering across the industry. SMPTE has developed thousands of standards, recommended practices, and engineering guidelines, more than 800 of which are currently in force today. SMPTE Time Code™ and the ubiquitous SMPTE Color Bars™ are just two examples of SMPTE’s notable work. As it enters its second century, SMPTE is shaping the next generation of standards and providing education for the industry to ensure interoperability as the industry evolves further into IT- and IP-based workflows.

SMPTE’s global membership today includes more than 7,000 members: motion-imaging executives, creatives, technologists, researchers, and students who volunteer their time and expertise to SMPTE’s standards development and educational initiatives. A partnership with the Hollywood Professional Association (HPA) connects SMPTE and its membership with the businesses and individuals who support the creation and finishing of media content. Information on joining SMPTE is available at www.smpte.org/join.