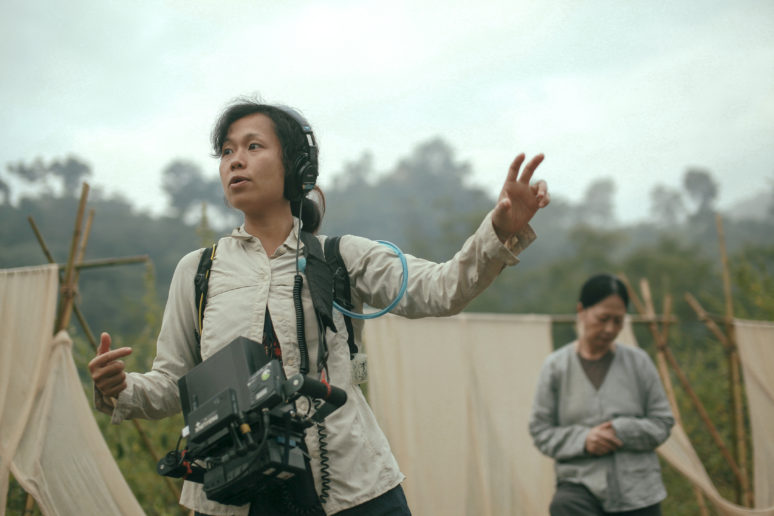 After a five-year odyssey, The Third Wife, a period drama written, directed and produced by Ash Mayfair, had its World Premiere at the 43rd Toronto International Film Festival. Inspired by Mayfair’s own family history, the film revolves around Mây, a 14-year old girl who becomes the third wife of a wealthy landowner in 19th century rural Vietnam. “I went to NYU Tisch for filmmaking and we made a lot of shorts there. This would not be possible without a film school education and support of mentors and teachers,” Mayfair explains. The script won the Spike Lee Film Production Award in 2014, which led to securing production money from Hong Kong, America, and Vietnam. “Previous to NYU I didn’t know if the story was going to be an opera, play, or a novel. At school I was encouraged to turn this into a screenplay, which I did. The first draft was completed a year after I finished grad school and it took me three years to get to the final stage.” 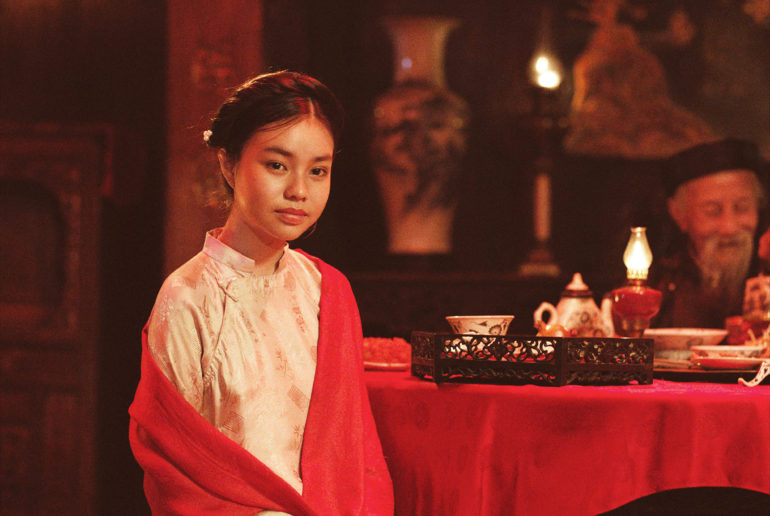 Nguyễn Phương Trà My stars as Mây in ‘The Third Wife’

Principal photography took place entirely in Vietnam. “Right now the Vietnamese film industry is booming, so there’s a lot of interest in creating movies,” notes Mayfair. “I was fortunate because people are still supportive of art house movies and would donate a lot of time and effort for low rates because they loved the story.” The script was altered because of personal research. “I didn’t intentionally set out to write minimal dialogue but when I went and lived in villages and places this kind of family would be living, it turned out to be quieter and had a much slower pace.” Rewriting continued during the pre-production period. “When we started rehearsals, so much of the script evolved into something else through improvisation and character studies with the cast.” 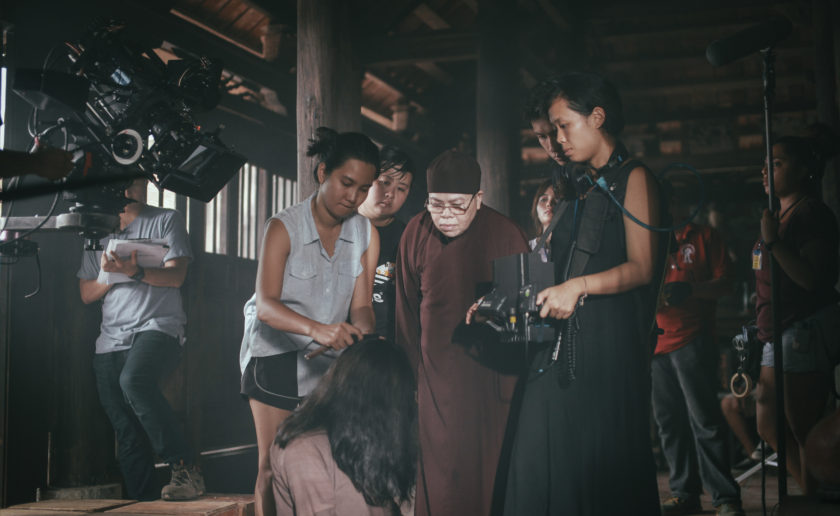 Behind the scenes of ‘The Third Wife’

Mayfair’s classmate from NYU Tisch served as the cinematographer. “Chananun Chotrungroj is my best friend and was instrumental in developing the film right from the beginning. We watched a lot of movies to see how landscapes were shot and for lighting references, and looked at several watercolor and folk paintings from Vietnamese history. Chananun and I agreed that each frame should feel like a watercolor and have as much natural light as possible.” Chotrungroj captured the footage on the ARRI ALEXA XT. “There was only one camera because that’s what we could afford!” laughs Mayfair. “The aspect ratio of this movie is unique. I had wanted 1.85:1 in the beginning, but my cinematographer decided we would shoot full frame on the ALEXA so it’s 1.66:1.  My colorist opened up the frame and without knowing, we had created the aspect ratio that was absolutely perfect for the painterly approach that we were looking for!” 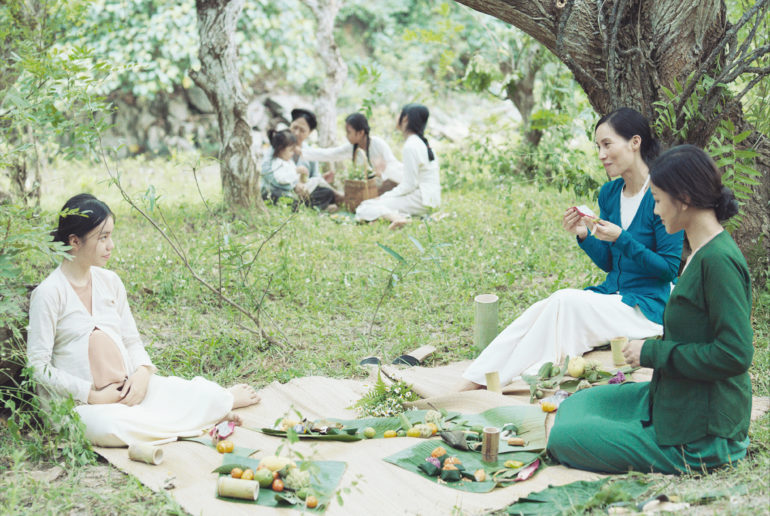 The film’s camera movement reflects the natural tempo of life. “During my research, when I saw how people on these estates were moving, the flow of water, and the way the sun hit a particular slope of the mountain at sunrise and sunset, it all had a particular tempo,” recalls Mayfair. “I was adamant about bringing this rhythm to the camera. I wanted the movie to feel like a woman.” A color scheme was designed for each character to reflect their philosophy and background. “Mây was so difficult to find. I saw over 900 girls from the ages of 11 to 14. When I found Nguyễn Phương Trà My, it brought me to tears. She was 12 at the time and we had long conversations with her entire family. I was reluctant to offer her the part because she was so young, but Nguyễn fought for it. She assured her family. Because of that passion, I trusted her, and we were rewarded for it.” 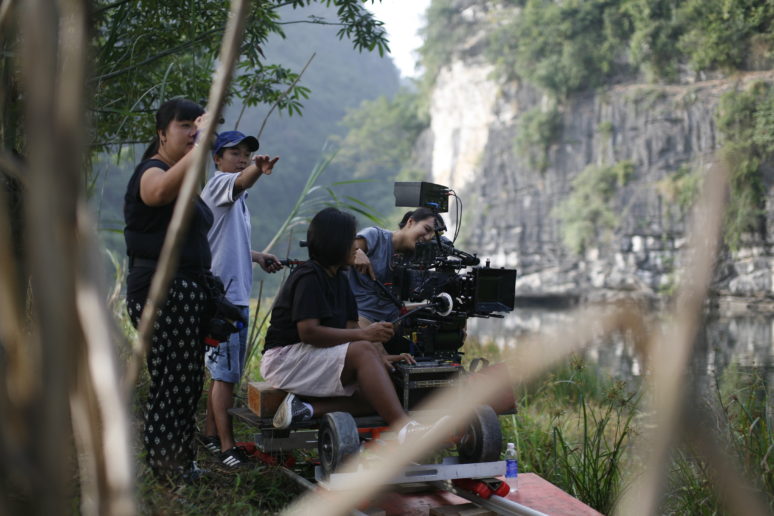 Behind the scenes of ‘The Third Wife’

Mother Nature was not entirely agreeable. “We had secured a very good location eight months before principal photography,” state Mayfair. “Then four months later, a storm rolled in and flattened it completely. We panicked, went all over the north of Vietnam to find somewhere to shoot, and stumbled across these ruined estates that had some of the old architecture structures preserved, which we fixed up and shot.” Rehearsals were held in the manor house featured in the movie. “I was fortunate to have had access to the location for a month and a half before principal photography, so we did a lot of characterization and improv there with the actors wearing temporary costumes.” Storyboards were used as a starting point. “Due to the improvisation that we did, a lot of scenes are not in the script and also not on the screen. We functioned like an actual family would from morning to night for several weeks. Some of it we would record or make notes on or make improvements on. Some scenes we changed and the camera angle would alter accordingly.” 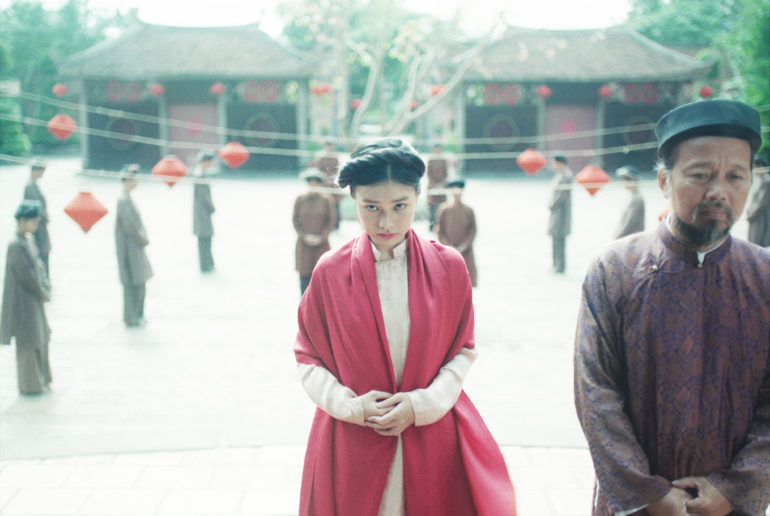 Child brides are considered by many to be a taboo subject matter. “When I wrote the script, I was completely aware that this would be a situation and was so sensitive by the nature of casting someone so young,” explains Mayfair. “I decided right from the beginning that honesty and candor is the only approach. During casting, rehearsals, and shooting, I would have to be completely open with everybody. The view of the camera is tied into her perspective, so we managed to balance that well. It doesn’t lapse into voyeurism, but instead it was able to expression emotionally how this young girl would feel in this situation.” Editor Julie Béziau joined the project after principal photography was completed. “Julie is amazing and had read the script several times and understood the pacing from the get-go. What was challenging was the selection because we had an enormous amount of improvised work resulting from a large cast and having numerous scenes that eventually had to be pared down.” 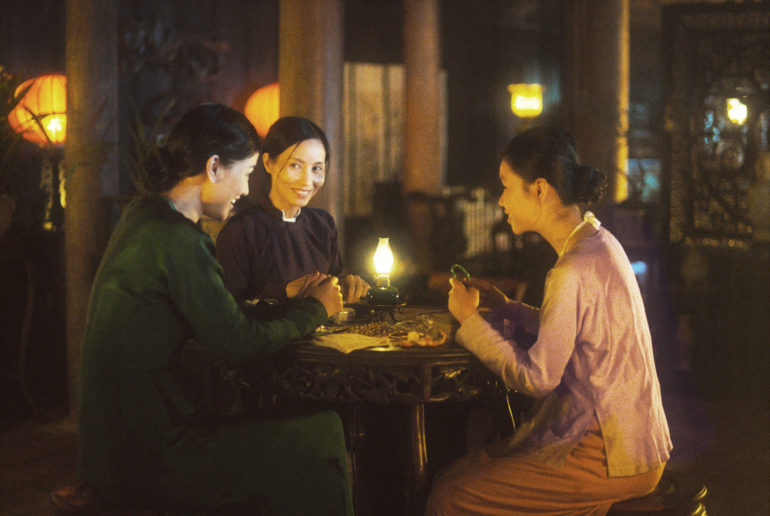 Sound design was extremely difficult. “My sound designer Edouard Morin is French. It was challenging for him to get the right atmospheric feeling of the landscape, which is a character in the film.” A breakthrough happened when Morin and composer Ton That An spent time on set in Vietnam. “A lot of the sound was designed but recorded on set. Some of ideas were already in the script because they had symbolic meanings, like the cry of a crow during a wedding night and during the loss of the baby later. We would go, find the animal, and record that. We would go to a specific region in Vietnam to get the right cicadas or right movement of the bamboo to record.” The DI enriched the in-camera color palette. “We wanted something smoky, dreamy, foggy, and were able to enhance that.” 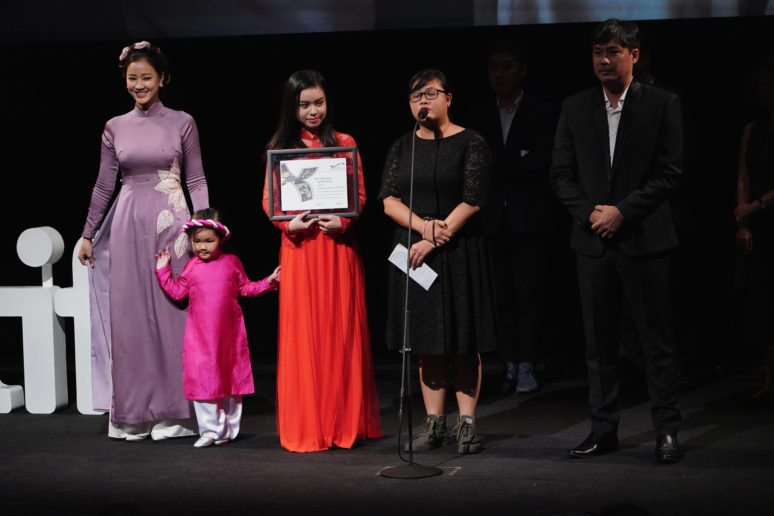 “Making a movie is like mountaineering,” notes Mayfair. “You put your head down, put one foot after another, and five years later you have something. The biggest challenge was training myself to have the patience to wait for however long it took to get this movie done.” The Third Wife won the NETPAC Award at the Toronto International Film Festival. “During the first public premiere of the film when the lights came on, I started bawling because the journey has been so long and thousands of manhours not just of my own, but of so many people. It has also been such a long time that I’ve seen a Vietnamese movie on the big screen in a major international film festival. It was an extremely touching experience but also reminded me that each millisecond on the screen is a mountain of work.”

The Third Wife arrives in theatres on May 15, 2019. Click here to learn more.