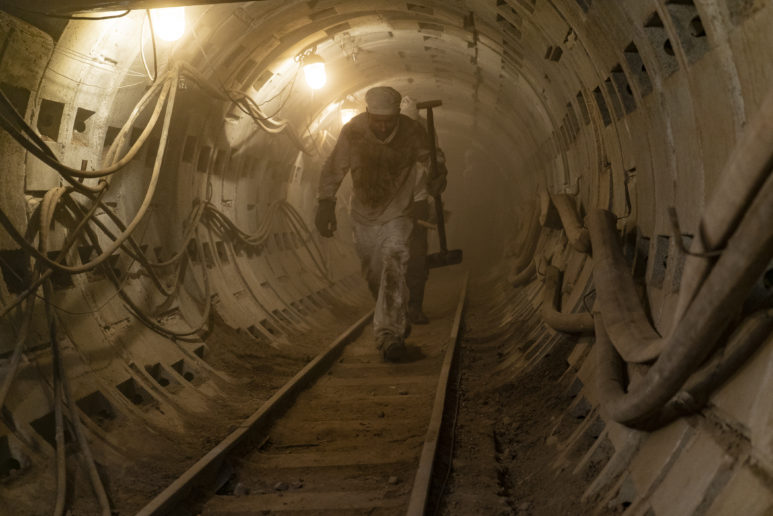 Inspiration is all around for those who know how to look… or listen. But who knew that a nuclear reactor could be a source of both inspiration and instrumentation? Before starting the score on HBO’s Chernobyl miniseries, award-winning composer Hildur Guðnadóttir decided to visit the decommissioned Lithuania power plant where the show was to be filmed, in order to discover the space’s character and tone. She was joined by field recordist Chris Watson, whose recordings there became the raw material for Guðnadóttir’s musique concrète approach to the score.

Here, Berlin-based Guðnadóttir discusses her Emmy-nominated score on Chernobyl’s Episode 2, “Please Remain Calm,” and how she turned recordings of a nuclear power plant into music. She talks about creating a score that has a connection to spatial reality and also communicates the unseen danger of radiation while still retaining a human element. 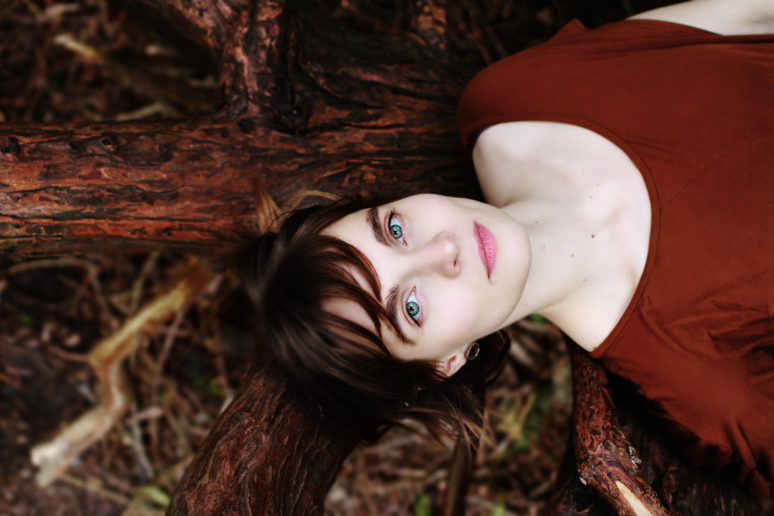 S&P: What were series creator Craig Mazin and director Johan Renck’s thoughts on the score for Chernobyl? What was the emotional tone they wanted the music to establish or support?

Hildur Guðnadóttir (HG):  Johan wanted some sort of retro-futuristic/sci-fi element to the music.

What was clear to me from the beginning was that because the story was based on very real events — and a lot of people’s lives were affected by what happened there — I thought it was really important that the music was also based on reality and had a connection to spatial reality. The character of the radiation and the power plant, it was very important that those would have a strong musical connection because you can’t portray those elements visually. It’s an invisible, oppressive danger and fear. It was important that it was real and that it had a connection to the actual space and actual reality. I went out of my way to go there and capture sounds to bring into the score, to use musical elements for the radiation.

I started talking about that very early on and Craig and Johan were very much in agreement. They felt it was a very exciting way to go about it. We had a similar direction from the beginning on the score.

S&P:  Once you knew the direction that the showrunners wanted the music to take, did you start thinking about instrumentation, either electronic or organic? Or did you want to hear the power plant before you started to imagine what this score might sound like?

HG:  It was a really important part of the process to go there and listen before I started to imagine what the instrumentation could be. I really needed to feel what it felt like to be in the space. I needed to feel what it sounded like. I wanted that to determine which direction the score would go. Luckily, talks about the score happened early on, before they even started filming in the space. I was able to go there and record, so we formed a musical direction much earlier in the process than I’d done on other projects. It’s quite common, especially when working in TV, that the score comes in quite late. You don’t have a lot of time to work on the music. But in this case, I was working on the music for about six or seven months altogether. 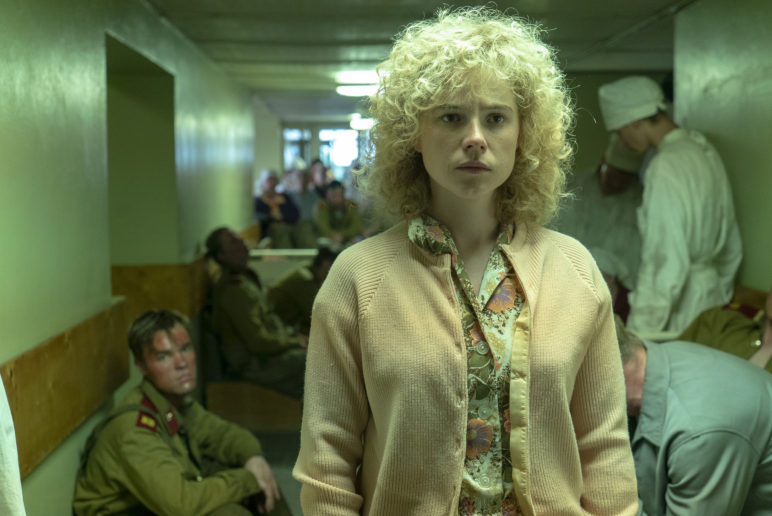 S&P:  Can you tell me about your recording trip to Lithuania’s decommissioned power plant with field recordist Chris Watson? What did you record there?

HG:  Chris is a wonderful person to peel open your ears. He’s been all over the world with David Attenborough and has recorded sounds for Attenborough’s series like Frozen Planet and The Life of Mammals. He’s wonderfully curious and excited about sound. He’s a great companion to have when you’re trying to have your ears extra open. It was a really fun process.

We were joined by score producer Sam Slater, who is equally enthusiastic about capturing crazy sounds. So it was a very fun and explorative process. For me, when creating something, I feel that if you start from a place of curiosity then it always leads you to places that you couldn’t imagine if you remain curious enough to outside elements. That was definitely the case with this recording process.

That curiosity remained in the months that followed, working through all of this material and creating music from this audio that we captured. ‘Curiosity’ and ‘open ears’ were the keywords to go by.

S&P:  How, specifically, did you turn those field recordings into music? Most sounds are atonal, so how did you get them to sound like a musical score?

HG:  I went about it in a variety of ways but one consideration was that Johan was keen on having this retro-futuristic/sci-fi twist to the score so it was pretty clear that the processes had to be done with old analog outboard equipment and effects. So I did a lot of tape manipulation, slowing sounds down. For instance, if there were sounds that were almost out of the range of human hearing those had to be slowed down or pitched down and most often that was done with tape.

I also used all sorts of space echoes and modular effects. Those were the outboard processing.

Then I turned these sounds into material that could be worked with through samplers if they needed to be played in a musical way. For example, if I needed any chords or melodies I often forced the sounds into those directions with samplers.

I also had impulse responses from spaces inside the plant, like the Turbine Hall, the Pump Room, and the Reactor Hall. I used those reverbs on my vocals, which added the human element to the score. It’s the only classical musical instrument in the score. I would use the reverbs from these spaces on my voice and the spaces would color my musical performances as well.

There are two or three big musical cues in each episode. For example, we have the “Bridge of Death” track, “Evacuation,” and “Vichnaya Pamyat” (the burial song that’s sung at the graves). These are big musical moments where vocals play a pronounced role. Those moments are arranged musically, more like choir pieces.

I used my voice as a tool to access the raw human emotions through melodies, to express grief, sorrow, and pathos.

For “Vichnaya Pamyat,” that’s a traditional Ukrainian funeral song. They sing it whenever anyone dies in Ukraine or Russia. It’s a traditional way to say good-bye to their deceased. That was a Ukrainian male choir that we recorded in the Ukraine. I did an arrangement of the song and then we went back to record it in the Ukraine because that song has a very strong connection for people in this culture. They know how to sing it. I can try to make sense of the melody but I think the real feeling of it had to come from people that know it. 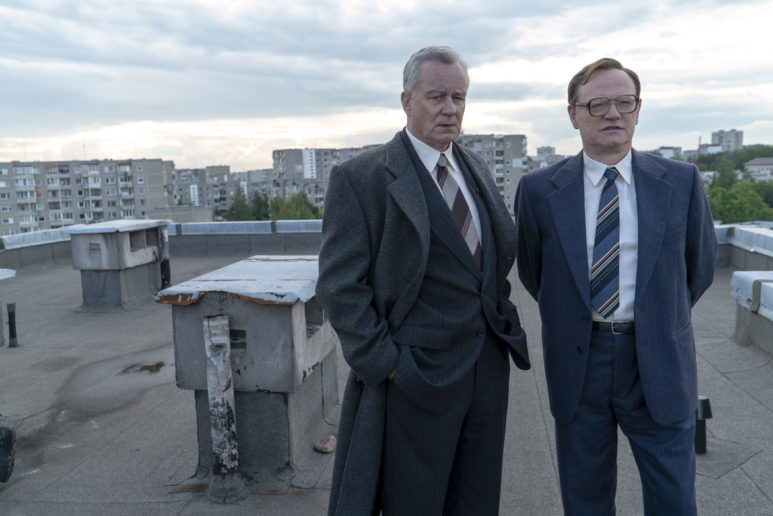 S&P:  You started work on the score while the series was being shot. Can you tell me about that process? 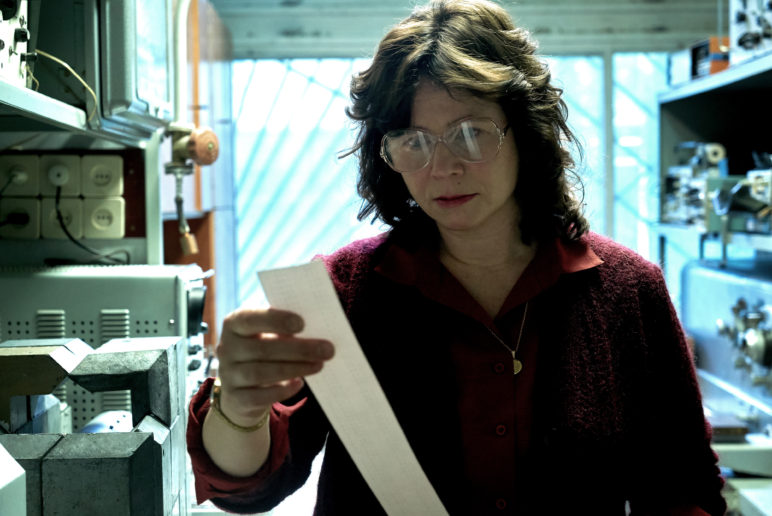 S&P:  After seeing the final cut of the show, did you tweak or edit the cues?

HG:   Yes, that’s when the real work started to happen! We had quite a lot of back and forth as we started work to picture. We had spent so long gathering sounds and creating the tone because this was such a strong sound world that we were in. It took a while to find the ground within that world and find the right sounds that fit. When we started to work to picture, that’s when the real sculpting began. That’s where everything turned properly musical and was sculpted to the picture.

The first two episodes in particular there were months of back and forth, tweaking and re-composing. We had quite a long dialogue about that. 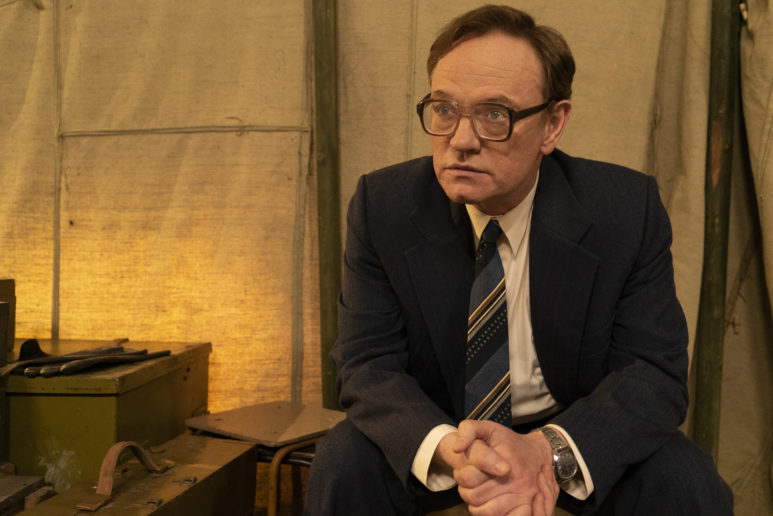 S&P:  Were you able to collaborate with the post sound team as well? As they were coming up with the sound design and effects, were you able to hear that and work your music around it? Or vice versa?

HG:  Yes, and I had sent on the recordings that we made at the power plant and I believe they used some of the raw recordings in their sound design as well. 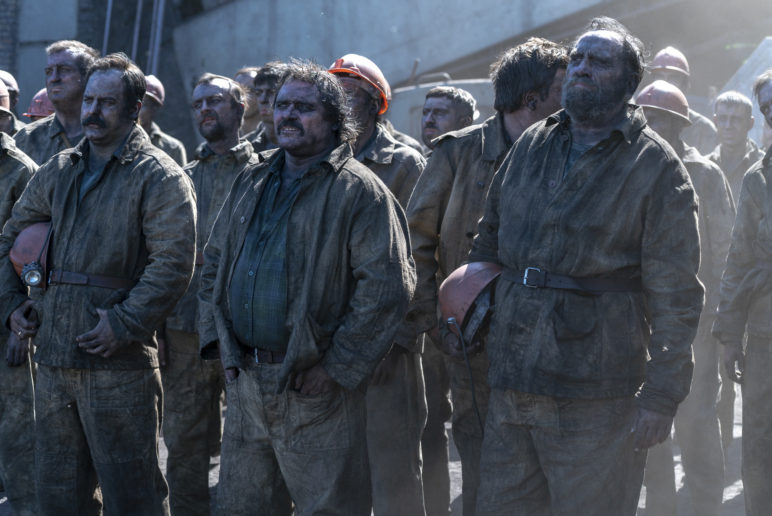 S&P:  Looking at Episode 2 “Please Remain Calm,” why did you choose this episode for Emmy consideration for its score?

HG:  I had to choose one and it was a tough choice. I originally chose Episode 1 but there were some mixes that weren’t quite right for me. So I went with the next episode because the music mixes worked out a bit better for me musically.

Episode 2 had musical moments that I liked, but I picked it because I had to pick one. 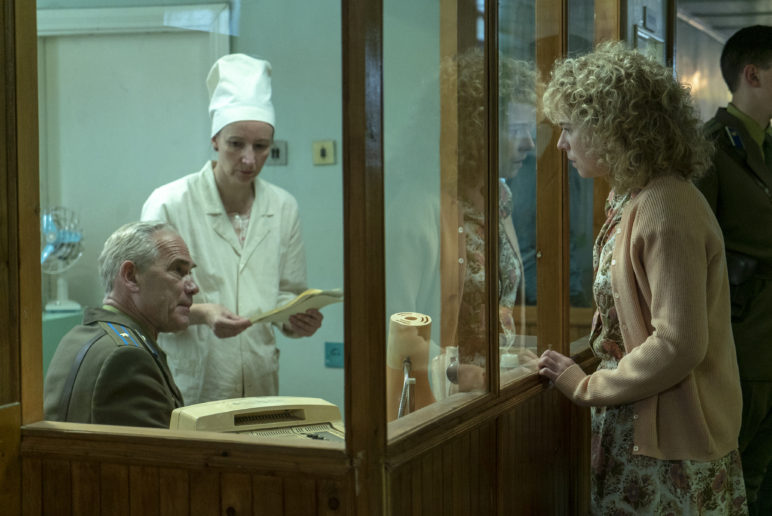 S&P:  Is there a particular track or scene that stands out for you in terms of score on this episode? What do you like about it?

HG:  The burial song has a strong place in my heart, which is the ending to Episode 2. It’s a beautiful scene and visually it’s so strong. It’s a heartbreaking moment. So, that was my most favorite scene.

S&P: This soundtrack is so emotionally heavy — eerie and melancholy, haunting and dark, and scary at times. Did you have to take breaks from writing this score? I can’t imagine living this soundtrack for 8 hours a day for months! I would need kitten pictures and glitter bombs to lighten things up…

Creatively, I feel quite comfortable in these darker emotions and the darker side of the moon, basically. My day-to-day personality is quite cheerful; I like to laugh and joke a lot. But my musical side is normally a bit heavier. It’s almost like the darkness has to come out somewhere. 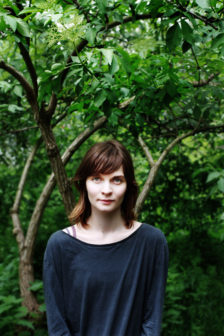 S&P: What are you most proud of in terms of your score on Chernobyl?

HG: I’m most proud of this crazy idea of turning a nuclear power plant into a musical instrument. It took quite a lot of stubbornness and persistence to not just grab an instrument and make a score. It would’ve made my life a lot easier when it came to writing the music. But, I took the high road in this musical sense.

I felt so strongly about this story needing factual music and that wasn’t always easy but I’m so happy that I chose that route. It was important to be as honest as I could and I could access that honesty through using the space as an instrument. I’m proud of actually being that stubborn.