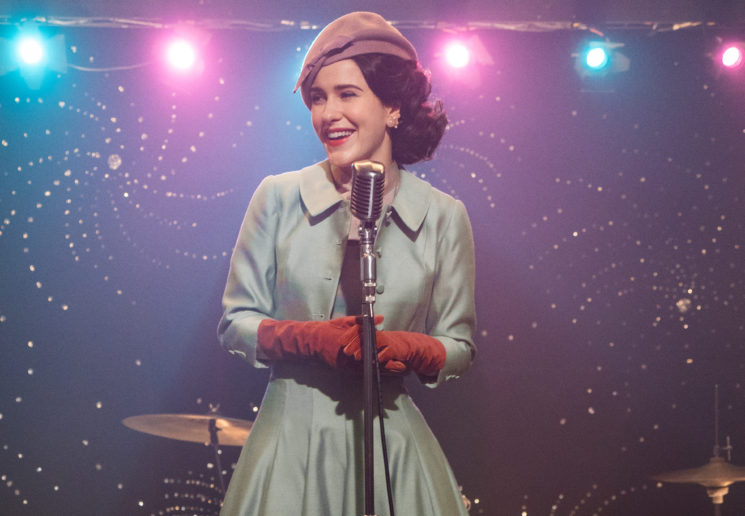 The Amazon Original series The Marvelous Mrs. Maisel is a marvel of television production. Creating a period film is hard enough, but creating a period series to this caliber takes talent.  The show is set in the late 50’s/early 60’s in New York City and all the period details are beautifully recreated, from the cars to the clothes to the Pyrex baking dishes. This Emmy season, The Marvelous Mrs. Maisel earned an incredible 20 Emmy nominations — for casting, music supervision, production design, costume design, hair, make-up, cinematography, picture editing, directing, and sound mixing. Production sound mixer Mathew Price, CAS, who’s been with the show since Season 1, is part of the sound mixing team that’s up for Emmy consideration for Season 2, Ep. 9 “Vote for Kennedy, Vote for Kennedy.” The sound mixing team has already won a C.A.S. Award for their work on that episode.

“Vote for Kennedy, Vote for Kennedy” opens on an entertaining table-hopping negotiation session as Susie (Alex Borstein) tries to get Midge Maisel (Rachel Brosnahan) a performance time slot on a Telethon. The Telethon itself was the core component of the episode, featuring numerous ‘live’ performances shot on vintage studio equipment and their modern day counterparts. The combination is a back-stage look at what a 1960’s Telethon was probably like.

Here, Price talks about his approach to capturing the series, how he handles Mrs. Maisel’s on-stage performances, and shares details on the unique challenges he faced while recording “Vote for Kennedy, Vote for Kennedy” and Season 2. 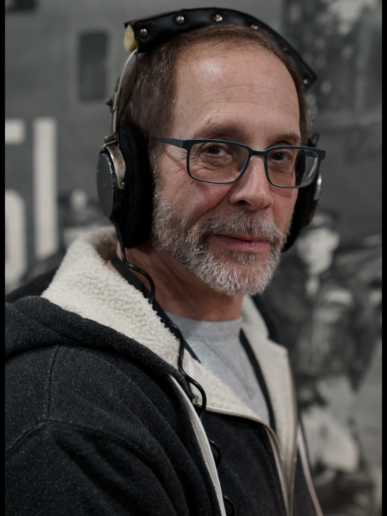 S&P: Overall, what’s your approach to capturing sound on The Marvelous Mrs. Maisel?

Mathew Price (MP):  My approach to mixing Mrs. Maisel is the same as my approach to everything that I mix, in that I strive for a clean, full and very rich vocal quality. My primary job is to capture the vocal performances as best as can be and Maisel is ALL about the words (and music). There are no car chases, gunfights or explosions so there is no hiding behind that. Our latest script for a one-hour show was 92 pages of fast-paced dialogue!

In terms of lavs, as most mixers will tell you, we do prefer a good boom mic over wiring but we shoot so many Steadicam oners (where we see in many directions) so it’s just safer for me to place lavs on our actors just in case they get out of range of the boom. Our #1 Midge (Rachel Brosnahan) always gets wired. Also, our two main directors (and creators) Dan and Amy Sherman-Palladino love their wide shots, often without much tighter coverage. Many times, characters start very deep in the frame and come into close-ups or vice versa. The mixing challenge there is finding the best spot to transition between the radio mics and the boom as seamlessly as possible.

With my two booms (operated by Carmine Picarello and Spyros Poulos), many wires, and often feeds from live mics for performances and/or from our Pro Tools playback mixer Egor Panchenko, it’s pretty typical that I’m easily running between 5-10 tracks (or more) on a regular basis. During the episodes where both of the families went to the Catskills, there were a few scenes where we had so many talkers that I brought in a second mixer (Julian Townsend) for the overflow. 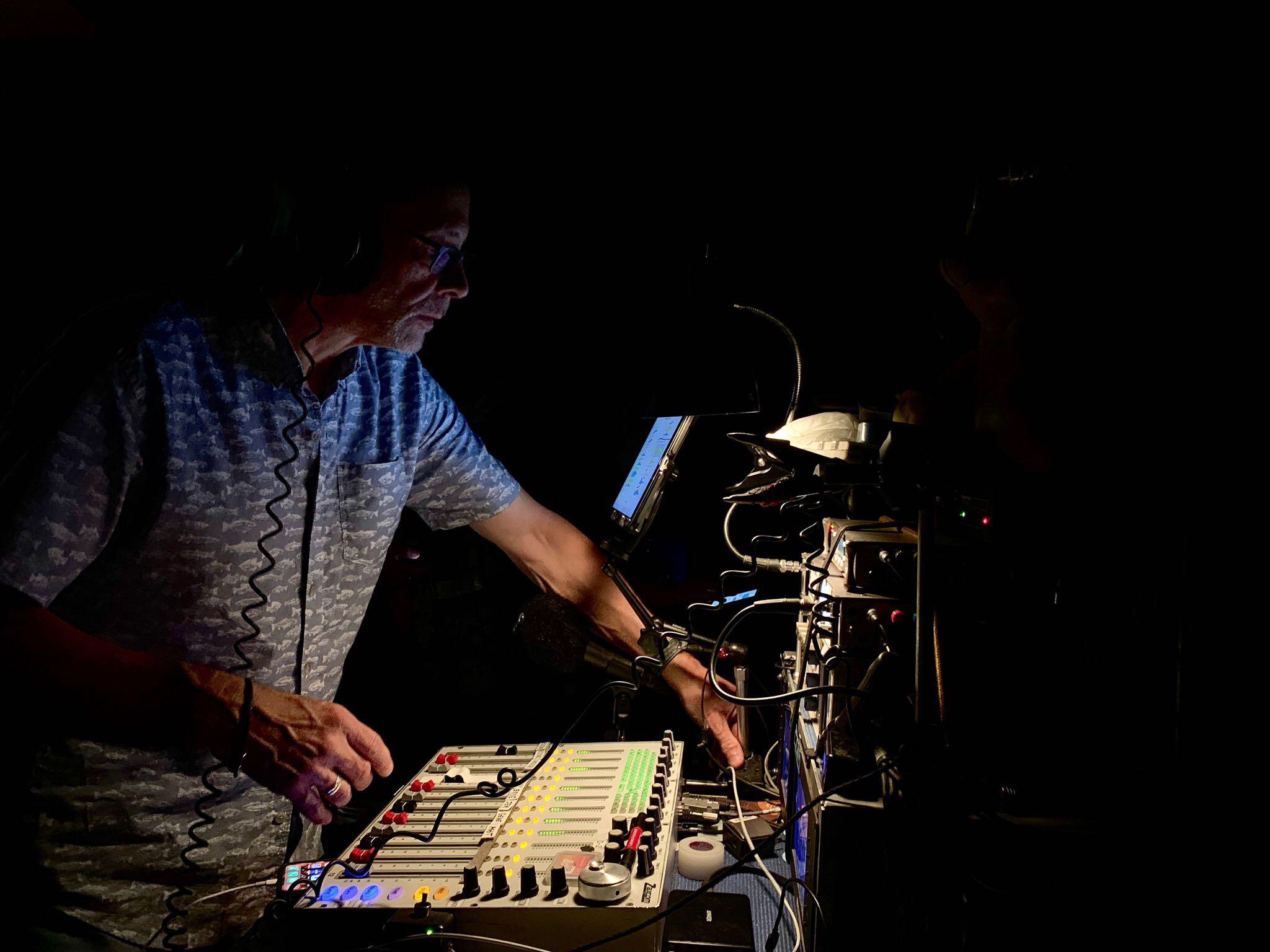 Mathew Price with his cart

S&P:  What does your cart include for this show? How about mics?

MP:  My core equipment is all Zaxcom now. I’m running a full RX-12 receiver unit, a Mix-12 and a Deva 16. I was an Audio, Ltd user for over 25 years but with the latest sell off (again) of our frequencies and the shrinking of the radio spectrum I’m very glad to have frequency agility and also the ability to record right on the Zaxcom transmitters. That has saved me many times already! Also, their ZMT transmitters are tiny and our cast loves them.

My primary boom mics are the Schoeps CMIT-5u and 41s. My lavs are generally Sonotrims, Sankens, Countryman B6s and the new Shure TL48 which I use exclusively for Rachel. 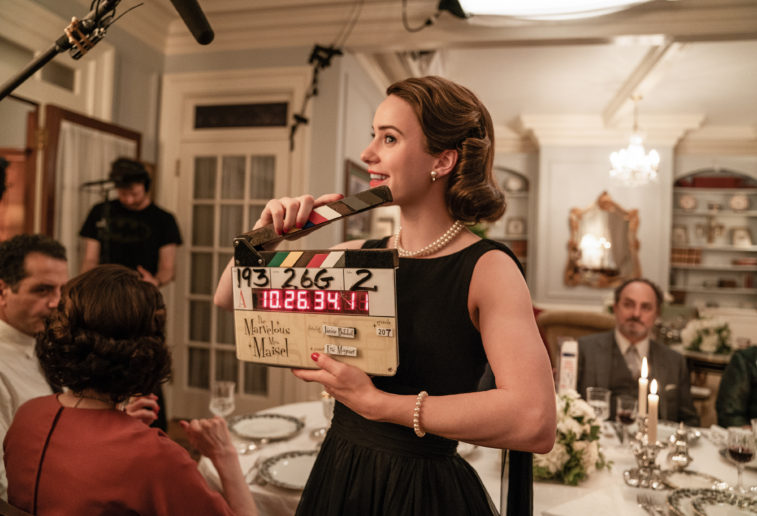 MP:  Our “Stage Deli” location is one of our regular practical locations (on Manhattan’s Upper West Side) and it can be challenging because there are mirrors on the back wall and also on the columns. Often what I’ll do is wire the main character in a scene which frees up my boom op (Carmine Picarello) to move around and get our secondary characters. Actually though, the opening scene with Susie wasn’t too complicated because it was mostly covered as individual shots. 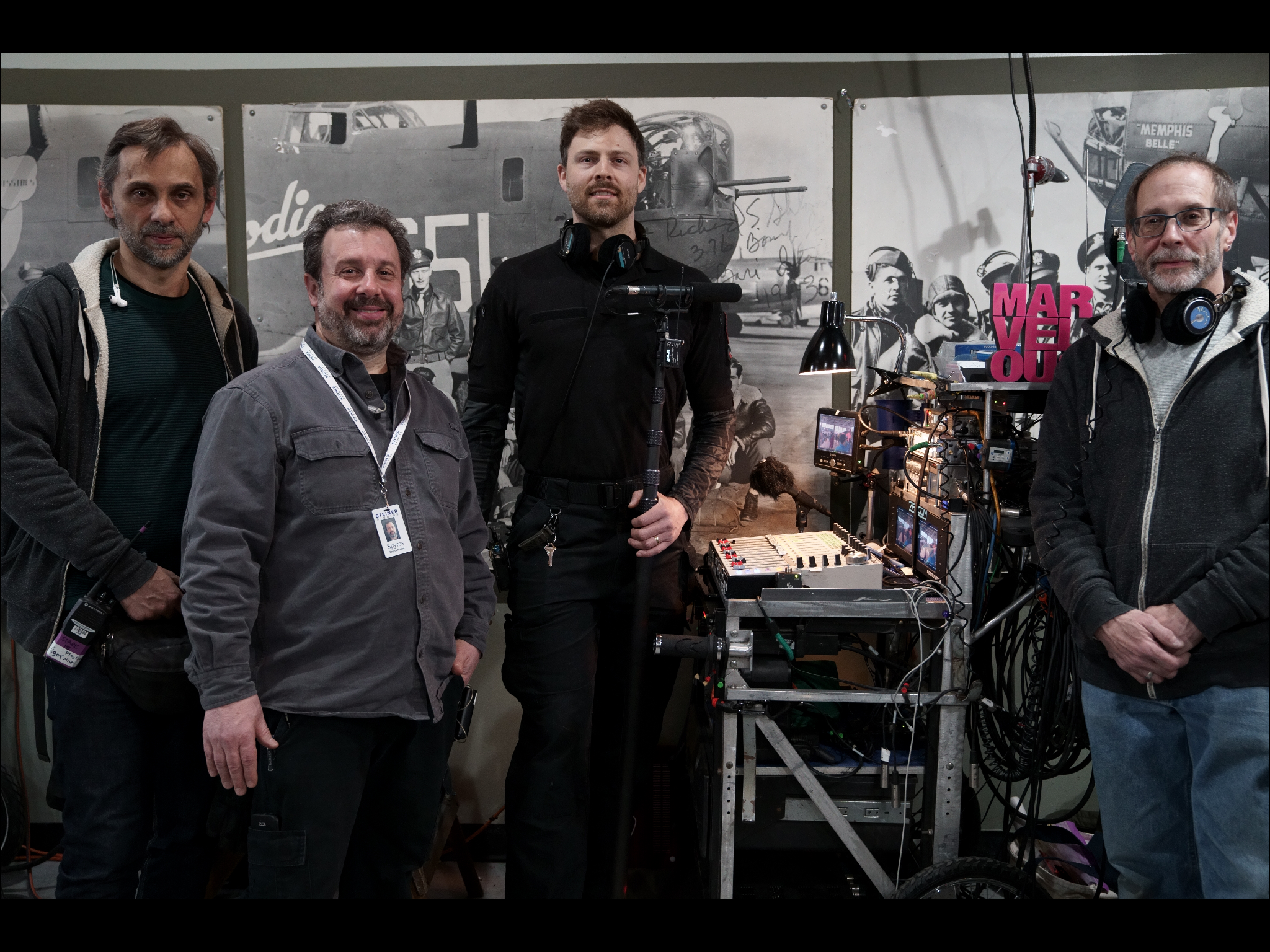 S&P: What were some challenging scenes for production sound this season and how did you handle them?

MP: Other than the Telethon, the other scenes in that episode were much more straightforward with the usual challenges of the large cast and rapid-fire cues for dialogue that always keeps us on our toes. The thing about Mrs. Maisel is that the quality of the show is so unbelievably high there’s the expectation that all of us bring our A-plus game to everything we do and it’s all on the screen in the end.

In previous episodes, especially Ep. 3, that take place in the Catskills, we did stuff like put a camera across the road from the Weissman cottage on a wide shot for 4–5 pages of dialogue where everyone was yelling to each other from all the rooms and from inside to outside. It was such a great challenge to just wire them all and hold on for dear life! 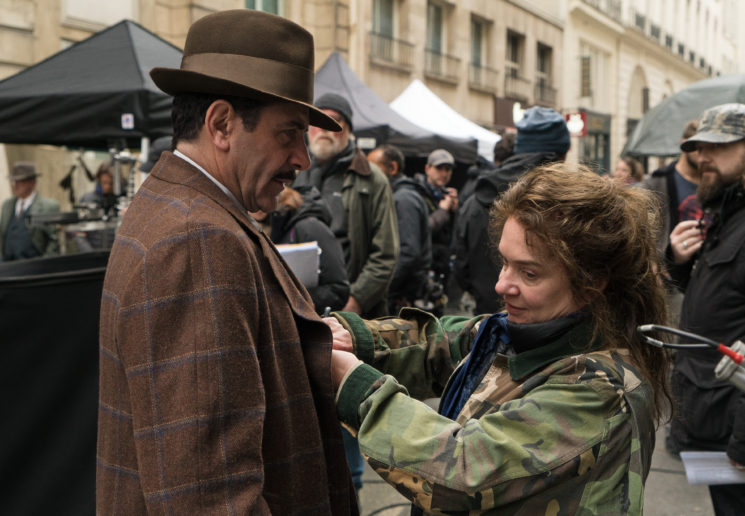 S&P: Can you tell me about your collaboration with Dir. Palladino and DP M. David Mullen? How did you work together to achieve optimal conditions for production sound?

MP: In terms of collaborating, I approach the job as the challenge of trying to make it work with what’s given to me. Of course, we ask the grips for flags and such to help my boom ops do their job and sometimes we’ll ask to shoot a wide and a tight separately, although one of the great joys of mixing Maisel is that we often shoot with only one camera so it isn’t often that I have to fight the wide/tight problem. 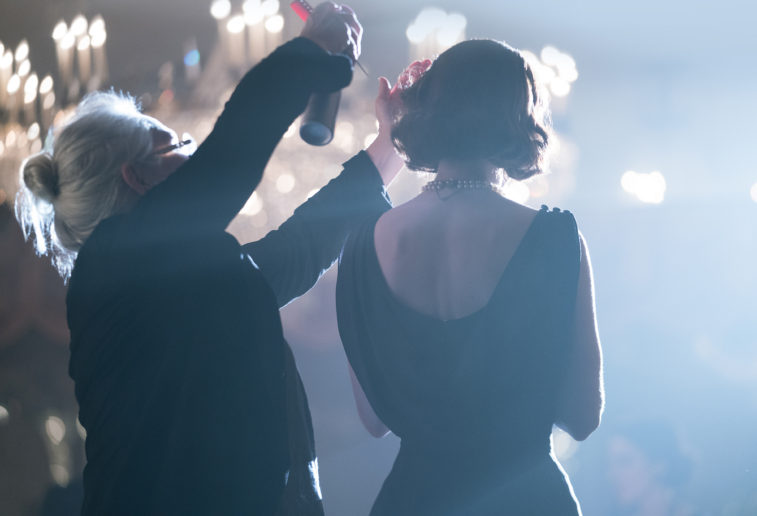 S&P:  When Mrs. Maisel is performing on stage, how do you mic her performances?

MP: As with a lot of the live performances, the use of hard spotlights makes it virtually impossible to boom the dialogue in a consistent way without throwing a shadow, so we always wire Midge for that. The tricky part is getting the wires to be extra clean because the post sound team spatializes the tracks with different amounts of delay depending on the size of the space, and it’s no good if there’s any scratchiness on the mics because then that gets into the mix.

The real improvement between Seasons 1 and 2 is that we worked with our great prop department and Gotham Sound to modernize the on-camera vintage mic shells with new Shure lav elements so that they’re now really great and natural-sounding practical mics. That is now my primary source for all of the live work. 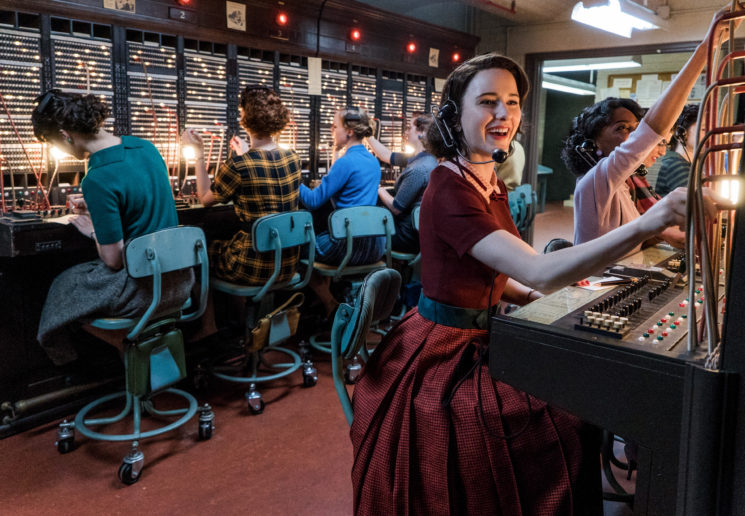 S&P: During the Telethon, what were some of your challenges for capturing sound?

MP: The Telethon was shot over five days and was particularly challenging because the way we were shooting it was with our own Alexa cameras as well as with working vintage studio cameras that were fed to old black and white monitors where we often saw shots of their own. So, in effect, some of the setups were with five or six cameras! And because of that our amazing DP David Mullen (affectionately called “The Professor”), had lights everywhere including follow spots which made it virtually impossible to boom almost anything except when we were facing away from the stage towards the audience. We did plant some mics by the phone banks where they were taking pledges.

Also, when we shot in the control room with our four actors they were constantly all talking and yelling at the same time so I wanted our post sound people to have each one on their own iso track so they could rebalance them later if they wanted to. 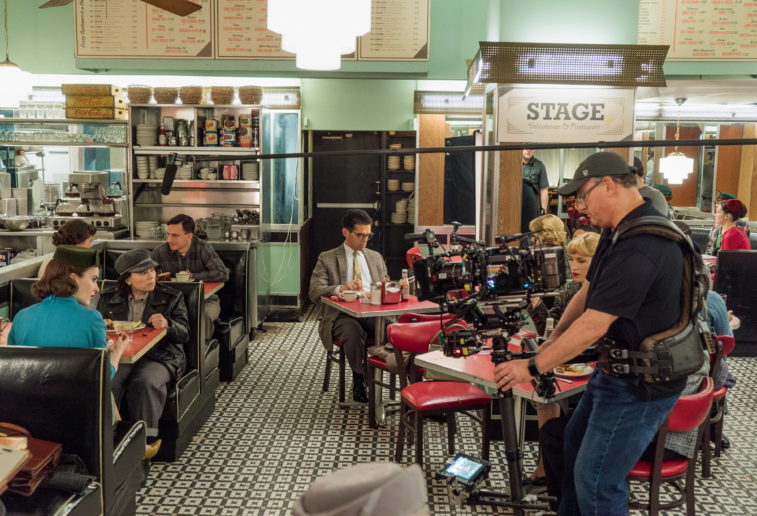 S&P: What about ambiences and production effects? Do you have time to capture those for the post sound team?

MP:  We do record wild tracks when needed, mostly various types of audience reactions for our performances so our post sound people can layer in backgrounds, but our hands are pretty full just handling the daily requirements so we don’t really have much time to go out and record ambiences and FX. Not to mention that it’s a period show set in the ‘60s so many modern ambiences wouldn’t be appropriate. 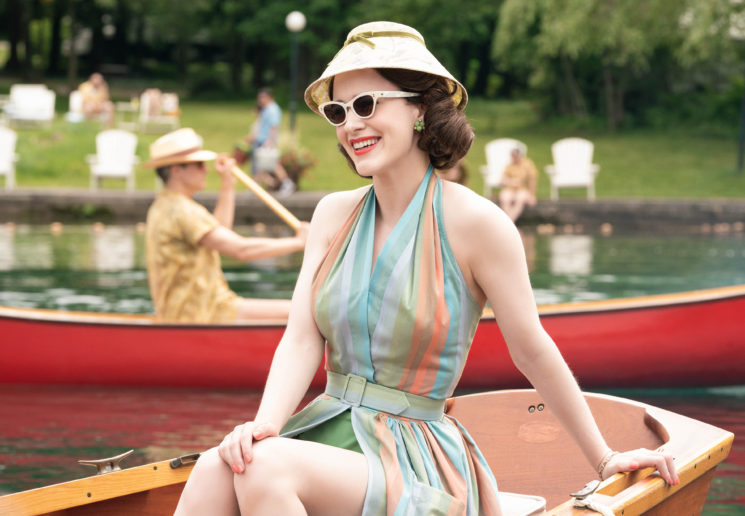 S&P:  What would you want other sound pros to know about the production sound on The Marvelous Mrs. Maisel?

MP:  The one thing I’ve really learned from Maisel is to embrace the wires. Look, I’m old school and would love nothing more than to boom everything all of the time. I started my career with a mono Nagra and a 416 but it’s just not practical and often not even possible to do that with the way films and TV shows are shot now. So my advice is to really hone your wiring skills. I cannot tell you how many scenes we do on Maisel that are all wires, although I always mix in the boom to bring it alive.

But the show wouldn’t sound half as good as it does without the miraculous work of Ron Bochar, CAS, our re-recording mixer, and of course, the amazing vocal skills of our cast. I am so very fortunate to not have a mumbler or whisperer amongst them!