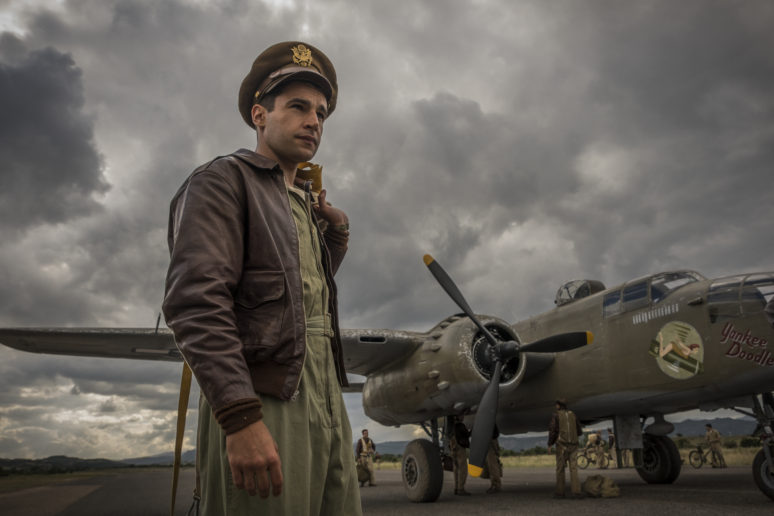 Catch-22 – a paradoxical situation in which one gets stuck due to the contrary/conflicting parameters of said situation. It’s a term coined by author Joseph Heller for the no-win position in which fictional WWII bombardier John Yossarian and those in his Army Air Force squadron find themselves.

Heller’s 1961 novel was brought to life as a Hulu Original series developed by Luke Davies and David Michôd. The series earned two Emmy nominations — one for Special Visual Effects in a Supporting Role, and one for Sound Editing. Visually, the series convincingly captures the world of the 1940s, but it’s the sound that makes it feel real, from the metal rattling hull of the plane’s fuselage to the crunch of the soldiers’ boots on the dusty ground. Those Foley sounds played a key role in helping to bring the audience into Yossarian’s world.

Here, Warner Bros. Sound Foley artists Catherine Harper and Katie Rose talk about their collaborative approach to Foley, the scope of Foley on the Emmy nominated “Episode 1,” what went into creating a 1940’s sound, and how they blended their Foley with production effects to create a seamless result. 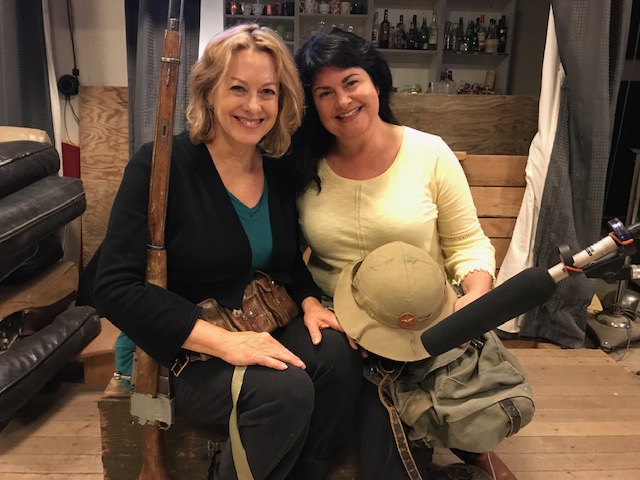 S&P: How did you two split up the Foley on Catch-22? Was it divide and conquer or did you work together?

Catherine Harper (CH): We always decide based on sound. Sometimes one of us will have an affinity for a certain character and will want to perform that walk but more often than not it’s about whose shoes we think will sound the best.

Katie Rose (KR): We like to be on the stage together and contribute to each other as much as possible, even if one of us is walking a single character. We respect each other’s opinion very much and have fun collaborating. 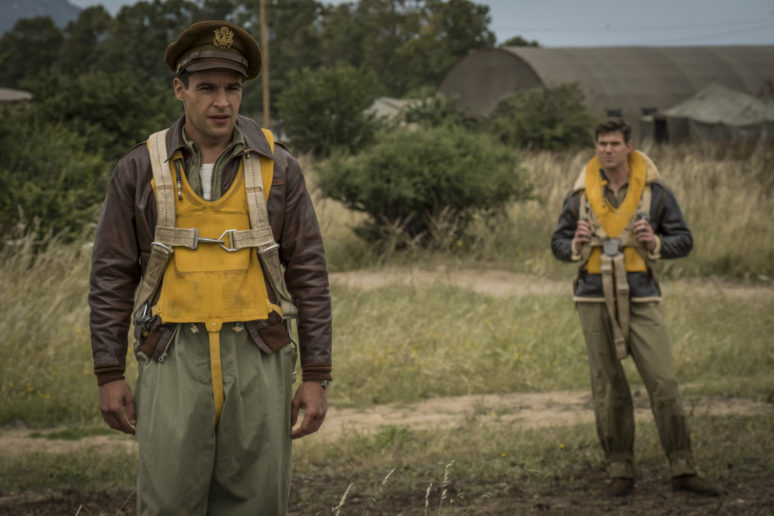 S&P: Because you walk Foley together, what does your mic setup look like?

CH: Sometimes we walk together but all of the main characters on this show were walked individually.

We use a variety of microphones depending on what is needed to match the production in a particular scene. Sometimes we used two KMR’s (KMR 81 and 82), one for a room mic and one for close-up, depending. We also used a Neumann U 87 and a Sennheiser 8060 for some of the props.

KR: If we are walking together, we generally position the microphone in front of us in equal proximity from us. Sometimes with props, I will favor a microphone such as the U 87, while Catherine is more directional with a KMR. For example, when recording multiple items of soldier gear at the same time, this can help round out the sound. 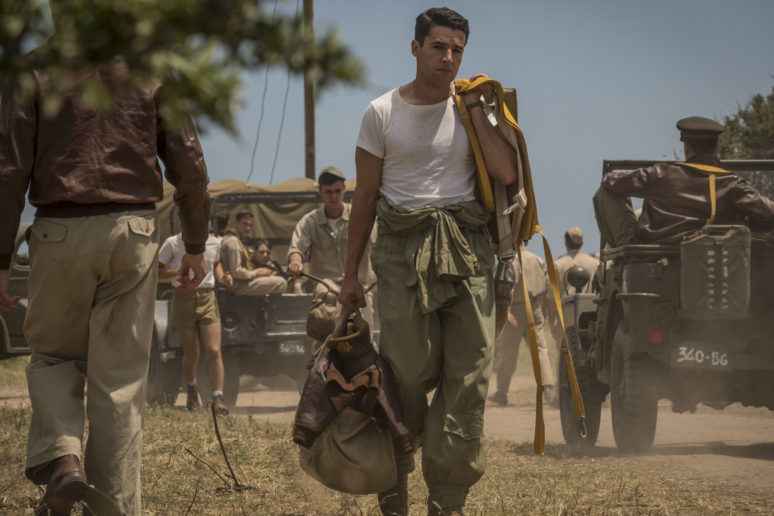 S&P: Since Catch-22 takes place during WWII, what were some choices you made in terms of cloth weight and types of shoes? What were some of your go-to objects/props for this show?

KR: The shoes in that period mostly had harder soles even for the soldiers, as opposed to the rubber soles on combat boots today.

CH:  When I was prepping for the show, I just happened to find this old pair of worn leather boots in a thrift store. Not only do they look like they could be from the era, they sound like it too! They worked perfectly for John Yossarian (Christopher Abbott) so that’s how I ended up playing him. Katie had a beautiful pair of hard-soled leather shoes for George Clooney’s character, so she played him.

KR: We also have a whole section of older WWII-era props such as rifles, guns, heavy canvas backpacks, metal ammo boxes, and plenty of leather. We have belts with different kinds of heavy metal carabiners to accentuate some of the gear they’re wearing, like the parachutes and vests that are strapped to them.

CH: We wanted the Jeeps to match the stripped-down metallic sound that we heard in production. The stage is filled with a wide collection of different car door parts (believe it or not!), so we combined a few of them to resonate together. Fortunately, they ended up working so seamlessly with the production track, it was hard to tell the difference between what was Foley and what was production. That’s definitely part of our signature trademark. We like to do that.

KR:  There were opportunities to create nice tent interiors with cots and creaks and pieces of plywood for raised floors. We were able to bring alive the rustic feeling of those scenes as well. 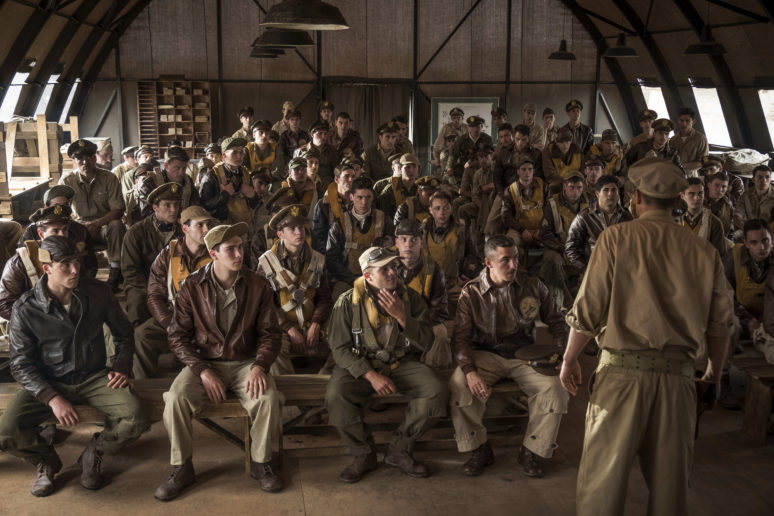 S&P: Since it’s the military, most of the guys wear the same uniform. Did that make it easier to do the clothing movements? Or more challenging because you want the main characters to stand out from the others?

KR: It depended on the scene. The uniforms were the same, but sometimes one character was wearing a leather jacket or some kind of gear which we would have to separate on its own channel. We did want to accentuate their personality in their movements as well as footsteps as much as possible.

CH: I think the best part of re-creating all of these guys in their uniforms was the fact that we are two women! :) 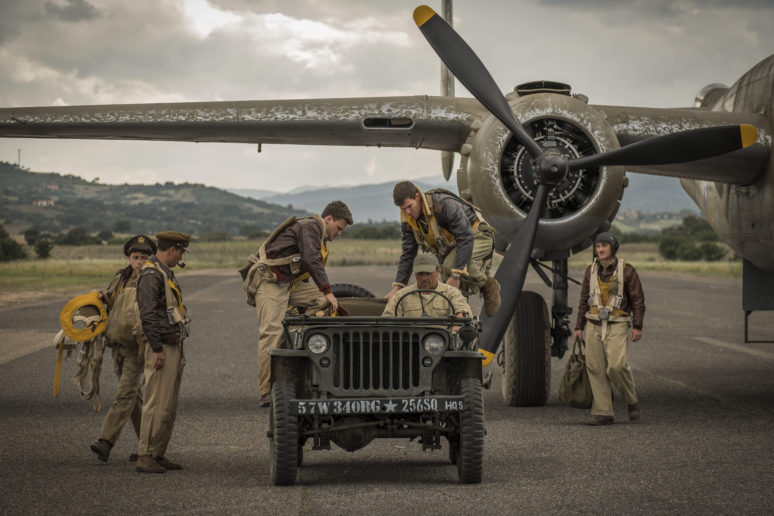 S&P: What was the scope of Foley on Catch-22? Did you cover the interior plane rattles and switches? Tires on the tarmac? Movement of the crew through the plane? Flags, tents, and parachutes flapping? The swimming and water movements at the seaside?

CH: Exterior ambience was important to our supervising sound editor Jerry Ross. Since so much of Episode 1 took place outside, we were asked to perform those ambient sounds: flags, tents, and parachutes flapping. The filmmakers did such a fantastic job capturing the look and feel of WWII that we wanted all those sounds — interior and exterior — to enhance what we were looking at.

KR:  We did create some interior cockpit rattling in one scene. We also had some old switches resonating against metal.

The plane was a lot of fun because we did have to walk around on metal for it. We have this gorgeous metal surface and we can also resonate things to make it sound more cylindrical, just like you are inside an airplane fuselage.

CH: We didn’t Foley the swimming sounds, but we did perform the moments before Yossarian jumps into the water, as he’s walking up to the cliff across gravel with hard rock and dirt. In an effort to bring all of that to life, we brought in different forest materials such as crushed pine needles and mulch. His walk was silhouetted against the backdrop of the ocean and we wanted to make that sound as authentic as possible. 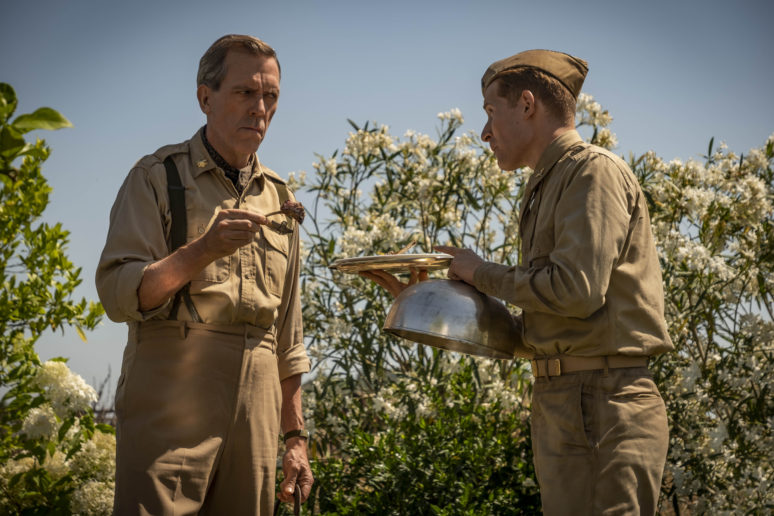 S&P: There was a nice little scene with Yossarian washing his face in a bowl of water outside the camp in Italy. You hear the splash of the water and the dabbing of the cloth on his face…

CH: I think performing subtle, natural sounds in a realistic way is oftentimes underrated in our profession.

There was one faint little splash you heard in production that definitely needed to be augmented. We wanted our Foley sounds to blend with that. We found this old porcelain bowl and the layers of porcelain were coming off and the metal was exposed. So that was the perfect prop for the scene. One of us was holding it suspended in the air while the other was performing the sounds. That way it would sound like it was there, outside.

KR: And a shallow dish sounds a certain way, not like a sink. 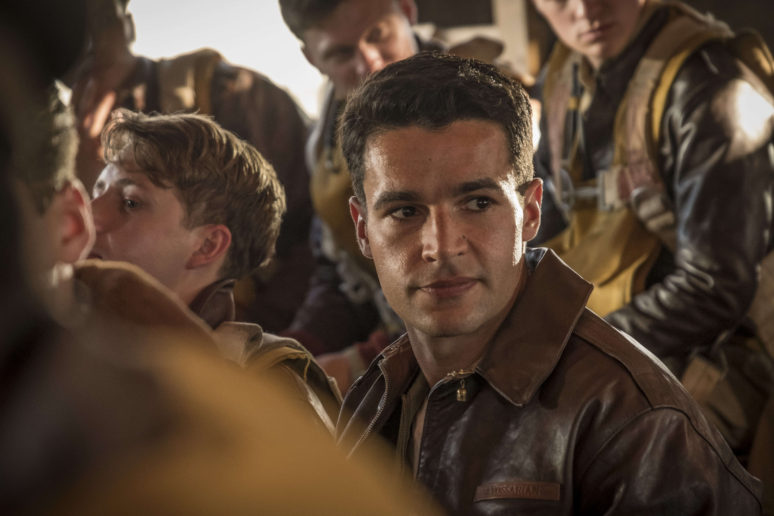 S&P: In regard to the Emmy-nominated sound editing on ‘Episode 1,’ what was the most challenging scene for Foley?

KR:  For me, I think it was the mess hall scene. The guys are talking and lined up and they’re being served this food from giant pots. The food is sloppy and liquidy. Getting that to sound like it was happening in that mess hall — with the close-up shots and faraway shots — we wanted to make sure that it sounded specific and natural, but the food needed to stand out a little.

CH: Yossarian didn’t seem like he was too excited about eating that food. So, we wanted to make sure that it sounded off-putting.

KR: We couldn’t be cartoony about it. It had to sound natural, so we used real oatmeal. 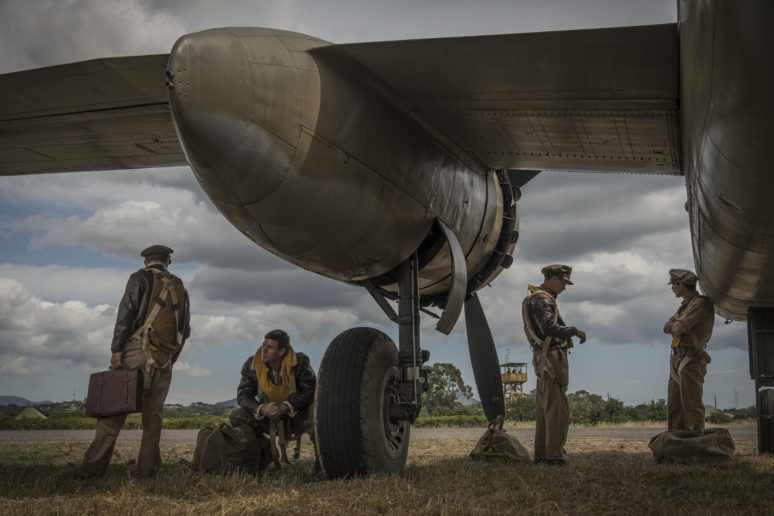 S&P: What were some of your favorite moments for Foley in this episode?

KR: We had this marching scene that was challenging to do because there were different cuts and sometimes the cuts weren’t in rhythm and yet you want them to sound like they are marching uniformly. So we would wear headphones and sometimes I wouldn’t watch the screen; I would just watch Catherine. This way I was walking the same way that she was walking. We had to do layers and they couldn’t sound like they were all walking out of sync with each other. So when we finished off that scene it was really rewarding to hear them marching together and then stop.

CH: We wanted every cut to blend or punch depending on the visual…

KR: And to be in rhythm. 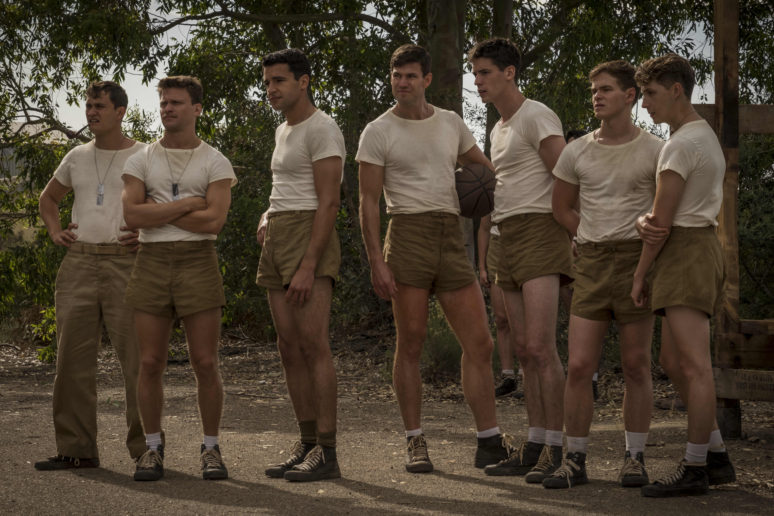 S&P: How many layers of marching did you have to record to make it read?

CH: I think it was only three, but then we’d punch the close-ups on a separate track.

Then, Clayton Weber — who was the Foley supervisor and sound effects editor — did a beautiful job to make it all perfect and blend together. 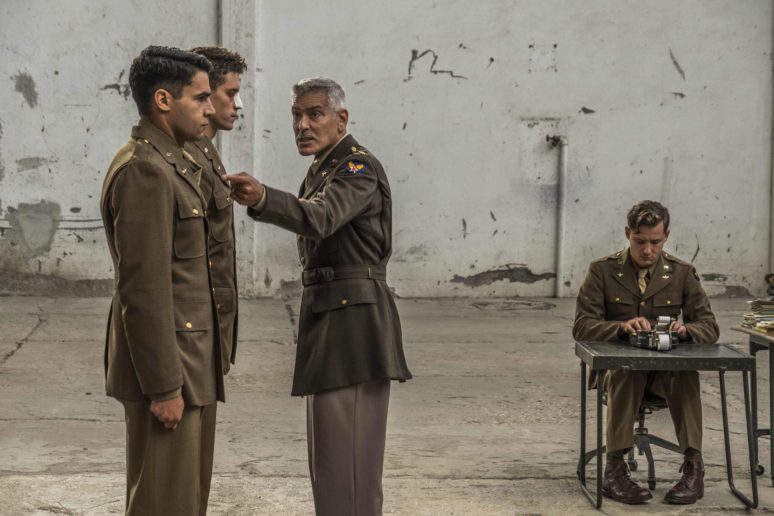 S&P: There’s a stenographer recording Scheisskopf’s (George Clooney) disciplinary trial of Yossarian and Clevinger (Pico Alexander), following Clevinger passing out during the drill. Did you cover that in Foley?

CH: We did cover that in Foley, but I’m not sure what they used for the final sound.

We have a variety of old typewriters and adding machines, one, in particular, sounded almost exactly like one of those period stenotype machines. 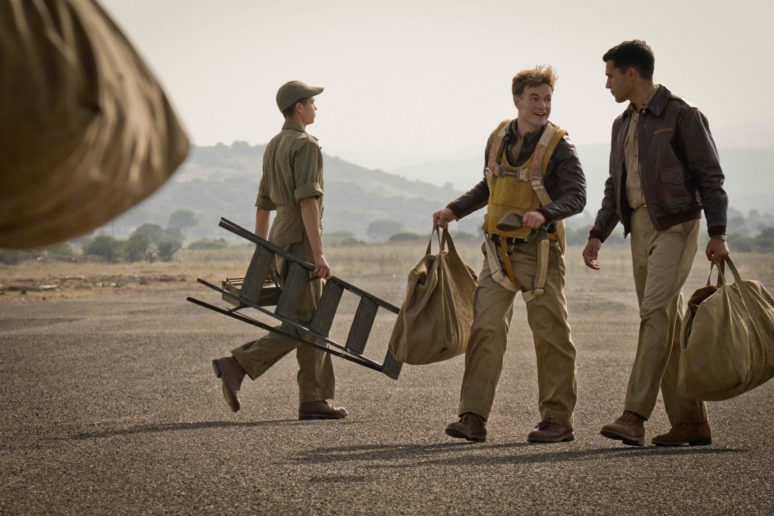 S&P: What would you want sound pros to know about your Foley work on Catch-22? What’s unique about the Foley on this show?

KR: It was very important for us to be as organic as we could be and have the Foley sound natural. The attention should be with the story, the actors’ performances, the style and look of the show. Our desire was to enrich the quality of the show and not be noticed.

CH:  For me, what was so satisfying about this project was to be part of such a quality production for television. We were grateful to be asked to participate. I consider working on Catch-22 to be one of the highlights of our year. We really enjoyed it.

KR: We were sad when it was our last episode. It’s not always like that.